As with most mom’s of little one’s, I’ve been on the search for a good trainer cup for my now 10 month old, Shelby.  I tried a couple that had good reviews on Amazon.com, but the spouts seemed to difficult (even for me) to get anything worth the effort to “drink.”  I tried one of the super soft spouts that was closer to Shelby’s bottle nipple, and found it too soft and she still didn’t care for it.
In my search for the next great item, I found one that I was on the fence about ordering.  When I earned some amazon credit from one of the savings sites I use, I decided that since it wouldn’t cost me anything, I was going to give it a try!
So WHAT is this interesting item?  The Philips AVENT BPA Free Natural Drinking Cup, Green, 9 Ounce 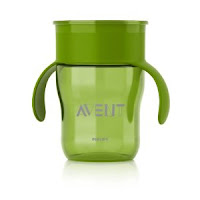 Observed before first use:

Shelby’s reaction to the cup was amazing and I’m wondering if we’ve found our answer to transitioning from the bottle.  What I have observed during use:

I’m excited to continue use of this cup, and I think Shelby will be too! And, it’s reasonably priced if it happens to be the cup Shelby takes interest in!