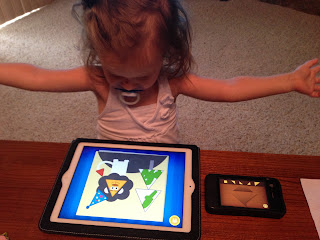 I got wind of a fun preschool iPad app, called Shiny Party, when it was free for a limited time.  Since I don’t like paying for apps, FREE for a limited time meant I needed to check it out fast.  It received spectacular reviews in iTunes, so I immediately hit the download button.
I waited a few days to try it out since we had just moved, but my daughter got sick and needed some activities to sit down with quietly. In a moment of desperation, I opened Shiny Party on my iPad and handed it to her and watched in amazement.
At 21 months, my daughter understands how to operate the iPad and picked the part of the Shiny Party app that she wanted to explore.  There’s an interactive story mode with activities or you can skip straight to the activities in “game mode”.  She chose to go to the 4 activities straight away.

The games are:
* Build a cupcake: The first cupcake is build based on what your preschooler chooses.  Cupcake liner, cupcake “flavor”, icing, sprinkles, and a decorative topping piece.  Subsequent cupcakes need to be built by matching a photo
* Shape Puzzles: build various objects with shapes in blank spaces (typical puzzles for her age show the picture of the object to go in its space).
* Find a shape: The app will show your preschooler a shape then ask them to color only that shape in a picture
* Match blitz Jr: shape and pattern matching game

I watched in amazement as the Shape Puzzles portion of the app became her favorite.  She was quickly placing her pieces in the puzzle spaces and on occasion dragging a piece over a spot, shaking her head saying “uh uh”, then sliding it to the space it should go.  When the puzzle was complete, the app would paint the whole picture and animate some of it (a boat puzzle would end up in wavy water, a dog would end up in grass barking, etc).  She’s now turning on this app regularly and typically goes straight to the Shape Puzzle app.
One of her other favorites is the Build a cupcake portion.  I watched as she would build a cupcake to spec, then, realized that the characters would make funny noises/faces if she got one wrong… this quickly became hilarious and she decided building the correct cupcake was no where near as fun as making the characters act funny.  If I hear her giggling, it’s because that’s what’s she’s doing at the time.

Very often she’ll take my ipad (I guess the iphone isn’t big enough for so much fun) and go straight to this app.  It’s a great way to take a quiet break from whatever else is going on and it makes her happy.

Shiny Things, the makers of this great app, also make several other apps for various ages, including Shiny Picnic for your little ones.  I can’t wait for baby girl to try Shiny Picnic!