Should You Visit SeaWorld With Your Kids?

written by Ivy B July 5, 2018
This post contains affiliate links which may earn me commissions should you click through them and take certain actions. As an Amazon Associate I earn from qualifying purchases. See full disclosure here.

Thinking about taking kids to SeaWorld Orlando?  If you’re considering travel with young kids and exploring SeaWorld, check out our thoughts on the kid-friendly entertainment first.

After the drama the kids caused at Discovery Cove, I told them I would be happy to bring them back to the condo to sit inside all day.  If they didn’t want that to happen, they weren’t to give us adults trouble at the park.

This time, however, I decided to head to the park with zero expectations.  The only thing I wanted out of the day was for the kids to enjoy themselves.  If that meant I only rode kiddie rides and viewed animals in the aquariums, that’s how it was going to be.

Amazingly, the kids’ attitudes were better at Sea World than at Discovery Cove, which is, honestly, somewhat annoying since Discovery Cove is where all the money was spent.

Here’s what you need to know about Sea World Orlando in 2018. 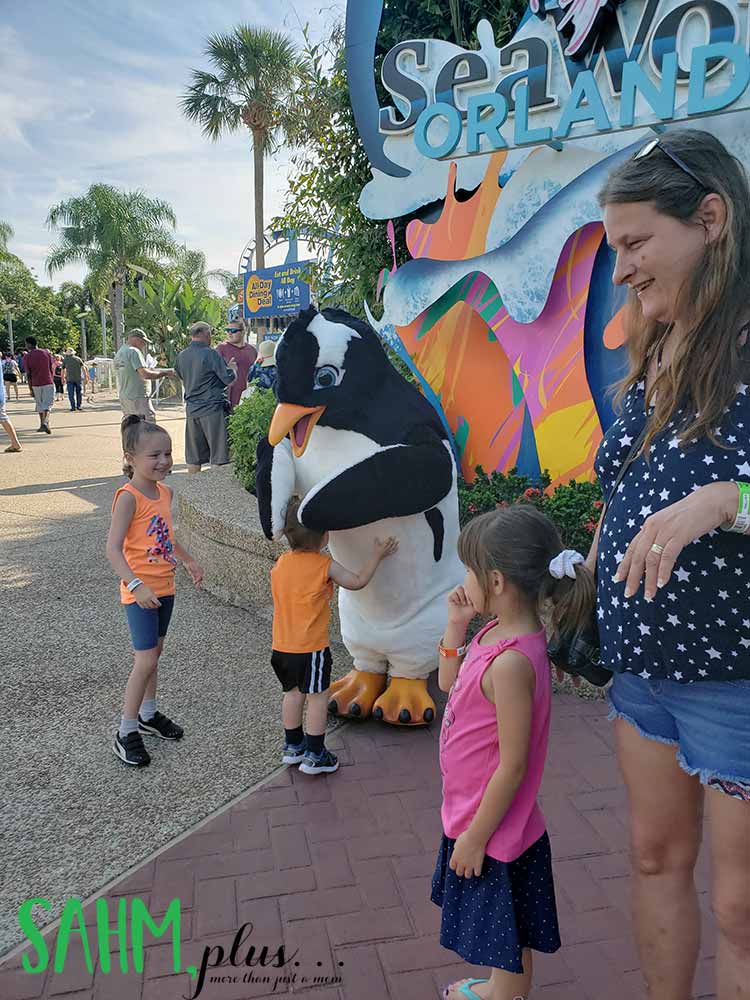 I’m not informed or involved in the controversies or debates over SeaWorld Orlando.  That said, I’m not here to debate either side, but definitely believe there are more sides to the story than just the outrage people have with SeaWorld.

I’m a huge fan of zoos and aquariums, so I don’t get involved in the debates over whether or not I should support them and places like Discovery Cove or SeaWorld.

Confession: I don’t know enough about each side of the debate to make an educated decision on which side to stand.  I went because we had free entry after my father took us to Discovery Cove and I feel as if I frequent zoos or other aquariums, I can’t say I’m against SeaWorld.  And, that’s as much debate as I have in me over this subject *wink*. 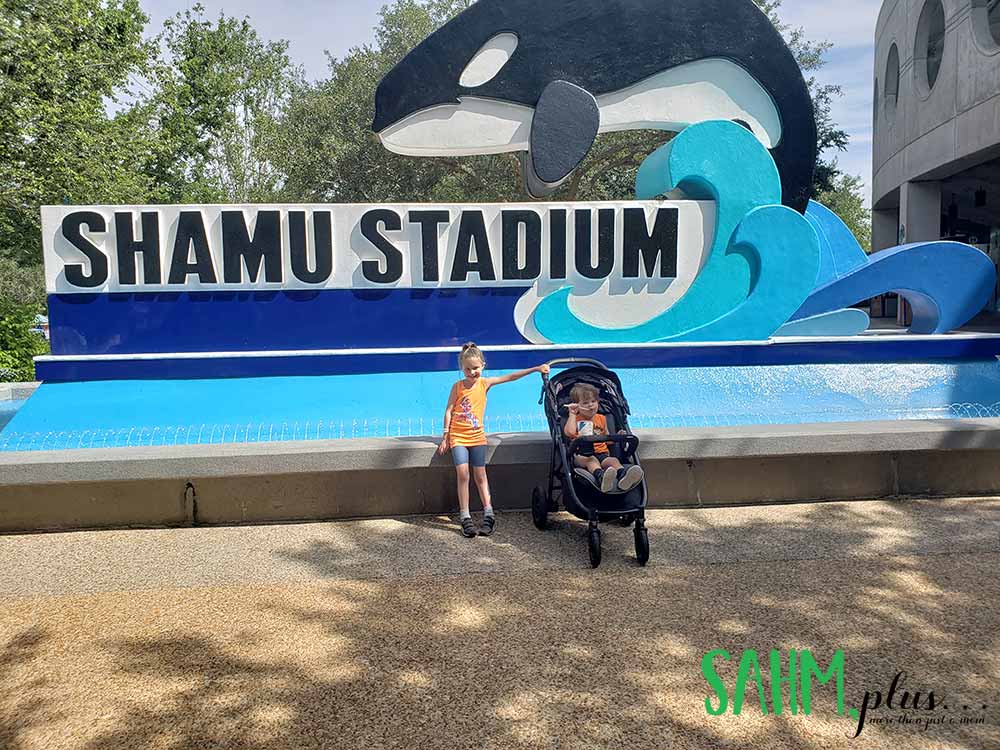 Our Experience Taking Kids to SeaWorld Orlando in 2018

When taking kids to SeaWorld Orlando, especially young children, you’re going to wonder about the food!

Kids may not eat much at one sitting, but they sure know how to snack, don’t they?

Go ahead and purchase the All Day Dining Deal!  At $35 for adults and $20 for kids, you’re likely to think this is outrageous.  However, when you pay $8 for a kid’s meal 3 times a day, you’ve more than paid yourself back.

To make the best use of the dining deal, plan to arrive at the park in the morning for breakfast and have lunch and dinner in the park.  There is one restaurant that opens at 9 am to serve breakfast.  With the 3 meals, you’ll have saved 4 dollars.   A full meal is available once per hour throughout the day.  We utilized our dining passes for snack times as well.

But, that’s not all.  Throughout the day, you can stop at any of the smaller kiosks for drinks.  Fountain drinks, ICEEs, and bottles of Dasani water were free.

Fair warning … if you have a toddler and believe them to be capable of eating enough throughout the day, go ahead and purchase the dining plan for them.  We hadn’t done so for my 2.5 year old and I regretted it because we either had to pay full price for his meals or share from our plates.  Personally, I eat a lot so sharing from my plate isn’t a feasible option.  Luckily, however, we had several kids and adults with us, so we let him pick off everyone’s plates.

Finally, be very careful to know what counts as a kid’s meal or you’ll be forced to pay full price for an adult meal if your child chooses something that isn’t deemed a kid’s meal.  On one occasion, my daughter wanted a fish sandwich and I hadn’t payed attention to realize that wasn’t available for kids on the dining plan.  When I placed the order for her in line, I pointed to her directly to let them know she wanted the fish sandwich.  Nothing was said to me until we went to scan our dining plan wrist bands and was then told her meal wasn’t covered.

There wasn’t a single location in the park that we stopped at during the day that wasn’t able to accommodate my gluten allergy.  I’m not sure about the small snack kiosks, but all the restaurants had something for me.

In order to get allergy friendly menu options for yourself or your kid(s), simply tell one of the staff members about your allergy.  They will get a manager who will help to determine what you need and make a separate plate for you.  Usually  you get your food by the time you reach the end of the buffet line with the rest of your crew. 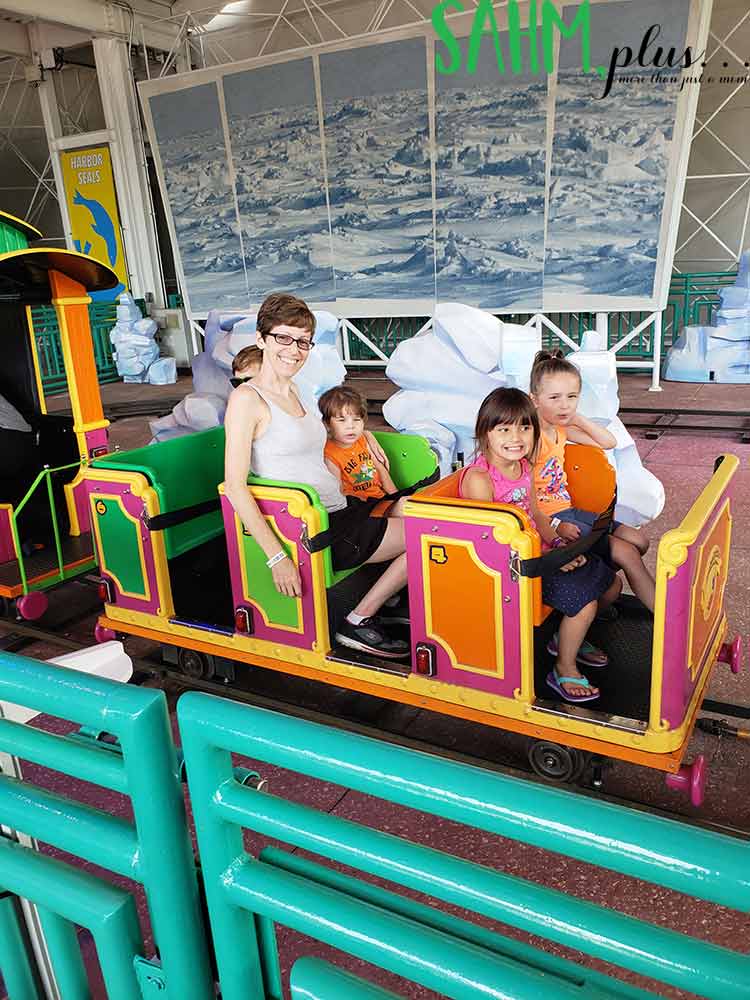 One of the most important factors in determining if taking kids to SeaWorld Orlando is a good idea is whether or not they have enough rides to keep them happy.

When we went in June 2018, Shamu’s Happy Harbor was closed for construction, so some rides were not operating.  On the outskirts of the construction, we were able to find about 5 little kid rides.  While the tiny tot enjoyed the few rides we did, they were more like carnival rides.  Even the small kid roller coaster was down.

Because of the confusion with the closed down section, we often spent more time walking to find the rides that we did actually riding them.  This was a little frustrating, especially during the time the toddler was missing his nap and getting cranky.  Add the Florida summer heat, and we were all getting worn out.

Now, the oldest isn’t quite big enough to ride any of the bigger rides, but she just passed with Wild Arctic.  I’m not fond of the motion simulated rides because apparently I’m now getting motion sick on them (thank you, age).  But, my daughter absolutely loved this ride. 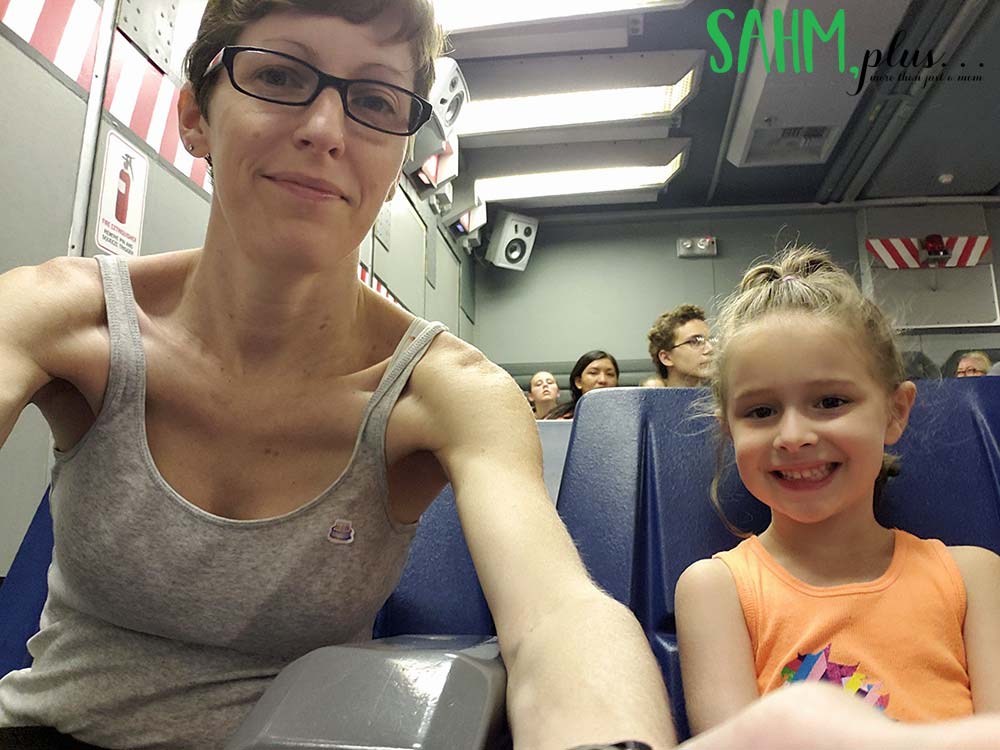 I’d be interested to see if there are any planned additions to the kids rides in the future. 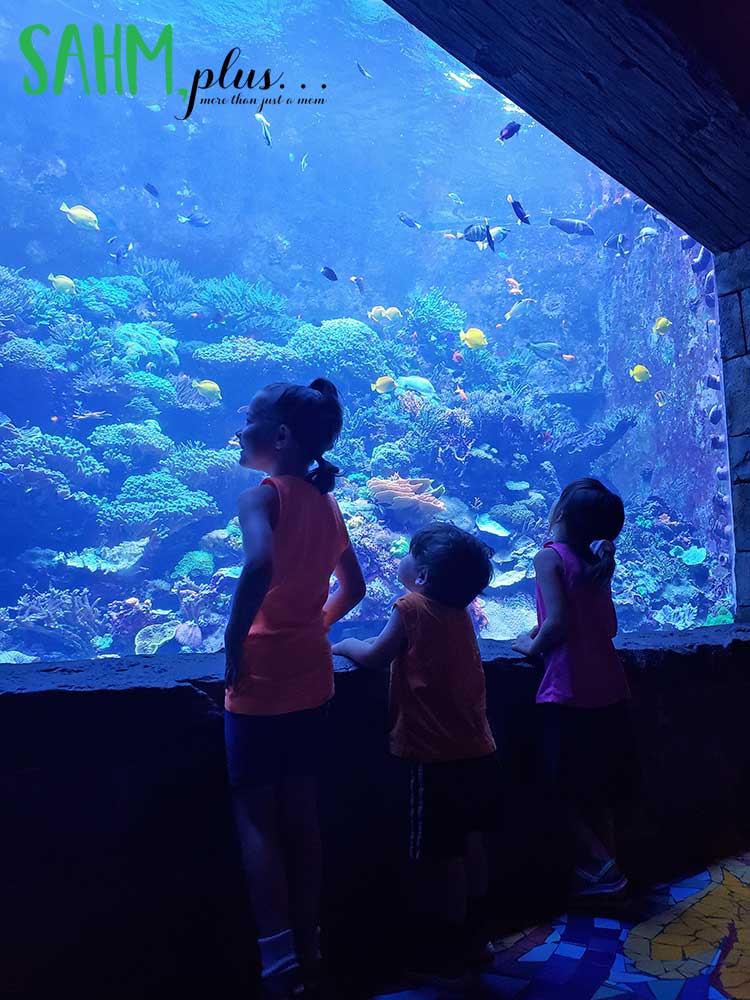 The kids thoroughly enjoyed the aquariums scattered throughout the park.  When we entered the first one, I told our friends they were welcome to go enjoy the park on their own time.  I could tell we were going to spend a significant amount of time admiring the aquatic life in the aquariums and didn’t want to hold them back.

I allowed the kids to ooh and ahhh to their hearts’ content.  It made the day a little more relaxing than pressing on to find the next thing, which I really believe helped with the kids’ moods! 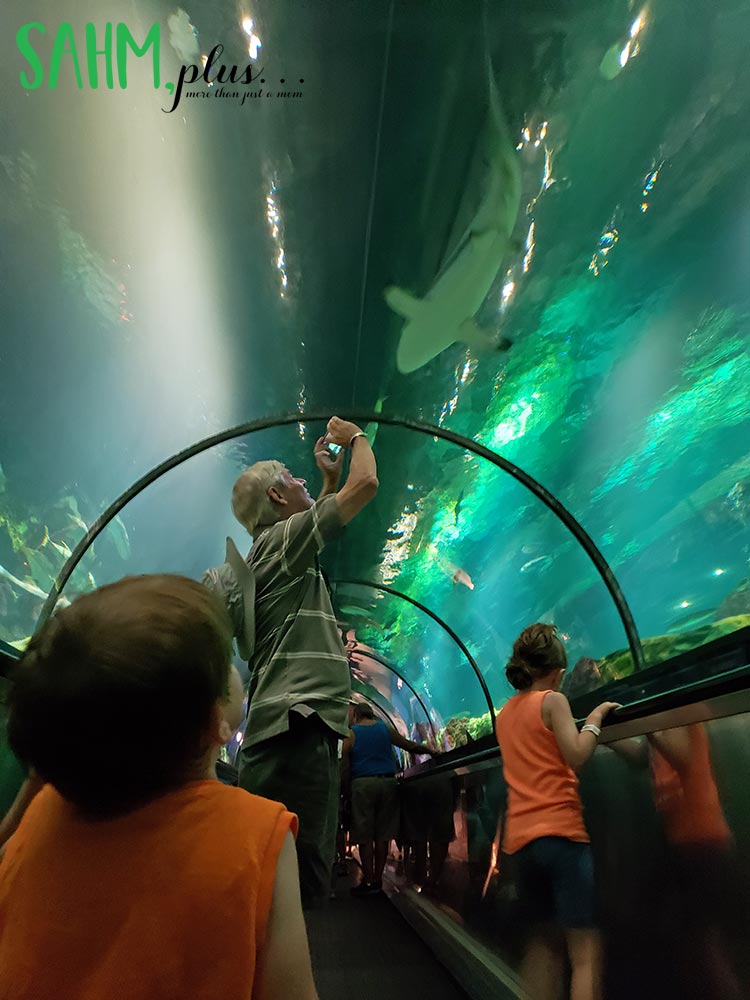 In light of the Happy Harbor closing, there seemed to be massive amounts of confusion among the staff.  On one occasion, a staff member told us that all the kids rides were closed.  After walking further, we found that wasn’t at all the case.

Additionally, I felt as though the staff is there to do their jobs and collect a paycheck.  Most aren’t happy or upbeat, which didn’t help the general mood throughout the park because it felt as if no one really cared.

At the end of the day, we ran into the fiasco with my daughter’s fish sandwich and I was given an attitude about the whole ordeal.  I tried to explain nicely that I pointed directly to my 6 year old when ordering her meal and hadn’t been told her request wasn’t an option for a kid’s meal.  Instead they argued with me and seemed as though they’d rather throw out the food that had been on the tray and let her cry.  It took requesting to see a manager to have it bypassed, but they weren’t nice about it at all.

While I admit I didn’t pay attention to the kid’s menu at that particular restaurant, I was taken back by the general attitude of the staff knowing they were going to have to throw the food in the trash if we chose to get my daughter a kid’s meal anyway. 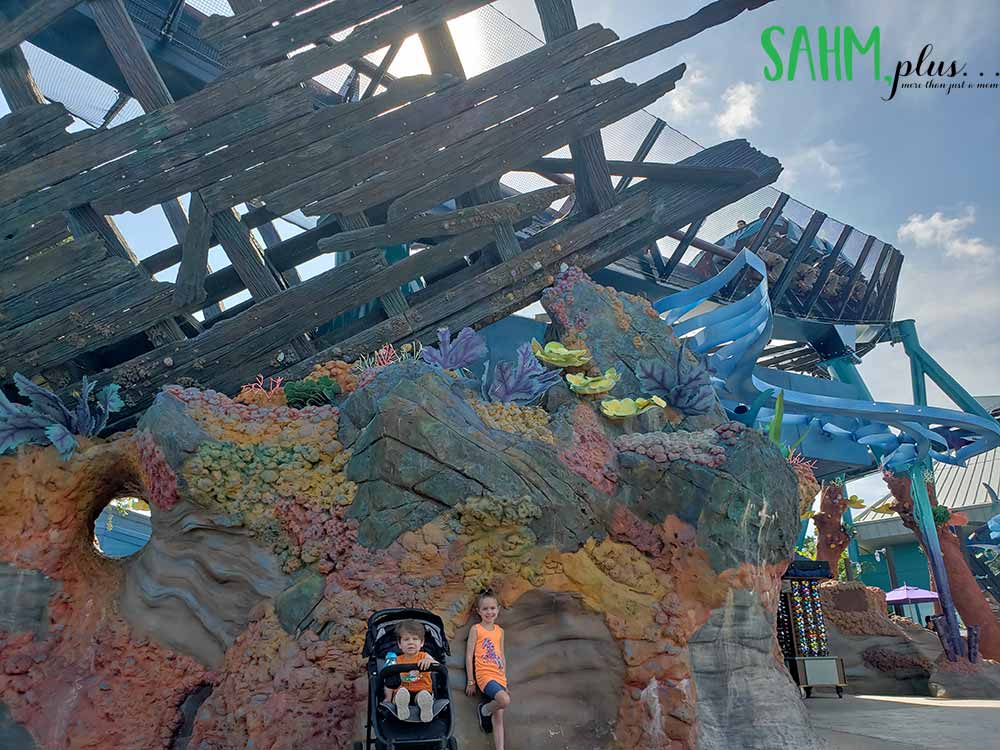 In general, the crowd was extremely low when we went during the first week of our summer break, on a weekday.  The one “big ride” we went on had no wait, aside from waiting for the staff member to open up and let us on the ride.

The kids rides that we ended up on had fairly short waits of about 15 or 20 minutes, though in toddler-time, it was an eternity.

Later in the day, we attempted to board the Empire of the Penguins, which had a 55 minute wait.  Because it was the last hour and a half of our day, we opted out and went searching for more scenic areas.  I knew my toddler son wasn’t going to handle an hour wait with any sort of composure.

Still, I’m unsure of what the wait times were like for the bigger rides, aside from the kid’s rides.  But the park, overall, wasn’t very crowded. 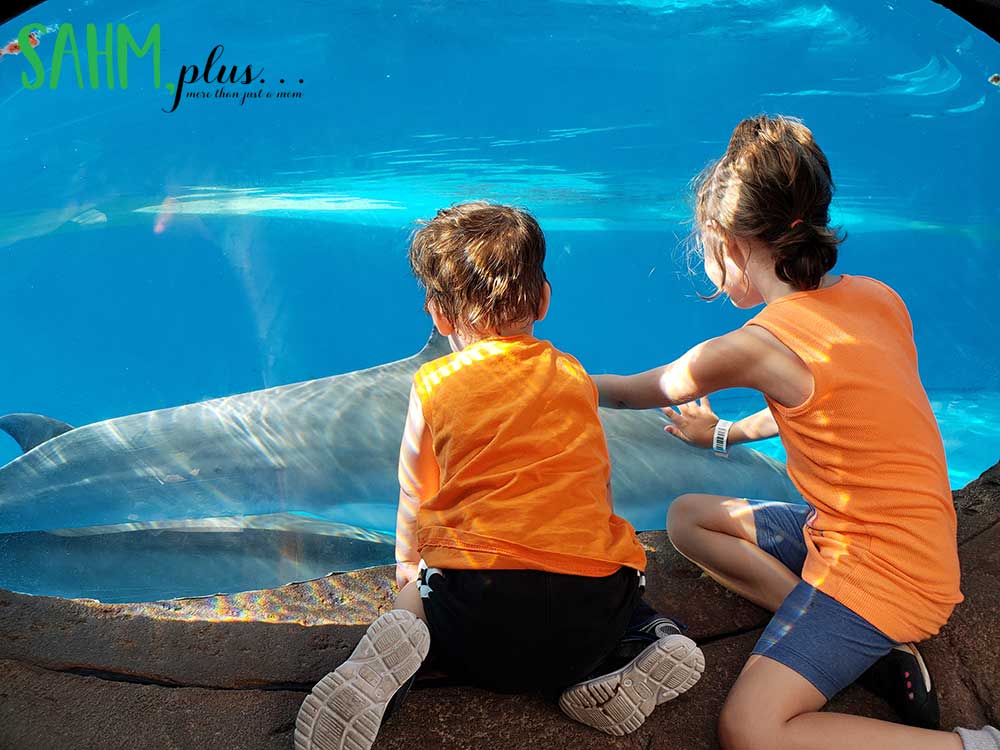 Because the kids seemed to enjoy themselves more thoroughly, it made the trip worthwhile.  I look at my pictures with some fond memories because they smiled and laughed quite a bit at SeaWorld.

If cost played into the day, at all, I personally wouldn’t consider returning to SeaWorld.  I felt as though, for the money, other parks have much more enthusiastic and helpful employees.

I also would have liked to ride more some big rides, but, that’s what I get for taking kids to SeaWorld Orlando, anyway. 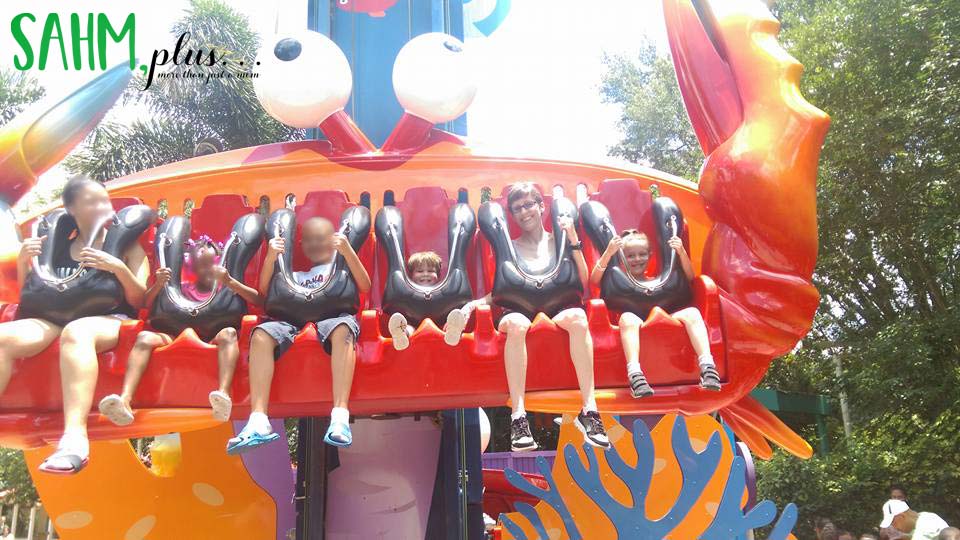 Kids Rides – There are a few for little riders

Dining Deal – You can save more money by adding the dining deal to your SeaWorld Tickets and have all day dining and certain beverages!

Not as crowded as some other parks

Chances to learn about marine life and wildlife

With the construction in Shamu’s Happy Harbor, it’s really confusing to find the little kid’s rides

Tell me: would you consider taking kids to SeaWorld Orlando? 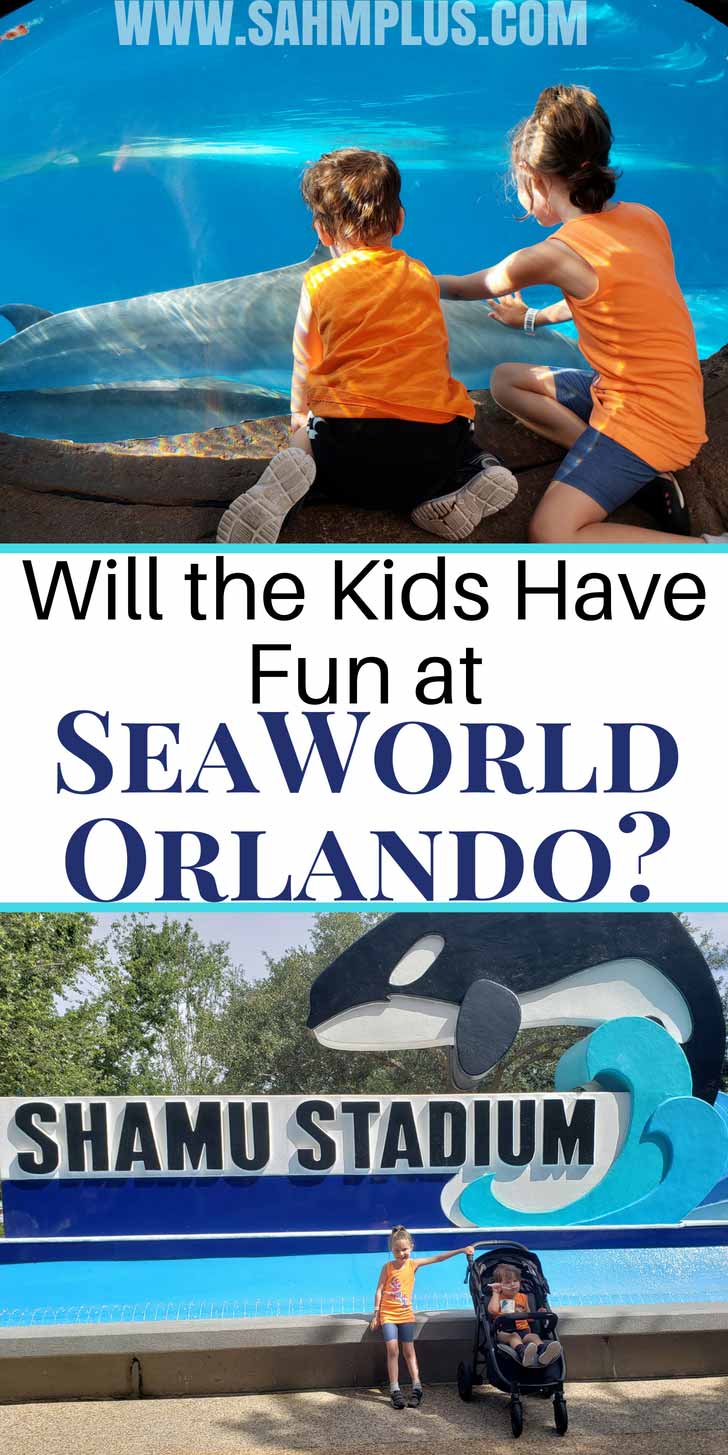 How to Make a Dry Erase Toddler Chore Chart

Why Airbnb is the Best For Family Travel

Over 30 Indoor Activities for 3 Year Olds...

How To Plan A European Trip For Your...

You Need to See These Places in Tampa...

Why Airbnb is the Best For Family Travel

9 Things You Need to Pack for Discovery...