How to Be More Careful About Offering Parenting Advice

written by Ivy B December 13, 2015
This post contains affiliate links which may earn me commissions should you click through them and take certain actions. As an Amazon Associate I earn from qualifying purchases. See full disclosure here.

I’ve spent a good deal of time considering how to write this post.  I could have posted it from so many angles.  I began a long post blasting people for criticizing my parenting.  I started, yet another, explaining the reasons we don’t need to apologize for how we raise our child.  There was a wealth of parenting advice (or judgement) thrown at me, whether I was seeking it, or not. 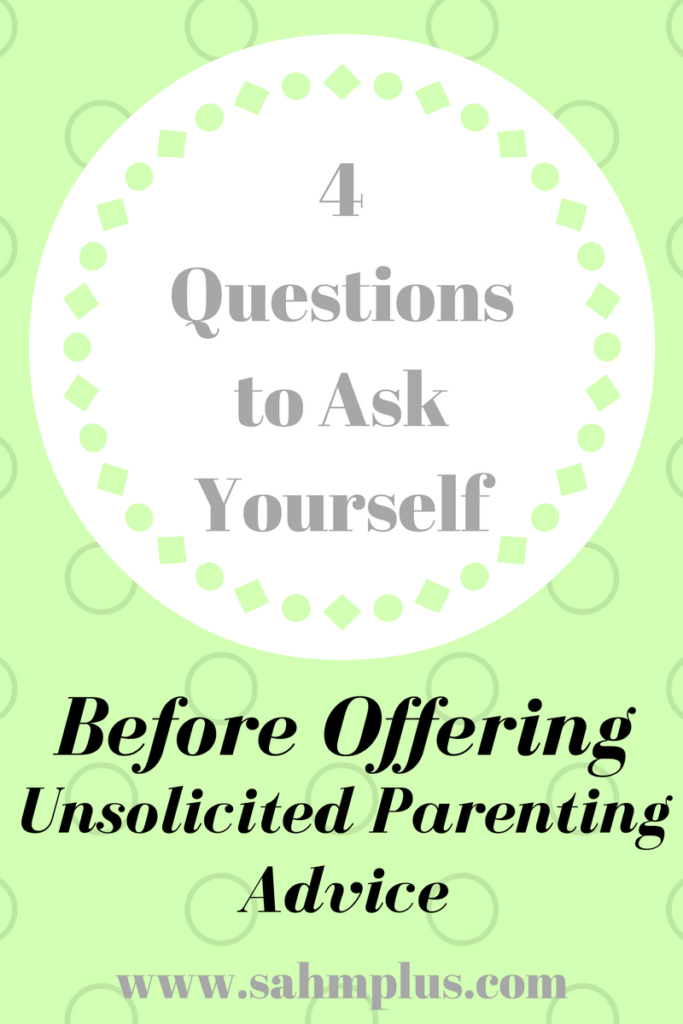 I hadn’t realized, when deciding to have children, that I was entering some sick, dog-eat-dog world of parenting.  I’ve been disturbed by some of the judgment my husband and I have received regarding the way we parent our child.  We’ve been questioned about how we handle even silly things (like “Why do you still give her a sippy cup?” when kiddo was two and we didn’t want her walking around the house spilling drinks) and have been openly called “strict” parents.  We’ve been threatened with “she’s going to feel like she can’t talk to you.”  All this from parents we believe are far too lenient and have, seemingly, no expectations of their children.  I’m even more bothered that the worst of it comes from people closest to us.


My husband and I both agree on our parenting and discipline styles, and we discuss (sometimes argue … if we’re telling the truth) when we don’t necessarily agree or wonder if we’re doing something wrong.  But, we’re happy with how our daughter is turning out and we both consider ourselves partners in raising our daughter to become a healthy, happy, confident, and productive member of society.
I really wanted to post my dissatisfaction and disgust with being judged as a parent by parents who, in my eyes, weren’t doing it right either.  That made me realize I was guilty of judging just as much as they were.  While I wasn’t coming out saying the thoughts running through my head, I was still as guilty of judging them.  I was only slightly better, in my mind, because I wasn’t giving a mother a reason to question her decisions with her kid.
So, instead, I decided to make this a learning experience and social experiment, and took the opportunity to attempt to correct the problem, one step at a time.  I began to think of all the ways I’d been just as unfair and really started to feel bad.
The first thing I had to do was to apologize to my brother-in-law for calling him out on empty threats to the kids’ inappropriate behaviors in his own home.  I originally defended my outburst with the very real excuse that my pregnancy had made me extra cranky (bitchy, if you will).  And while, I was overly irritated with the empty threats, it was no excuse for being impolite to the man in his own home.  So, I finally messaged him with an apology.
It was an awkward feeling, especially knowing it didn’t affect him, but it felt good to clear my conscience.  It felt good doing what was right instead of simply letting it go and continuing to justify my actions for whatever excuses I had.  And, it made me feel good knowing I did something I wish others would do.
[tweetthis twitter_handles=”@sahmplusblog”]4 questions to ask before offering unsolicited parenting advice[/tweetthis]

4 questions to ask yourself before sharing unsolicited parenting advice

I’m human.  I understand thoughts are going to cross our minds.  That doesn’t mean we need to speak them.  We don’t need to disrespect, or undermine, another parent’s authority.  We shouldn’t be creating doubt in the minds of mothers and fathers who are doing their best to maintain a level of sanity they can handle in their homes.

My personal opinion is that we’re all screwing up our children in our own ways, so mind your own business.  As parents, we should be supporting each other, and that’s not achieved by disrespecting, questioning, and tearing each other down.  Let’s not make the already hard job of parenting even more difficult by being against each other.  We all share a common goal, and that’s to raise our children the best way we know how … maybe we can even do so with a little sanity left. 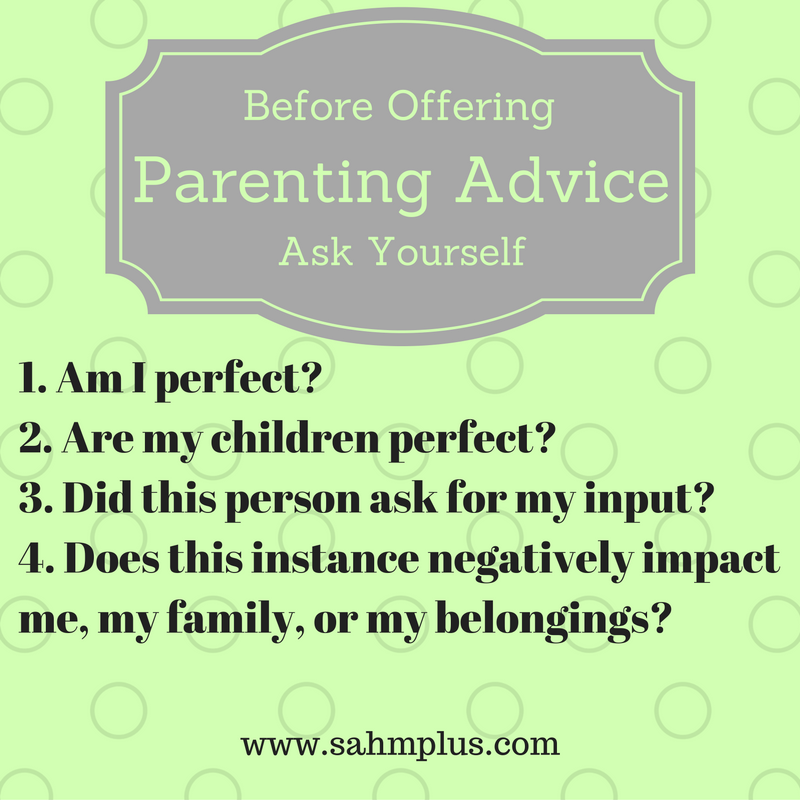 Did you slip up and question or criticize someone’s parenting?

Apologize!  I don’t care if you offer up your excuses to try to justify yourself, or tell me that you realized you criticized me for something you did similarly later on.  I can’t tell you how much it would mean to me if you’d just own up to being rude or inconsiderate.

When parenting styles are drastically different

There are some people who are raising their children very differently than we do our own.  Remembering it’s not okay to judge someone’s parenting doesn’t mean it’s okay to subject yourself or your child to inappropriate behaviors.  I’ve struggled with how to handle them and found two ways that work for our family.

1) Reduce contact and visitation with those families – less time with them means less time they have to leave a lasting negative impact on my child’s upbringing.

2) Don’t invite them into my home – destructive behaviors, poor discipline, and general lack of respect or concern for other’s belongings means you’re not invited into my home, or at least not very often.

By following these rules, I’ve saved myself quite a bit of stress.  I don’t have to worry about certain kids breaking our house rules or mistreating our belongings.  And, negative impacts can happen outside our home, where I can easily explain that different families accept different behaviors and live by different rules.

[…] How to Be More Careful About Offering Parenting Advice […]