5 Ways to Encourage Independence and Make Your Toddler Happy

written by Ivy B February 14, 2018
This post contains affiliate links which may earn me commissions should you click through them and take certain actions. As an Amazon Associate I earn from qualifying purchases. See full disclosure here.

5 simple things you can do to promote toddler independence.  At the same time, you may find yourself dealing with fewer toddler tantrums while building valuable skills.  In the world of toddler parenting,  anything that makes a toddler more peaceful is a blessing

Hi, I’m a toddler mom!  I’ve been a stay at home mom for going on 7 years now and I’m tired.  I think the words mom and tired are synonymous, right?

Well, I also have Hashimoto’s and am currently struggling with my iron stores, presently beginning to schedule iron infusion therapy.  I kinda got the short end of the stick on mom life.  Between getting older and dealing with my health issues, it’s important I encourage my children s’ independence as much as possible.  Sure, I like to be a little lazy, too, but I keep telling myself the earlier I promote independence, the easier I’ll make my life in the long run.  I promote toddler independence for this very reason.

I may also work on toddler independence because toddlers can act like little terrorists when they want to do something themselves and aren’t allowed.  My son is going through a phase where he plops himself on the floor and throws his head back.  With both of my kids, I had to deal with being hit (or kicked) or the full on tantrums if they were dead-set on doing something themselves.  So, I do my best to help them with their independence.  At the very least, I show them I want them to do things independently, even if something isn’t within their abilities at the moment. 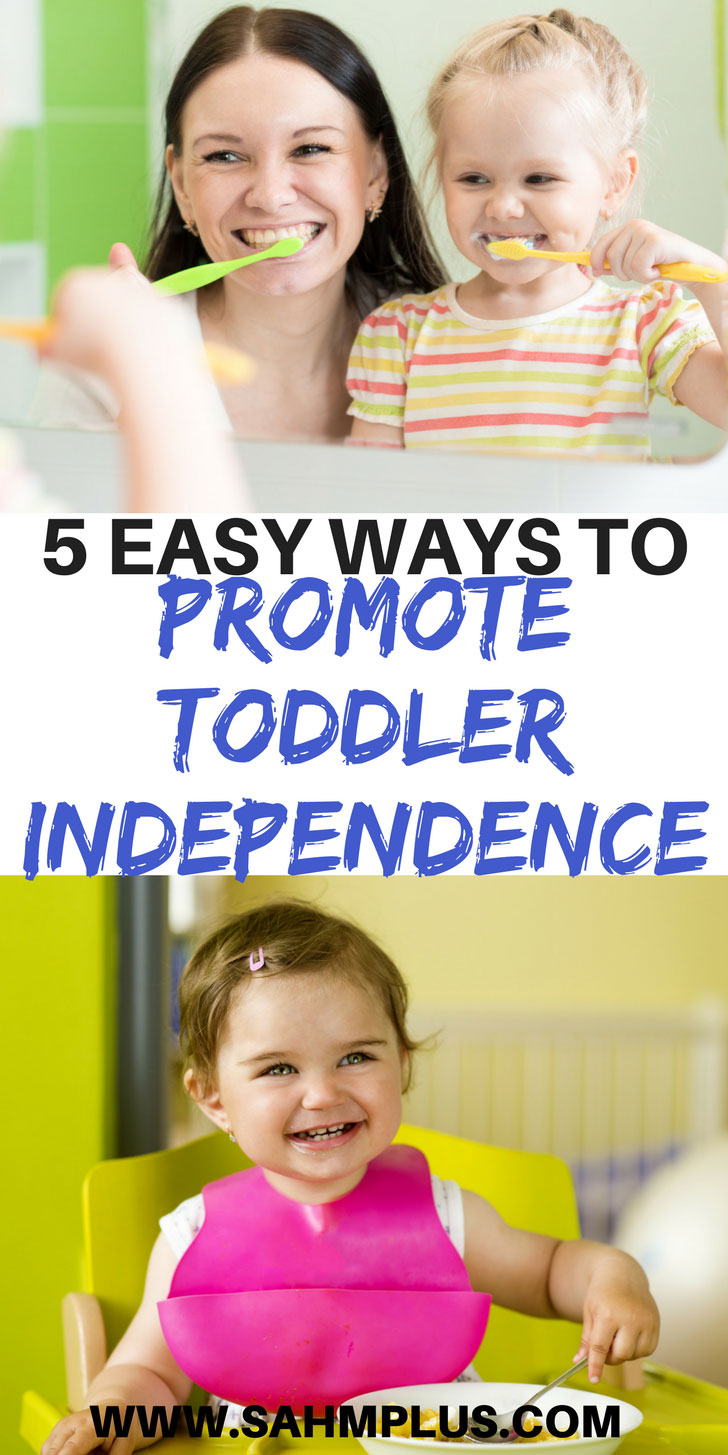 Following are 5 easy ways to promote toddler independence and help reduce toddler frustrations.  By letting go of the idea that things will be perfect, you and your tot will find a few more moments of peace.  And, you’ll be teaching him/her some valuable skills they’ll need as adults.

My favorite part about a toddler learning his independence is the pride we both experience when he is capable of doing something on his own.

Both my kids really enjoy helping mommy with chores.  I know this phase won’t last.  One day, they’ll be grouchy teenagers who’ll roll their eyes at me when I suggest they complete their chores.  For now, though, I encourage their independence by giving them age-appropriate chores.  I have a wonderful list of easy toddler chores that not only promote toddler independence, but help teach them responsibility.

Bonus: Including children in daily chores allows mom to get more done and can be a bonding activity.  Plus, you can keep track of their achievements with a DIY dry erase toddler chore chart so they can visually see how much they’re doing.

Allow them to dress or undress themselves

My son loves putting on and taking off his own socks, but he’s had trouble with the process.  For Christmas I purchased [easyazon_link keywords=”EZ Sox” cloak=”n” locale=”US” localize=”y” nw=”y” nf=”y” tag=”ivsvabasaan0a-20″]EZ Sox[/easyazon_link], which have loops to help him pull on his socks more easily.  This has reduced the frustration he’s experienced with being unable to put on socks.  Now, he’s generally able to put on and take off his own socks.  Plus, he learned to take off his jacket about the same time.  Wardrobe meltdowns are fewer now that he’s found more independence.

Bonus tip: Allow your tot to try something before offering assistance.  When you see him/her struggling, ask if he/she would like help..

When feasible, give your toddler (appropriate) choices.  In order to combat some feeding issues, I allow my toddler to choose what he wants for lunch.  This isn’t a free-for-all, however.  I usually stick to two options that I’m willing make (like turkey or grilled cheese sandwich).  I may even let him choose sides (fruit or berries).  I maintain control of a semi-healthy toddler lunch, while still giving him some independent control over what he’s willing to eat.  Unless he’s stuck in irrational toddler mode, this often means I don’t have to deal with a tantrum over having made the wrong lunch.

Bonus tip: Choices can be extended to books, outfit selection, or an activity you’re willing to do.  Giving choices reduces tantrums. 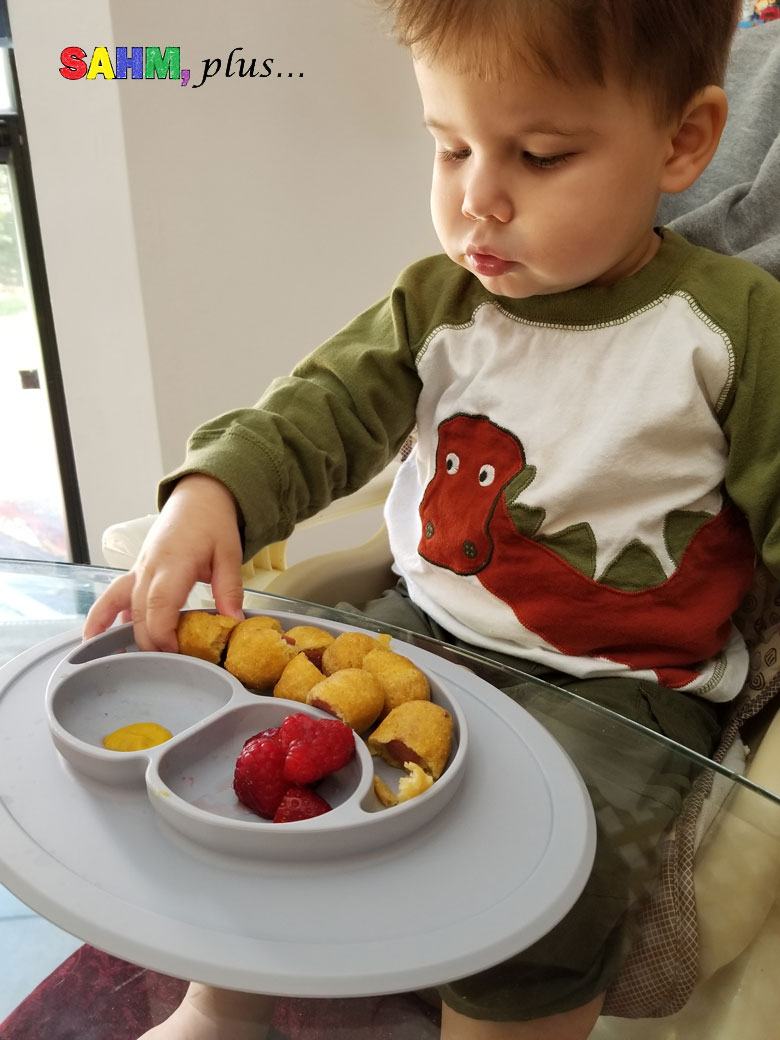 Toddler independence – self feeding with EZPZ mini mat in gray

As a mom of two kids, I understand our desire to have clean hands and faces.  But, more often than not, food struggles have risen out of my kids’ desires to feed themselves.  I’ve had to let go of the notion that we’re walking away from the table as clean as we came to it.  If your child expresses an interest in self-feeding, let them do so in whatever way they’re comfortable.  Encourage the use of utensils, but if your toddler wants to pick up food by hand, don’t fight them.  You don’t want to further promote any reason for your child to become a picky eater.

Bonus tip: Offer food cut in cute shapes using a FunBites food cutter to make food easier to pick up.  Serve on an EZPZ mat which may help food stay on a plate instead of on the table. 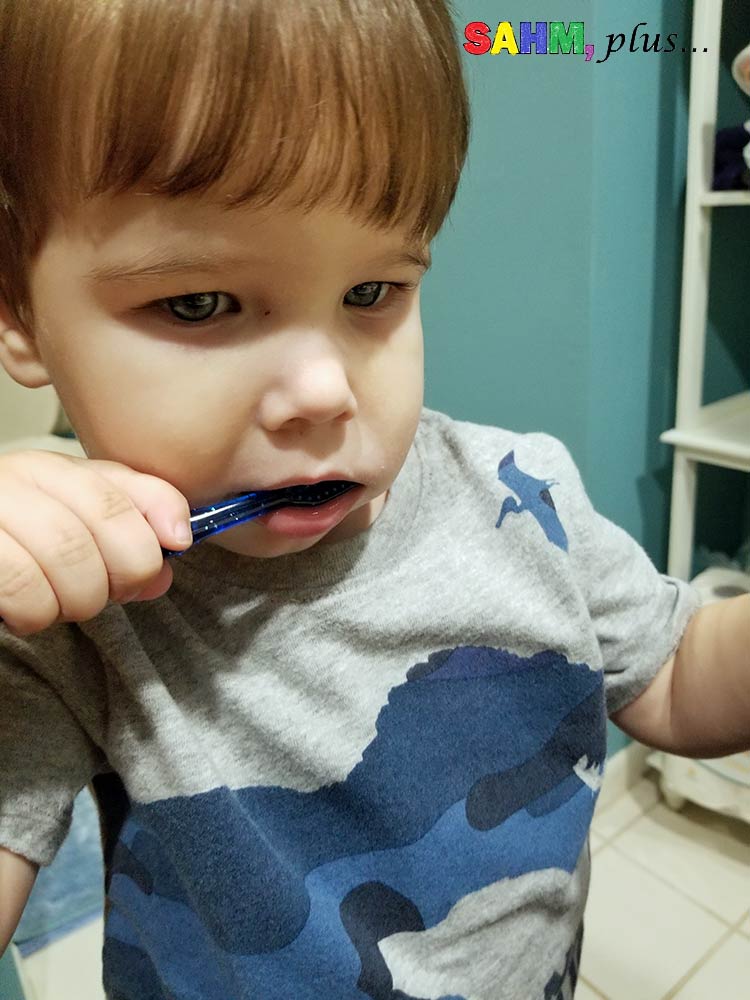 I don’t know about your kids, but both of mine have loved washing their hands and brushing their teeth.  Encourage your toddler’s independence when they express an interest in any personal health activity.  Make sure your children are exposed to your own personal hygiene routines so they know this is a grown up activity they need to do.

Bonus tip: Have a step stool in the room(s) they’ll be brushing their teeth and washing hands the most.

What are some of your favorite ways to encourage your toddler’s independence?

How to Prepare for a Disney Cruise with Toddlers

LOVE the picture of him loading the laundry!! I am sure it seems super fun to him now. (Good news: They eventually go to college and have to do their own laundry whether they want to or not 😉 ) You have some great suggestions in your post.

He loves put laundry in and taking it out of the dryer 😀 I hope he stays that way, but judging by my six year old, probably won’t be so lucky lol

Great post! I love the tips – and I’m in a similiar boat – my little is going through a phase where she reeaally wants to help mama.

Letting her dress herself takes forever and I’m so impatient, but this is a great reminder to suck it up and let her have her independence….even if it’s hard on me.

Fabulous ideas! My 2 1/2 yo opens yogurt and cheese sticks and can do so many things I never thought of letting my first child do at that age! It’s amazing the things they learn when they are neglected – I mean given the opportunity! : )

Great ideas! Offering choices is a big one for us, and I definitely take advantage of having them “help” with chores while they still want to!

yes! My 7 year old still “wants” to because she earns money to buy stuff.