How My Breastfeeding Success Makes Me Feel Guilty

written by Ivy B October 24, 2016
This post contains affiliate links which may earn me commissions should you click through them and take certain actions. As an Amazon Associate I earn from qualifying purchases. See full disclosure here. 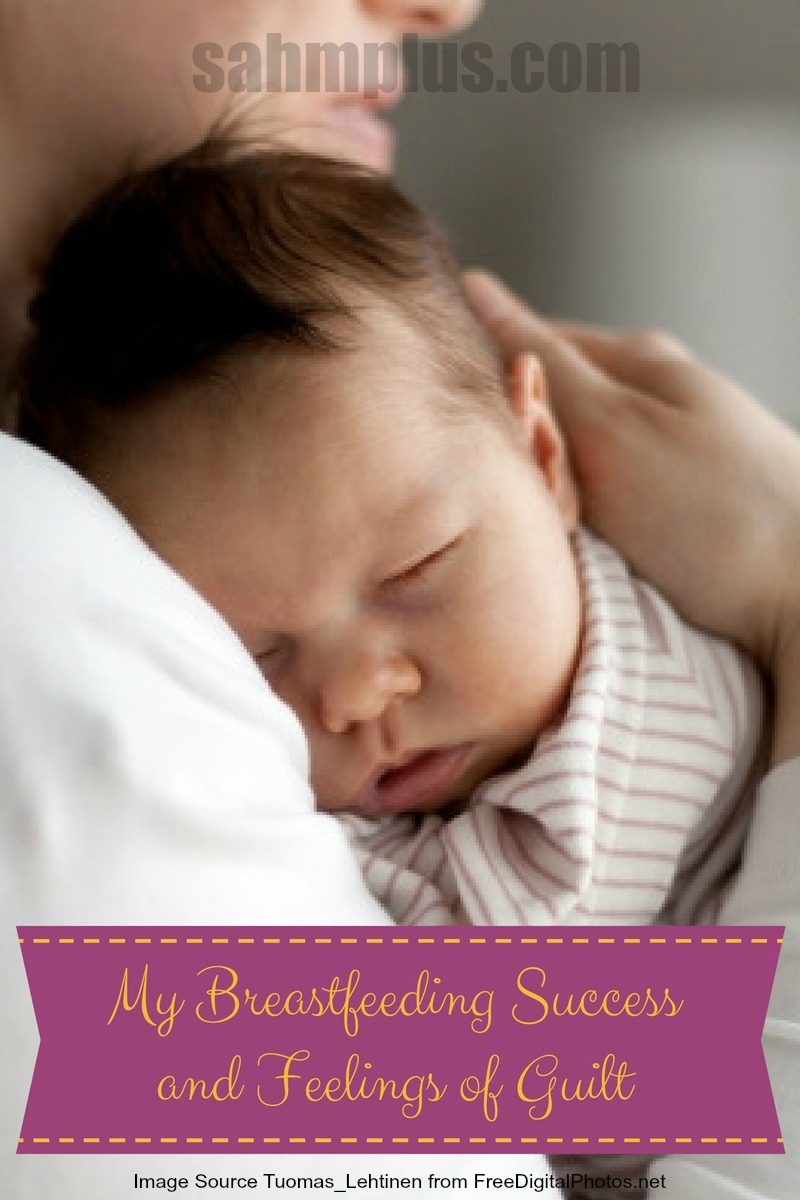 I’m nearly 11 months into breastfeeding.  I spent a good deal of my 2nd pregnancy on the fence about breastfeeding.  When I was pregnant with my first, there was no doubt in my mind that it was the right choice.  Yet, when she was born, we went through absolute hell.  The thought of breastfeeding, since, was terrifying.  I was truly afraid of breastfeeding again and had seriously considered heading straight to the baby aisle at the store for formula.

My son was born 13 days past his due date.  At the end of the pregnancy, I was faced with a few extra decisions, but I was still on the fence about breastfeeding.  In the end, I decided I’d give him the opportunity, but secretly hoped he wouldn’t take to it.  The moment he was placed on my chest, he latched.  There was no turning back, whether I liked it or not.  So, 11 months into this gig, I’d say we’ve experienced breastfeeding success.

We’ve overcome a few hurdles.  Many of them have been my own doing.  We had one run-in with thrush which was quickly remedied and never returned.  The others were completely due to my mental state.  I was looking for any reason to throw in the towel on breastfeeding.  The newborn stage was rough.  He would, literally, nurse for an hour or longer, give me about an hour break, and then we were back to it for another hour.

I wanted to quit when …

My nipples were raw.

I couldn’t get anything done.

Then, something amazing happened.  Several months in, I began to not hate breastfeeding.

But, with our new found breastfeeding success, I also began to having feelings of remorse.

I realized I was experiencing a bond with my son that I had longed for with my daughter.  Our breastfeeding story seemed doomed from the beginning.  She didn’t want to latch at the hospital.  And, the rest of the breastfeeding story was riddled with pain, food intolerances, and eventual transition to formula by about the time she was 7 or 8 months.  We never could get it right.  And, we never had any moments during her breastfeeding time that I felt things were going right.

It felt as though any moment I wasn’t nursing her, I was pumping.  There’s a chance I pumped more than I ever needed to because I thought I was going back to work.  But, when that didn’t happen, I was on auto-pilot.  I had an ever-growing stash of breastmilk in the freezer and completely hated breastfeeding sessions.  I felt like my baby hated me.  And, not that I really did, but I felt like I hated her at times.

So, here I am.  I get to sit with my son in peace.  I get to stare at his beautiful blue eyes.  He plays with my face or pulls my hair.  We find ways to laugh during nursing sessions.  Or, he finds ways to continue being a wiggle worm.  He even began downright refusing bottles or cups because he prefers the real thing.  Things just feel right.  And some days, I regret that I never had that with my daughter.

Our breastfeeding success story makes me feel like I love my son more than my daughter.  I know I don’t, really.  But it sure feels good that things are easier and I feel capable.  We have a good routine.  I’m comfortable nursing almost anywhere.  And, I’m making my son happy.

I never ever felt that way nursing my daughter.  And, I wonder if our poor breastfeeding relationship negatively affected us for good.  So, I have moments that I’m ecstatic I overcame obstacles and successfully breastfed my second baby.  Then, I have moments I experience pangs of regret over that bond I never got to have with my daughter.  It hardly seems fair.

Other posts you may enjoy

10 tips to get baby to sleep

Spread the love
Was this article helpful?
YesNo
Follow my blog with Bloglovin
7 comments

We found out our son had food allergies when he was 3 months old, so I had to change my diet. No milk and no nuts. That was a huge change for me as a native New Yorker who loves cheese and pizza.
But in the end, we made it almost two years with nursing. He loved it. I was a heckuva lot slimmer then, than I am now.
I think boys are more voracious nursers because that man-love for boobs-thing starts early.

Oy … I had to change my diet after I realized I had a dairy & gluten intolerance. Getting rid of dairy was the worst! I loved all things cheese. I think that contributed to my daughter’s problems and because I no longer eat that stuff, I have no idea if my son has those problems yet.
And yes, he definitely had the boob-love starting early. I just left him for 2 days and I think he was traumatized by being boobless LMAO.

It’s not unusual to have different experiences with different babies. My son had all sorts of latch on issues, nipple confusions, and he generally didn’t want to waste time on eating. (He’s still like that– when he isn’t having a growth spurt and eating us out of house and home.) My daughter, who has all sorts of food allergies, was a perfect nurser. She never had issues latching on and always wanted to nurse as a baby. It wasn’t until she was weaned that all her allergies started popping up. I had a love hate relationship with nursing but if we have another, there is no doubt in my mind that I would choose to nurse again.

I definitely have a love hate relationship with nursing. Thankfully, I don’t have to worry about doing this again 🙂 I can quit while I’m ahead LOL.
Thanks for sharing your story!!

Nursing can be such a challenge and delight at the same time. When we found out my daughter had a gluten and egg sensitivity I had to make some major diet changes. It was quite the hurdle to jump over but she is still nursing at 20 months. When I do have another munchkin I plan to nurse again. We will see how it goes and face the challenges as they come. I really appreciate your honesty regarding your breastfeeding journey.

Stopping by from Family Fun Friday. Thanks for sharing your story. I had a terrible time trying to breastfeed my son, mostly because I had supply issues . I really beat myself up about giving the baby formula. We are about to start trying for a second baby and I often wonder if I should even bother trying to exclusively breastfeed. I think I will try but will not stress out as much if I can’t.

Hi Melissa,
Thank you so much for stopping by and sharing your story.
At times, I still wish I hadn’t tried again, but I do think that’s part of the secret to our success this time around … I didn’t have my heart set on something so I was never nervous about it not going as planned. Definitely don’t stress it… in the end, you’re taking care of your baby, and that’s all that matters.
I wish you luck 🙂

[…] had my own trouble with breastfeeding.  My breastfeeding success made me feel guilty – after being successful with my son, it hurt that I, in my mind, failed my […]