The Last Day of Winter Break

written by Ivy B January 6, 2017
This post contains affiliate links which may earn me commissions should you click through them and take certain actions. As an Amazon Associate I earn from qualifying purchases. See full disclosure here.

How often is it that I share updates about my family?  Like, personal ones?  I don’t feel like I’ve given you the opportunity to really get to know us.  Thankfully, I’ve joined the Ultimate Blog Challenge and I am supposed to blog every day for the month of January.  This gives me the motivation to get more out to you and a chance to fill you in on things that I didn’t have planned.  So, today is a more personal post.  I’m actually kind of excited to not be sharing knowledge, rather, giving you a glimpse into our world.

Adventure on the last day of Winter Break

It was Wednesday, and the last day of Winter Break.  I would be sending S back to school on Thursday, so I’d made a plan, over the weekend, to visit the Jacksonville Zoo.  The very last day of her break was supposed to be cool and sunny, perfect for an outdoor adventure.

For the duration of her break, if we weren’t doing holiday events with various parts of the family, we were cooped up at home.  Cooped up by choice.  My husband was busy working around the house or on the vehicles, as he was on vacation as well.  I admire his hard work, but if he’s not going out with us, I generally don’t choose to take both children out alone.  They’re both a bit difficult.  Baby B is quite a handful and is about as demanding as S can be.  Unfortunately, because he’s not talking yet, he cries and screams a lot.  S, at least, can eventually be calmed enough to understand what her problem is.

Anyway, I decided I would take the predicted beautiful day, and pack my kids up to enjoy a day out at the Zoo.  And, I was going to do it alone, because my husband had returned to work.

The morning started out questionable as S began to make funny faces.  I could see she was trying to keep herself from crying, which usually means the uncontrollable tears were in the works.  Trying to keep us on track for the day, I quickly asked if there was a problem.  Fighting back tears, she told me something was wrong with her pants … something about falling down.  I needed to act fast.

“Go up to your room and find pants that fit, and then come back down so we can go to the zoo.”

I didn’t give her enough time to process anything further.  We didn’t have the time if we were going to leave before B started fussing for a nap.  Getting him in the car before being cranky was essential in making it there at all.  S quickly changed and, surprisingly, came back down as though nothing ever bothered her. 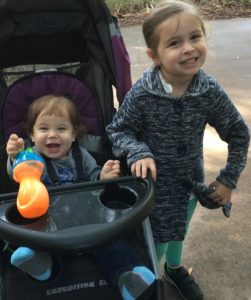 Beautiful day at the zoo

Aside from being able to score a Pumpkin Spice Latte at Starbucks, our morning went almost as planned.  We left a little later than I’d anticipated and had a bit of a mishap getting onto the highway, which took us on a bit of a detour.

Though we got there later than planned, the rest of the day was perfect.  There was no line to wait in for renewing our membership and there weren’t as many people as I’d expected either.

My children were on their best behavior.  Even my son was content sitting in the stroller sucking his thumb and twirling his hair as he watched the animals, and laughed at his big sister on occasion.  Missing his nap, which is usually a big deal, barely phased him.  He even made it all the way through lunch before he began to fuss.

My usually demanding and needy daughter tried to argue with me once.  I’m sure the use of our consequence and reward jars was part of her good behavior.  But, I could tell she genuinely was out to please.

I wasn’t stressed out and I didn’t want to rush home and put the kids in their rooms!  The cooler weather wasn’t exhausting me.  And by lunch time, between coffee and Dr. Pepper, I was so over-caffeinated that I was beginning to get jittery.  I was feeling even more energetic than the unusually active animals.

The animals!  I haven’t ever seen the animals at this zoo all so spry and active.  Florida’s heat usually has all the animals (and myself) so drained and lifeless, reserving their energy for the short walk they need for food.  But, on this particular day, it was as though we weren’t even in Florida. 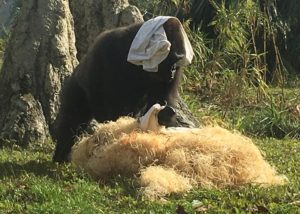 Reflecting on our day

When I told my husband about the day, the only way I could explain just how good, was to express that I was certain I hadn’t brought our kids with me.  I was sure I had gotten lucky and swapped my usually crabby and cantankerous kids out with some well-mannered, polite, and fun kids I’d never met before.

I went to bed that night, not completely drained, feeling like I’d made the right decision to take them out.  Maybe I could conquer the world with two kids in tow?!  But, I’m grateful at least one has returned to school for now, before I actually tried to pull off and fail at another day like that! 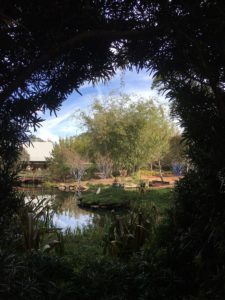 back to school
Follow my blog with Bloglovin
7 comments

So glad your zoo day went great!! That is awesome! Maybe the good days will now be happening more often than the challenging. 🙂

I could only hope. I don’t produce easy kids though LOL.
Thanks for stopping by.

Thanks for the more personal post Ivy. That was awesome. One of my favorite things to do when my kids were young was going on a field trip. Going to the zoo or the aquarium were some of my favorite trips. The boys loved it and so did I. Thanks for sharing about your day!

My pleasure! I’m glad I had a great day to post about!
I miss the adventures I would take my daughter on before there was our second … I used to take her to all kinds of places. Just not as feasible with her in school and another cranky baby LOL.
Thanks so much for stopping by 🙂

I often feel like that with my kids. I can only laugh when someone compliments how well behaved they when we’re out in public. Because at home, they totally press Mummy’s buttons! The zoo trip sounds awesome!

Usually mine are pressing my buttons everywhere. There’s no safe place for mommy LOL. Thanks for visiting 🙂

i think there are always days like this for all of us where we wonder, but just like you, i enjoy and cherish them – glad you had a wonderful day at the zoo.. and wishing for many more such days