written by Ivy B December 5, 2020
This post contains affiliate links which may earn me commissions should you click through them and take certain actions. As an Amazon Associate I earn from qualifying purchases. See full disclosure here.

There’s nothing I like more than an easy craft for kids.  NOTHING.  Well, maybe Starbucks Lattes or a really good hamburger with fries.  Seriously, I have a weakness for hamburgers and fries!

But, we’re not talking about my unhealthy habits, are we?

No.  See, we’re talking about easy crafts for kids.  Because

Dang … maybe I’m not good at this mom thing.  Nah, I totally rock motherhood in my own ways, you know.

Still, my daughter loves crafts.  Art and science seem to be her two things.  She’s capable of and enjoys tons of stuff, but those two things really seem to get her excited.  So, you know, I feel kind of guilty that I don’t do much with her!

A couple of years ago, I wanted to help her do a craft, but I didn’t want to spend a ton of time on it.  And, a huge mess was out of the question.  I adapted this “easy Rudolph craft” from an old book I purchased at the library book sale called Christmas Crafts: A Holiday Craft Book by Judith Hoffman Corwin. 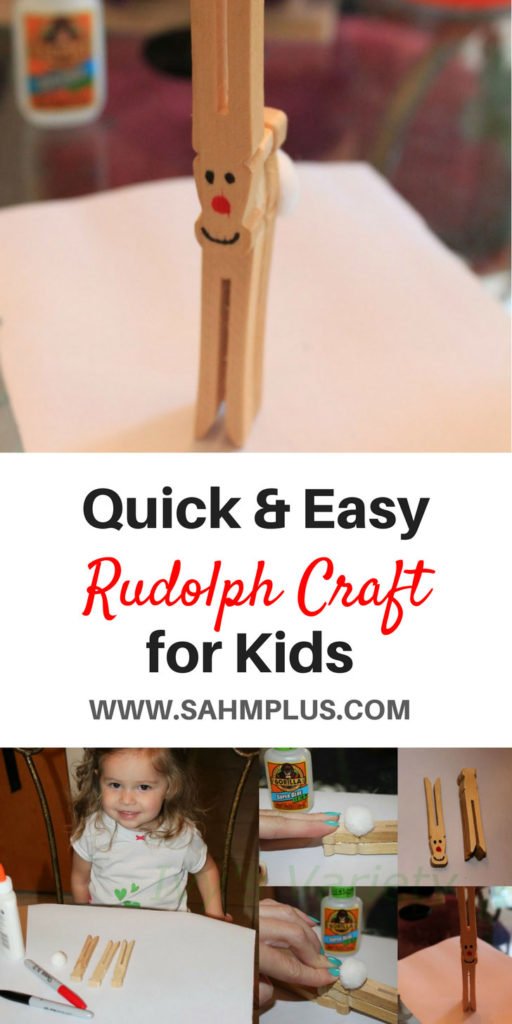 Let’s just say, it wasn’t as easy as it claimed to be until I got wise about the glue. 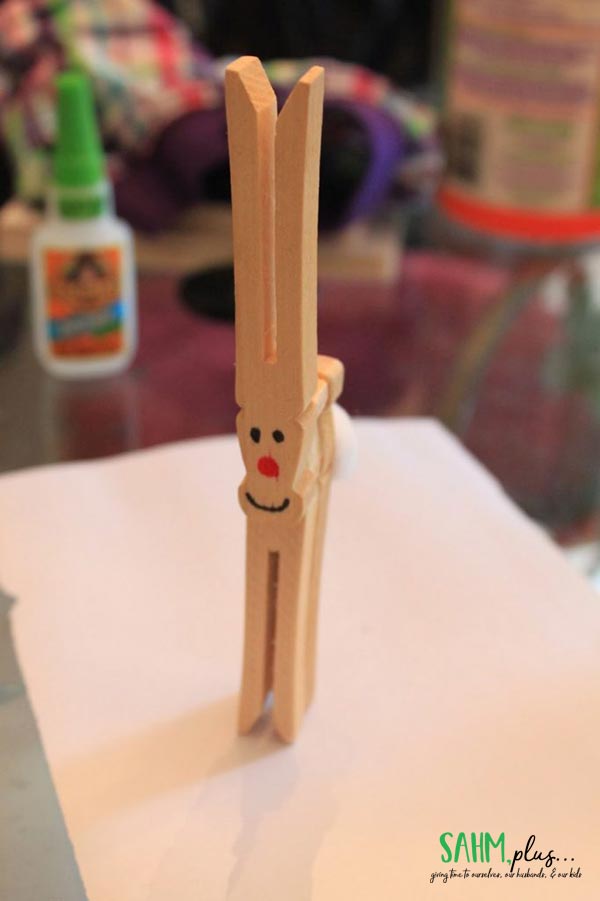 Supplies for an Easy Rudolph Craft

How to Make this Easy Rudolph Craft for Kids

Okay, I promise this is an easy Rudolph craft for kids if you heed my warning about the glue.  Learn from my mistakes, people!

The book wasn’t clear on what kind of glue to use, so I tried AND FAILED at two gluing sessions.

If you don’t want your child to lose interest in this craft (and you don’t feel like cussing out Rudolph), do yourself a favor and use a trusted super glue and be done with it.  I tried two different kinds of glue to no avail.  My kid walked away and I was furious with Rudolph.  That said, gluing becomes your job unless you want your kid’s fingers glued to themselves or the table.

My adaptations were: Sharpies for drawing the face, a small white pom pom instead of a cotton ball for the tail, and Gorilla Glue Super Glue.

Turn one of the clothespins with the “legs” of the clothespin upward like antlers, then draw on Rudolph’s smiling face with his sweet red nose. The other two can be glued together legs down to

The other two clothespins can be glued together legs down to make the body.

Rudolph’s head will be glued to his body and then tail to the back of the body. 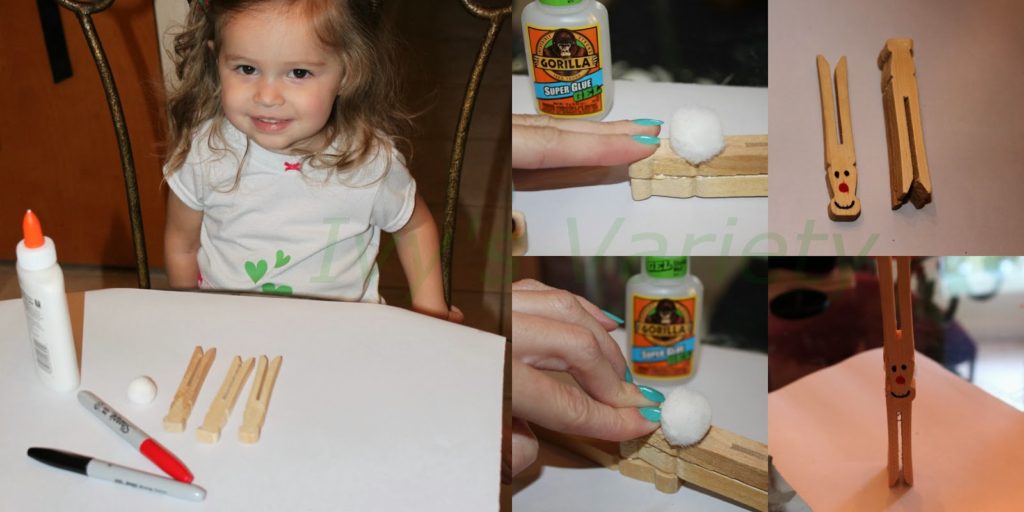 Be sure to allow for plenty of drying time if you’re using super glue!  Enjoy your reindeer.

Now, if you want the rest of the reindeer for Santa’s sleigh, repeat the process except don’t draw more red noses.

Spread the love
Was this article helpful?
YesNo
Christmas
Follow my blog with Bloglovin
3 comments

What Are The Best Meal Planning Apps For Families?

Fantastic Watermelon Activities Your Kids Will Want to...

A Custom Baby Gift for Teacher Going on...

How to Make a Dry Erase Activity Book...

How to Build Artistic Interests in Toddlers with...

How to Have a Felt Christmas Wonderland Everyone...

12 Wonderful Watermelon Activities for Your Preschooler

This looks easy enough to do, plus not too messy either. Love it and trying with my girls this week for sure as they have a few half days and days off too. Thanks for sharing 🙂

This craft is adorable! My kids are too big to do stuff like this with me anymore, but my little 4-month old nephew will be ready to make a mess in a couple years 🙂 I better pin it for later!

That is so, stinking’, cute!!! I did a Rudolph craft last year with about 25 5 year olds. And it was fun, but this one probably would have been waaay better. I’ll have to try this one next time for sure!

[…] Quick and Easy Rudolph Craft Your Kids Will Really Love via SAHM, plus… […]