What I Want My Kids to Know About Healthy Competition

written by Ivy B February 2, 2015
This post contains affiliate links which may earn me commissions should you click through them and take certain actions. As an Amazon Associate I earn from qualifying purchases. See full disclosure here.

In our house, our childhood lessons will not be that “everyone wins.”  Why I won’t teach my kids there are no winners and losers.

My husband relayed an article to me about a girl’s basketball coach who was suspended temporarily after his team ran up the score.  On the way home from a doctor’s appointment the other day, my daughter began to whine that she didn’t win her game on the iPad.  Twice, as a matter of fact, she responded equally disappointed that she didn’t win.  I explained to her that it was okay that she didn’t win and that it just meant she had to try harder next time.  She happily set off trying again.

After those words, I began to think about the kids these days who are being taught to play sports in gym without a ball.  Or where teams aren’t expected to win, but to just have fun.

Since then, she’s gone on to join a soccer team.  Until now, I’d never had reason to think too hard about the concept of not keeping score.  But in her video game play upset, I’m pretty sure I conveyed a message I believe ALL children should learn.  Real life doesn’t adhere to “there are no winners or losers.”

My thoughts are that healthy competition teaches one:

1) You don’t get participation trophies in adult life.
2) Losing simply means trying again and striving to do better. 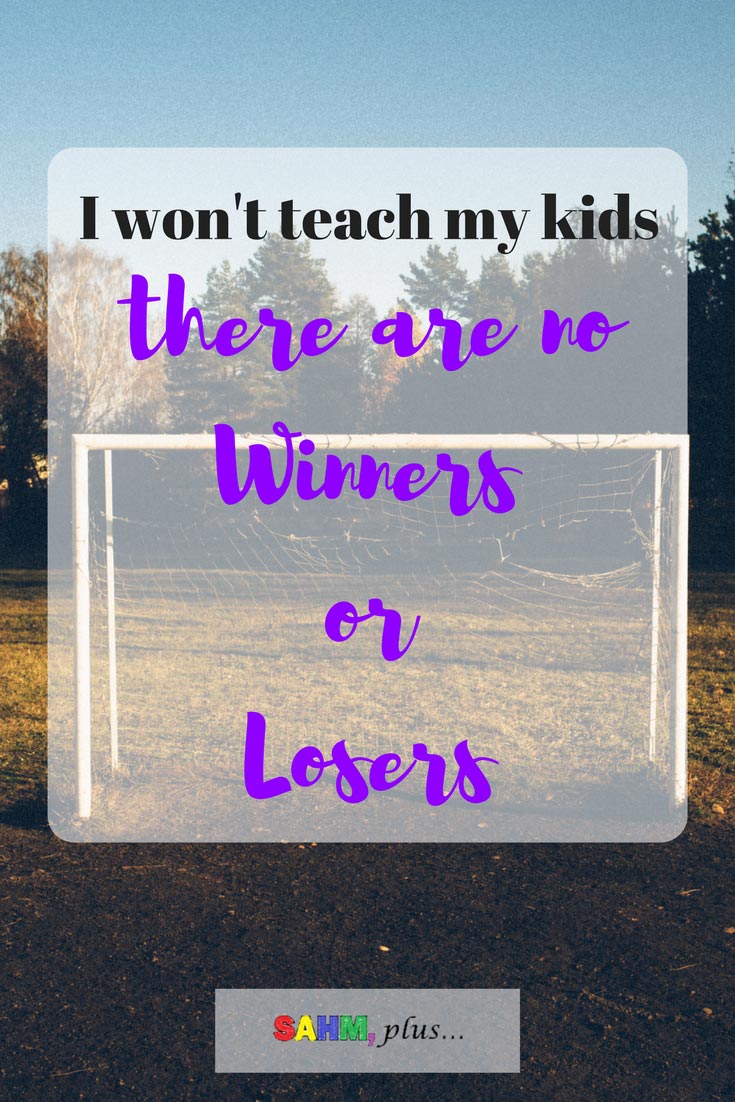 What I couldn’t convey, based on her playing a single player game, is that sometimes someone is better than you at something.  It’s okay, because you’re likely better than them at something.  That’s life and that is what makes us individuals.  We all have different strengths and weaknesses.  As adults, we need to know that there ARE winners and losers.

I hadn’t realized, when signing her up for Upward Soccer, some of the rules that went directly against our views as parents.  Not only are there no winners and losers, they don’t keep score (at least in the younger years).  They pass out participation stickers.  And, if one team is controlling the ball more than the other, they swap sides and kindly give the other team the ball.

For my daughter’s general lack of athletic ability, I can see a benefit in this.  Being her first season in a team sport (any sport), this is the perfect way to introduce her to soccer.  But, I feel, at the same time, the lack of real competition stifles her understanding of the game.

When she kicks a goal, she’s unbelievably excited that she scored.  In order to follow the current rules, I struggle to find the words to express that her team doesn’t keep score.  We just have to remind her that she’s doing well and that she’s participating in a team sport to learn how to work together.

But, I want her to also learn early, that other teams won’t give the ball to the weaker team when they realize they’re dominating the field.  If she chooses to play again another season, we’ll be seeking out a team that focuses on healthy competition.  Where stronger teams are rewarded for their abilities and weaker teams are encouraged to try harder.  It doesn’t mean they suck, they just need to practice more!

Related: How to Teach Your Child Not to Be a Sore Loser

Why Your Kids Need to Learn There Are Winners and Losers

If we continue teaching our children that it’s not important to play games or compete to the best of our abilities, they’re going to be at a disadvantage when they enter the real world as adults.  Leaving high school, they’re likely to be competing for spots in their choice universities, places in sought after internships, and for employment.  If your child is hoping to become a professional sports player, I’m pretty sure that they aren’t going to get hired if all they’ve ever done was just play, instead of striving to be better.

Everyone doesn’t win and you’d better be playing your A game when you’re after something you want.  If your child loses, make it a lesson in practicing and trying to be more competitive, rather than whining about getting their butts handed to them and trying to have the other player(s) punished for doing well.

I think the only time it’s acceptable to whine about losing is if a player/team is winning via some unethical method(s).

No one is simply handed a win … we earn them through hard work, dedication, and practice.  We have to prove ourselves worthy of jobs, promotions, raises, and sometimes that may come with a bit of competition.  We need to take losing as a means to improve upon ourselves, not bringing someone else down for doing better than us.  I believe training our children to think this way early in life will prevent them from the heartache of learning such lessons when they need to understand reality the most.  I mean, what good is having the expectation that everyone is on the same level and believing that we don’t have to work to get the things we want?  I also tend to believe that those who believe  there are no winners or losers also are the problematic people who believe everything in life should be handed to them.  No one is simple entitled to anything.

It’s your turn … how do you feel about teaching your children about winners and losers?

What you should teach your children about the president and elections

How to raise a good leader you can be proud of

Book Review: The Life-Changing Magic of Tidying Up by Marie Kondo