No, I didn’t create a mama’s boy by practicing babywearing!  It was the answer to a very high-need born mama’s boy.

I wear my son almost everywhere.  Recently I was asked by another mom “Don’t you think you’re making him a mama’s boy wearing him all the time?”   My response was, and still is, a very enthusiastic “Oh no.  He came into this world a mama’s boy.”  I hadn’t realized at the time, just how annoyed I was by this question.  But, the more I replayed it in my head, the more I realized how judgmental this question was.  Whether or not she meant it negatively, the simple question had the power to make any mama question what they’re doing.  Luckily, I’m not easily swayed by other people’s opinions.  I know what I’m doing is right for my family and asking me that question hadn’t made me think any less of my babywearing.

By babywearing, I hadn’t created a mama’s boy.  When my son was born, he immediately latched onto me.  He was a breastfed baby by instinct.  And, he only wanted his mama.  Truth be told, his dependence on me created a necessity for me to wear him.  In his first few weeks of life, the only way we could make it through the days with naps and some semblance of sanity was to wear him in a Moby Wrap.  I had to cook, clean, and walk him around everywhere.

When he got a little bigger, we switched to a soft-structured carrier.  I still had to carry him while cooking, cleaning, and to get him to settle down for naps. 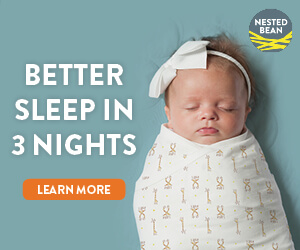 Mama was the only capable person

My son spent the first few months screaming if he wasn’t being held.  He acted as though no one on the planet was capable of caring for him, but his mom.  My husband couldn’t hold him without my son screaming.  And, he made it really hard on everyone else who tried to hold him.

My son was a high-needs baby!  This was apparent as soon as he arrived Earth-side.

He wasn’t happy in his car seat.  He hated being set down on his play mat.  And he screamed in his swing.  On occasion I could set him in his Mama Roo with the noise really loud, but he was only content for about 2 minutes before needing me again.  When I desperately needed some peace, I popped him into a carrer knowing he would pass out almost immediately.  We began “lovingly” calling the Boba our STFU carrier.

Babywearing truly was a necessity.  It was our coping mechanism.  Without it, if you want to know the truth, I’m not certain I would have made it through the second super-fussy baby without anti-anxiety medications.

Check out these posts

10 tips for getting baby to sleep

How infant-friendly is Disney’s Magic Kingdom?