When I originally read the synopsis of The Sunlight Pilgrims by Jenni Fagan, I was under the impression that it was set much further in the future. This was not the author’s fault; it clearly says 2020. My brain just happens to believe that I still live in 2007. Maybe I’m secretly hoping they bring back low-rise jeans and velour tracksuits. 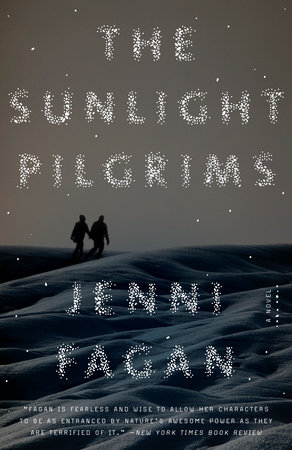 Disclaimer: Although I received this book free from Blogging For Books, all opinions stated here are my own.

Books that take place in a specific year that aren’t in the past, the distant future, or part of a weird alternate reality, irritate me. At some point, the actual year of the reader is going to surpass the fictional year of the story. I call this the Back to the Future effect. It’s difficult to suspend disbelief when you’re too busy pouting that you don’t have a hoverboard yet. People in 2020 are going to read this book and (hopefully) say, “Gee, it’s pretty warm for an ice age.”

Let’s talk about that ice age, anyway. Fagan’s tale takes place in BFE, Scotland. Clachan Fells, to be exact. Temperatures are dropping at an alarming rate and there’s an iceberg coming. At least, that’s what Fagan wants you to believe this story is about. It’s what is advertised on the back of the book, after all. The real story is about 12-year-old Stella, though, a transgender girl. And THAT narrative is amazing. I wish Fagan hadn’t felt the need to wrap Stella’s story in something more palatable for conventional audiences.

“They asked if she might feel different in a few months, or if perhaps she would simply change for gym in the janitor’s cupboard. She said she’d felt like this her whole life and no amount of praying was going to change it and she could use the janitor’s cupboard to change, but she was a person, not a broom.” – Jenni Fagan

My other issue with The Sunlight Pilgrims is that it’s not a full story. It’s a slice of a story. It’s the valley between two big mountains – the significant events that happened before you, the reader, were dropped in, and the major events you anticipate are about to happen. As a result, I never felt like I truly got to know the characters.

What do you think of this review?

Did you enjoy the book review of The Sunlight Pilgrims?

Want to buy the book?

Disclaimer: We are a participant in the Amazon Services LLC Associates Program, an affiliate advertising program designed to provide a means for us to earn fees by linking to Amazon.com and affiliated sites.

The Sunlight Pilgrims: A Novel