You and Your Hubby Will Love These Low Key Anniversary Ideas

written by Ivy B October 22, 2018
This post contains affiliate links which may earn me commissions should you click through them and take certain actions. As an Amazon Associate I earn from qualifying purchases. See full disclosure here.

Apparently, our low-key anniversary was surprising to many.  I’m sharing a few low key anniversary ideas after spending a delightful weekend with my husband reminiscing our 9th year of marriage!

Last month, my husband and I celebrated our 9 year wedding anniversary!

I shipped the kids off to one of the grandparent’s houses so he and I could spend the weekend together, just enjoying each other’s company.  Sadly, we didn’t really have any solid anniversary plans, but I wasn’t letting that stop me from spending some quality time with him.

Maybe I was a little disappointed that, for the 2nd year in a row, something got in the way of either planning for or actually being able to spend our anniversary together.  Despite that, this year’s anniversary turned out better than I had hoped.  The best part was, it was low-key and still very special to me.

So, I thought I’d share what we did, and hopefully give you some low-key ideas for anniversary celebration, too! 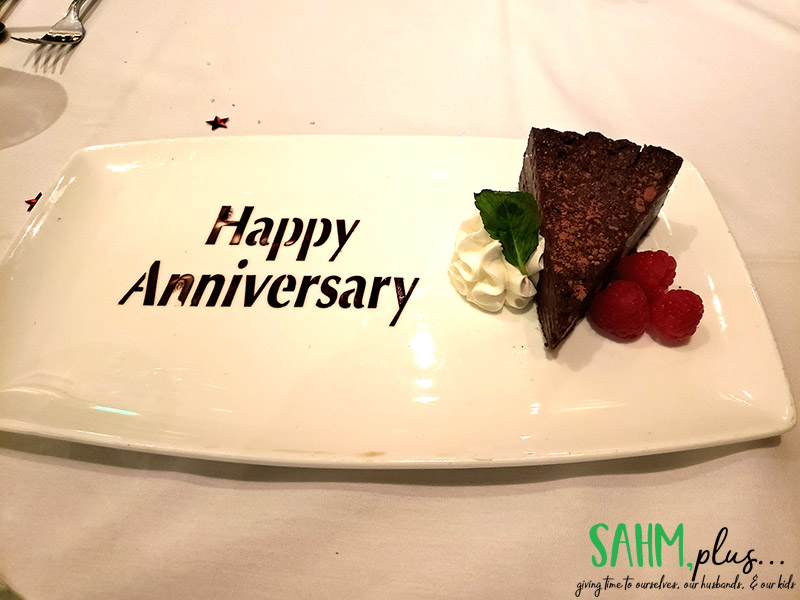 The kids were off to their Grandfather’s house on a Friday afternoon, but hubby and I were both pretty tired at the end of the day, so we decided to go have an easy dinner close to home so we could come back and veg out on the couch.  I’d thought good and hard for ideas for anniversary celebration that wouldn’t be extravagant or expensive.  Yet, I didn’t want to spend 2 hours in a movie theater not able to really focus on my husband.

Saturday, we decided, we’d spend the day celebrating, but we still hadn’t had solid plans.  I simply decided I wanted to go skating and hubby was pretty happy with the suggestion.

So, we started our Saturday celebration acting like we were on a cheap date like kids again.  We began with a cheap lunch at Chic-Fil-A, then moved on to the skating rink. 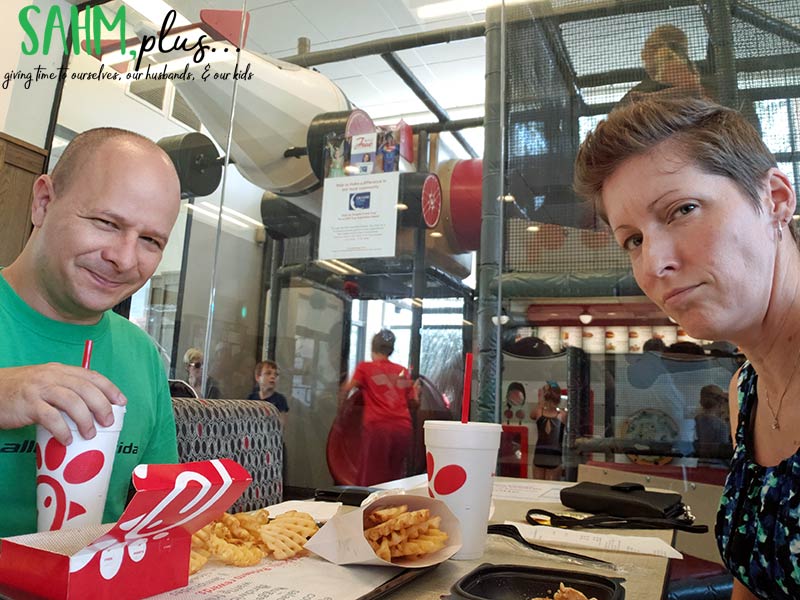 Boy, did we have a good time!  Hubby said one of his favorite activity years ago was rollerblading and he hopped into new rollerblades as though he’d never missed a day.

I, on the other hand, laced up old-school skates and wiggled out onto the rink with little confidence.  Still, I did pretty well for a while until my ankles started getting tired … and I busted my butt when I lost focus on what I was doing. 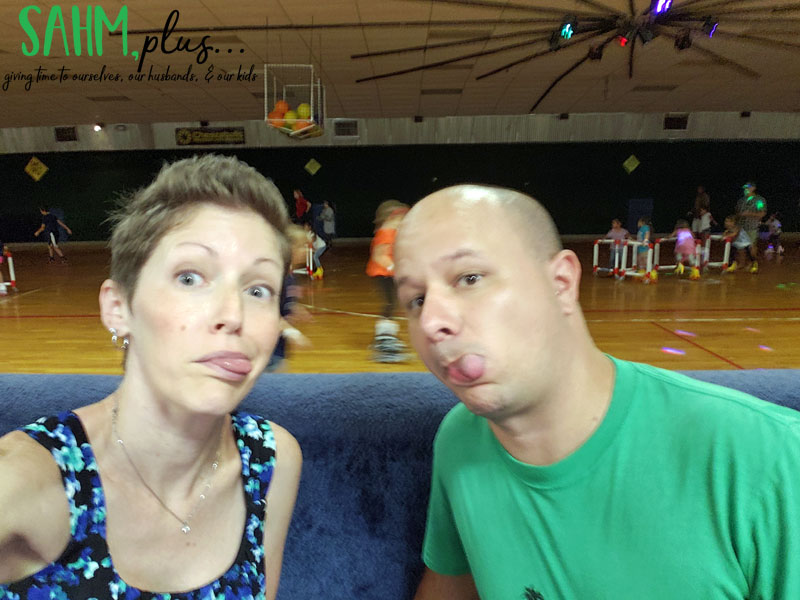 Our afternoon date was way more enjoyable than I had expected because we were genuinely just enjoying being together doing something fun!

What a way to spend an anniversary … being reminded that we’re not so old that we can’t still go out and have a good time!  And I totally made hubby happy, which made me happy.

Afterward, we went home to rest up before switching gears to have a fancy dinner at Capital Grille.

Taking a photo of a photo never really works out right.

For the evening portion of our anniversary date, we feigned more maturity, dressing up in nicer clothes and (trying to) act our age.

Later, we headed over to a local cupcake shop that sells Gluten Free and Vegan cupcakes, in addition to regular cupcakes, again simply enjoying being together.

Initially we were thinking of staying at an all-inclusive resort, but now we’re trying to plan a trip to Europe.  (As a side note – any European travel tips you have would be really helpful!)

Now that you’re parents, you probably don’t get to spend much time in the mornings chilling out, right?  I know we don’t!

So, a quiet breakfast, when you likely have the most energy, can be a wonderful experience.  It’s great for catching up on thoughts, starting to make plans, or just reconnecting.

2. Do a Fun Activity Together. 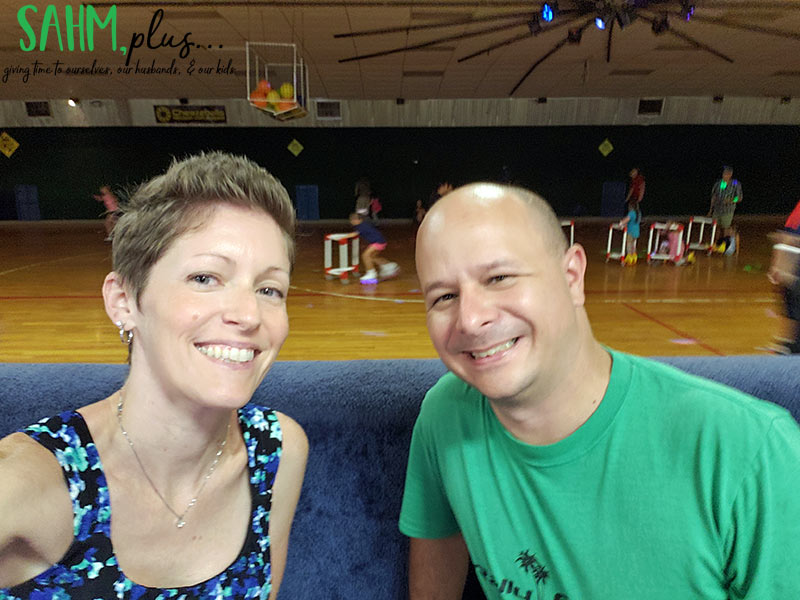 This, of course, was before I busted my butt

Pick an activity in the area that you two can enjoy together.  Choose to do something one of you loves and the other will try or something you both are interested in but have never tried.  Either way, think outside the box.

Take a page out of our book and do something that reminds you of being a kid again like skating or bowling.

This is a great idea if you’re on a budget, but still want to spend quality time together.  Having a picnic in the backyard or at a quiet park would be a great way to relax and spend time together. 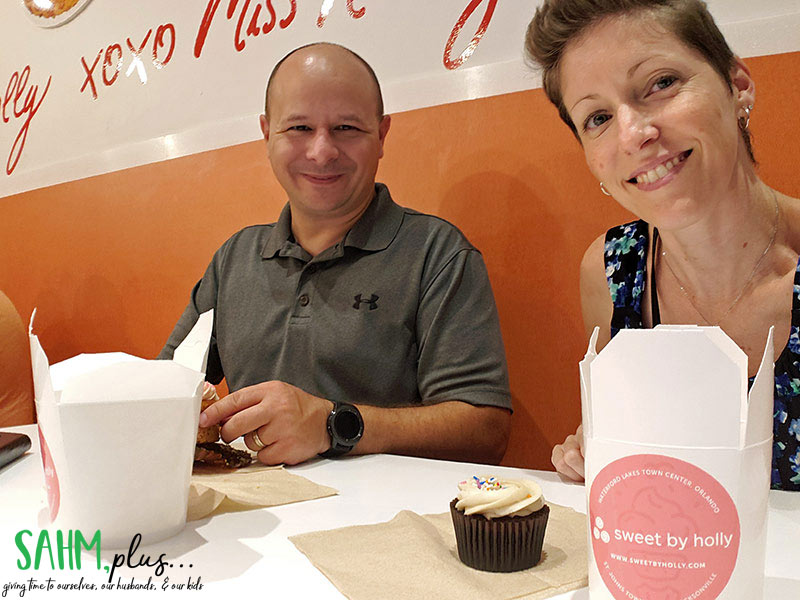 Not only can this be budget friendly, it’s a sweet way to spend an anniversary evening very low-key.  Just celebrate by sharing a dessert and reminiscing over the last few years.

6. Have a Movie Marathon at Home.

If you can get rid of the kids for an evening (or weekend) and just want to relax, consider this a great way to spend time cuddling your spouse while getting to unwind.

Whether you’re visiting some local sites or shopping the mall, take a walk together.  Don’t forget to hold hands and act like you’re dating again … you know, back when things were easy and all you wanted to do was be next to each other!

These were just some low-key ideas for anniversary celebration.  Ultimately, whatever you decide to do to celebrate your anniversary should be about spending some quality time with your spouse.  Don’t put pressure on yourself or your spouse to “make it special” … sometimes just doing what you love and being with who you love makes it special with less effort!

Pin me for later

Want to refer back to these low-key ideas for anniversary celebration? Save it for later! 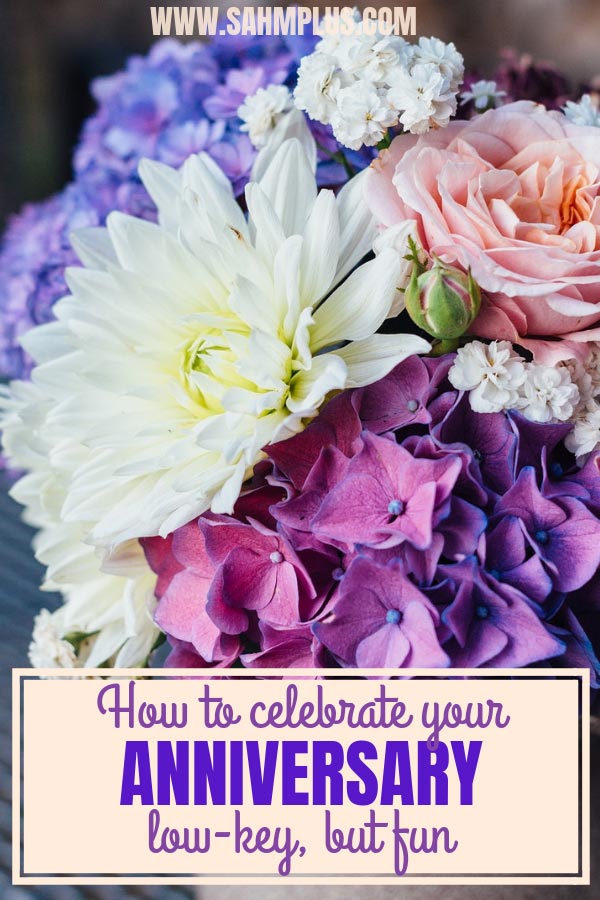 Being a Stay at Home Mom is My Job

What Is A Healthy Marriage?

Why Marriage Is Important

Keep Marriage Exciting (Even After Kids)

Destroy Your Marriage After Baby in 7 Easy...

Can You Have a Happy Marriage With Kids?

The Benefit of Putting My Husband First

30+ Flirty Memes For Him

When Love In Marriage Changes Over Time

You Need These Marriage Boosters, Even If Your...

THIS sounded like an awesome anniversary date! I love that you two decided to eat close by so you two can both veg out on the couch…WE LOVE DOING THAT! There are so many times where we are just like, “can we just live recklessly for the weekend…and that will be our date?!” and by recklessly, we mean vegging on the couch and sleeping in and taking multiple naps…not on a baby schedule! haha Happy Anniversary you two!

saving this to show my husband – tomorrow is our anniversary but he left today for 5 weeks ahead of us for our big move to texas, so its the first anniversary we wont be spending together

My husband and I almost immediately started having kids after we started dating (or at least it feels that way) so we have hardly ever celebrated our anniversaries. I love this lowkey idea! We have definitely done the quick drive thru celebration and I honestly love it

What great ideas. Spending time together is the key right. It doesn’t have to be fancy.

Hi!
This is so sweet and heartfelt. Thank you for sharing this “low-key anniversary tips” cause I felt love even in little things. Truly, spending time with our loved one is already a great way to celebrate an important occasion. All the love!