I Fed My Daughter m&ms for Dinner: I Just Wanted My Toddler to Eat

written by Ivy B October 15, 2013
This post contains affiliate links which may earn me commissions should you click through them and take certain actions. As an Amazon Associate I earn from qualifying purchases. See full disclosure here.

So, a few years ago, when S was two, we fed her m&ms for dinner.  Am I freaking serious?  Well, yeah … kinda.  You can reserve your criticism until after you read the entire post – I know the whole speech about childhood diabetes, making my kid a picky eater, blah blah blah, BUT as I state often … “do what you have to do”.  I just wanted my toddler to eat! 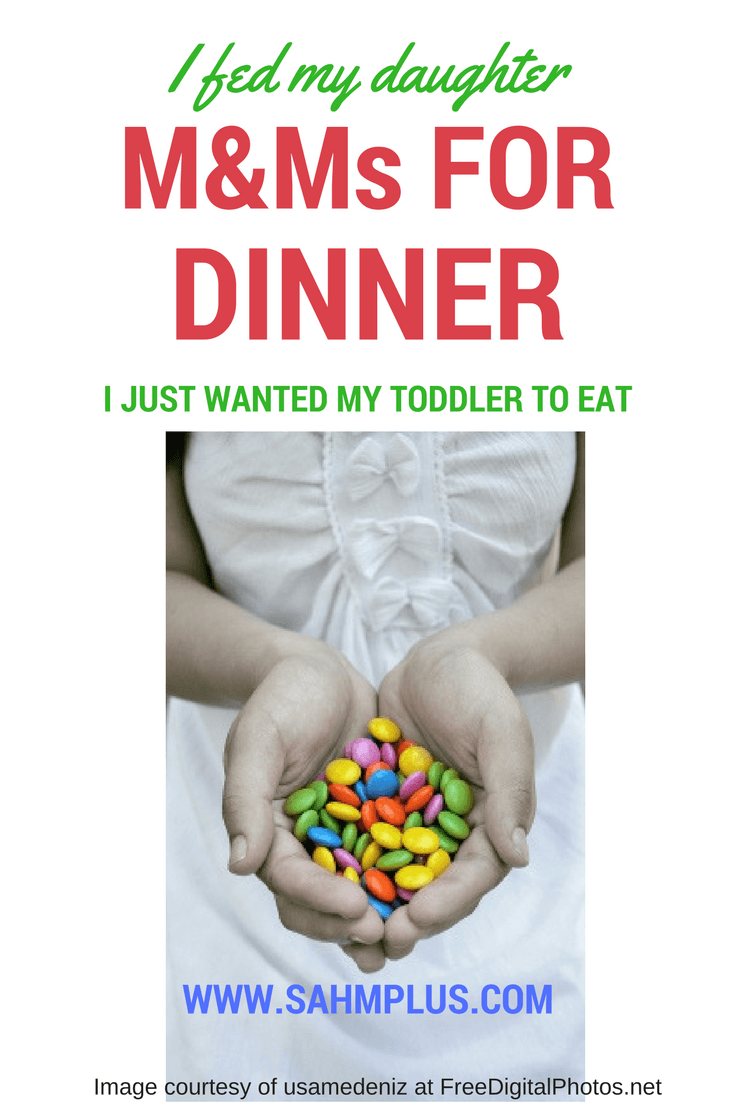 For the longest time, S was an amazing eater, but she started to become less interested in food sometime after she turned two.  One thing led to another and then she just wasn’t a good eater.  At least, not like she used to be.

We had good and bad days.  There were more than her fair share of nights she went to bed without dinner because she didn’t want to eat what I cooked.  And, I’m a firm believer in not spending more time in the kitchen being a short order cook. Besides, what was the point if I couldn’t be sure she’d eat anyway.  Nope … no time for that shit.

We became tired of the constant struggle to get our already tiny tot to eat.  It pained me that she would go to bed without dinner.  Many times I tried to remind myself that she’d eat when she was hungry.  Sometimes it helped ease my mind, other times, not so much.

What do you do when your toddler won’t eat?

One night, my husband really wanted her to eat so he offered her 1 m&m for every real bite of food she ate.  I say real because she quickly tried the whole “take a bite and spit it out” routine.  Then there was the “take the tiniest bite known to man” and hope that passes as a bite.  Anyway, she ate a good amount of food that night (though chose not to eat her carrots even if it meant no m&m).

The next night, she ate dinner without a single fuss and it didn’t even require bribing her with m&ms.  Of course, to reward her for eating so well, we gave her a mini-bag anyway.

For some time thereafter, we had random nights we had to trade bite for bite.  Other nights worked so well we didn’t even have to remind her of the rewards for eating well.  She just did what she was supposed to.

In the end, we definitely had to do what worked.  While I didn’t want to get my kid hooked on candy, it turned out to be a great trade-off for getting my kid hooked on eating a real meal.  I’m happy to report that after that phase, she became the great eater she had been previously.  At 5, she has very mature taste buds and eats just about everything we give her.  She’s adventurous and rarely turns her nose up at food before trying it.  She won’t eat sweet potatoes or boxed macaroni and cheese.  But, she is eating cooked carrots.

When was the last time you had to do something you didn’t want to for the sake of a desirable end result?

[…] weren’t full of convincing someone to eat dinner so they could have dessert. And eating M&Ms for dinner was acceptable. 10) If I wanted something for me, I just got it.  Now I think “… but I […]

[…] quesadillas, and peanut butter sandwiches are his things.  We’ve even had to resort to feeding my toddler M&Ms at dinner just to get him to eat.  There’s a method to the madness, I […]