written by Ivy B July 10, 2013
This post contains affiliate links which may earn me commissions should you click through them and take certain actions. As an Amazon Associate I earn from qualifying purchases. See full disclosure here.

As you probably have seen (if you’ve been following for any period of time), I’ve been teaching my daughter to sign since she was about 5 months old – she was about 6 months old when she started signing for milk (many thanks to her instructor for recognizing it and getting me to notice).  Baby girl is going on two and still prefers sign language over talking.  She can say words, she’s just more inclined to “do” rather than “say”.

My mother has always been super supportive of me teaching Shelby to sign and many times has thanked me for teaching her as it was the only way they could understand her when she stays with them.  On the other hand, my Mother-In-Law recently asked me if it was time for us to stop signing yet (she doesn’t understand sign language, so it’s frustrating to her).

My response is still a big, fat NO.  I realize people believe Shelby doesn’t speak because she gets her way when she signs.  Certainly I’ve been judged because of it.  I’ve been made to feel badly as though I’ve held her back with speech because I rank her sign language higher.

The truth of the matter is, trying to force Shelby to actually TALK leads to meltdowns.  I know because I have tried.  We’ve been in the kitchen with her signing and I have acted as though I don’t have a clue and I’ve brought her to tears and she’s screamed uncontrollably.  That’s a point I shouldn’t be bringing her to.
Even when I don’t focus on sign language and spend weeks at a time just using words, she continues to use sign language.  I’ve spoken to her doctor expressing my concern about her delayed speech (and she was evaluated after she turned one) – who am I kidding, it’s not my concern, but everyone else is concerned and that makes me feel compelled to think something is wrong with my child (even though I know there isn’t).
So, why aren’t we stopping sign language?  Her pediatrician doesn’t believe there’s any cause for concern… he’s seen on numerous occasions that she’s understood things well above her age range.  I have seen her sign language blossom even on things she and I don’t use regularly or consistently … in fact, she saw one of her signing videos one time that I hadn’t seen and was using a sign for quite a while that I couldn’t figure out until I happened to watch the same video once. (Note to self – always watch what the kid watches so you’re not confused later!).  Further, I believe that if we can continue to build on our sign language, she’ll have a great lead on communicating with others. 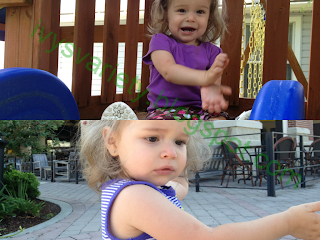 What it all comes down to for us is that she’s a smart cookie who has always been more inclined toward physical abilities than with working on speech (never was the cooing babbling babies I’ve always seen).  I’ve been seeing a slow emergence in using her voice as she becomes more confident… she called me momma about 2 weeks ago for the first time to my face and wouldn’t do it again until my dad taught her to say momma in more of a tune than speaking it. It’s just the way things are 🙂

I truly believe that when it’s all said and done we’re going to love that our daughter talks AND signs!  I’m love it so much that I’m hoping to take some extra classes in the future and perhaps teach other babies and children to sign too!!

If you’re interested in signing along with your baby/toddler, I highly recommend Baby Signing Time and Signing Time!!

On cranky-tot not napping and taking advice

Work At Home and Home School

Mindfulness For Kids: The Simple Solution To Teach...

1 Month With The Preschool Box: The Easy...

I don't think she is developmentally delayed at all! She clearly understands what words mean if she can sign them. She just might be more of a visual learner

We taught my twin grandsons to sign and it was so awesome. Few of us remember those signs 🙁 They stopped signing really early. But we read where signing actually develops areas in the brain that children who don't sign don't receive. Your daughter will be bi-lingual! Signing is greatly needed! Instead of trying to teach her to talk, purchase some toddler songs and sing to her or sing while you work. Soon she will be singing right along. Make it fun and goofy. 🙂 oh, and my son's kids weren't taught to sign. So they made their own signs up!

Diane – she most certainly is a visual learner. She picks up things from a TV or the iPad that we don't necessarily discuss.
Loretta – research does suggest there are many intellectual benefits for signing at a young age. It is my hope that she can continue with me. It's great that I get to learn with her too 🙂

I taught my youngest signing when he was a baby, and it sure saved alot of frustration on everyone's part. How smart your daughter is to have picked it up so easily! She will use another form of communication when she's ready. Everyone's time line is different.

[…] Get kiddos learning more than their ABCs.  Try giving a children’s kit for learning a foreign language or even sign language.  There are intellectual benefits to learning a second language early on and there are plenty of options suitable for children.  My two favorites are Dino Lingo and Signing Time. […]

[…] Get kiddos learning more than their ABCs.  Try giving a children’s kit for learning a foreign language or even sign language.  There are intellectual benefits to learning a second language early on and there are plenty of options suitable for children.  My two favorites are Dino Lingo and Signing Time. […]