Sentimental on the First Day of Preschool

written by Ivy B September 7, 2015
This post contains affiliate links which may earn me commissions should you click through them and take certain actions. As an Amazon Associate I earn from qualifying purchases. See full disclosure here.

It was the night before preschool and, while putting my daughter to bed, I experienced some emotions I hadn’t expected.  I’d spent weeks buying school supplies and researching lunch and snack ideas.  I spent the days, leading up to this night, preparing foods to reheat for breakfast to cut down on time needed to get ready in the morning.  The night before, I prepared lunches for the week, because I didn’t want to beat the school morning rush.  And, I even planned my doctor’s visit to happen right after drop off time, as I was eagerly anticipating having a doctor’s appointment where I could concentrate solely on my appointment.  I was excited to finally have some time to myself as I knew in just 3 short months I would have a new baby taking up every bit of it again.  Yes, I was looking forward to getting 3 days a week to spend however I chose.  I was certain I was ready for the first day of preschool!

But, the weeks (or months) prior, I watched my daughter grow into a more capable and independent little lady.  I can’t recall how many times I heard “I don’t need your help.”  She began picking out her own outfits, dressing herself, and brushing her own teeth.  She turned four and her independence was ever-growing.  Every night, after reading, singing, and a bit of cuddling, she would kick me out of her room when she was ready to read to herself and go to sleep.

This particular night though, she wrapped her arm around my neck and pulled my face closer to hers.  Then, she kissed me and said “I love you mama.”.  We don’t have those moments often and I began to wonder how many more times I would get that from her.  They never seemed to be enough.  Too many times I practically beg for her affection, but realize she’s just not a cuddly girl.  I’m proud of her for all she is becoming, yet, she’s still growing so much. 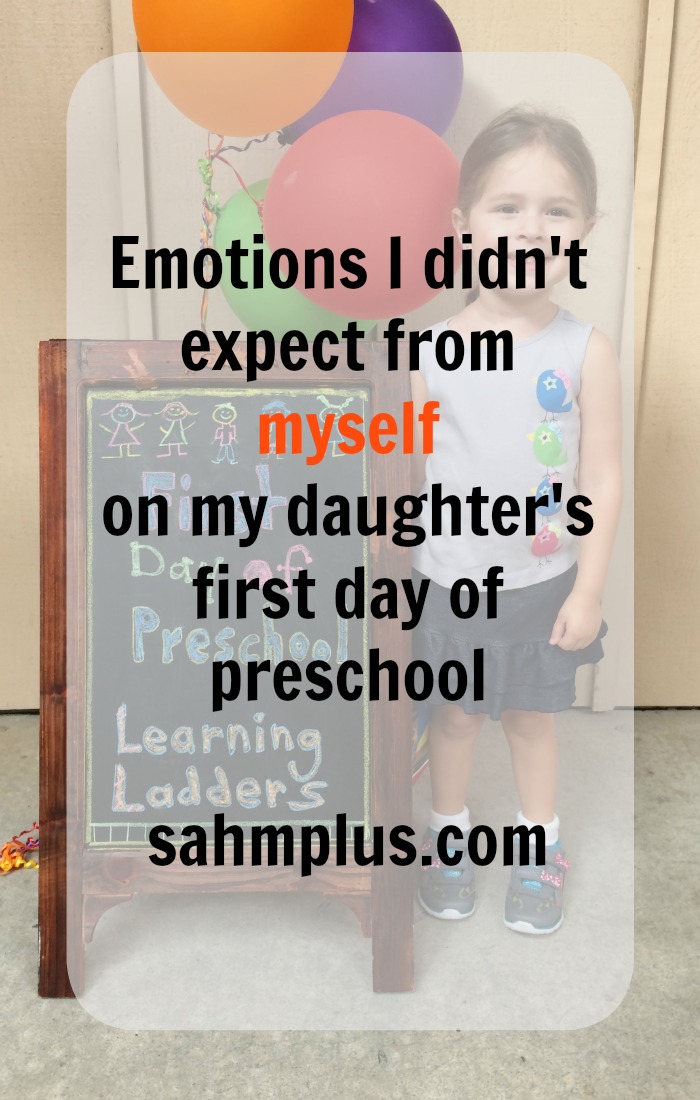 And then, her first day of preschool came.  She was excited and smiley.  I reminded her how to try to make friends and she asked more questions.  Will I leave her alone?  Will I pick her up?  Why wasn’t she staying the night?  And, right up to our hugs and kisses goodbye, she seemed ready.  But the hugs and kisses prompted anxiety.  Her face went grim and she looked me in the eyes to say “I don’t like you leaving me.”  I could see it in her face and I knew the reality was setting in as she followed us to, and almost out, the door trying to keep us there with “one more hug and kiss” over and over until her teacher caught on and whisked her away to check out the room.

My excitement, too, had become a mix of emotions once she began to understand it was really happening.  As much as I had been looking forward to some “me time,” it felt as though she thought I was abandoning her.  Though I knew this was something she’s needed for a long time, the anxiety in her face was burned into my memory.  I actually felt sad for her.

Was I supposed to feel bad for sending her to school?  Was it okay that I was kind of happy to have some time away from her?  I knew that I only had a few months to enjoy some peace and quiet before the new baby arrived.  I really needed this time as much as she needed to be at school.  I had plans to do more make-ahead meals, menu and grocery trip planning, and I no longer needed to feel guilty if I had to walk away from her to do housework.  Is it normal to expect to be excited only to find yourself thinking of it as a bittersweet moment?

My many mixed emotions made me think.  This is the LAST YEAR we’ll have days during the week that I can spend with her before Kindergarten.  My heart ached wondering if I’d done enough with her during the time we had.  Would she remember all the special activities we did?  Would she appreciate the many zoo, museum, and Disney trips we took?  Was she going to remember how tired and cranky I was on some of those trips?  Can I make even half as many memories in a single summer as I have in her 4 years?  Will we get to take another special trip to the Tampa Zoo and Aquarium, like we’ve done in the past?

When I picked her up in the afternoon, I asked how she did.  To my amazement, she didn’t cry and had a good first day.  She was busy playing with her new school mates and didn’t even realize I had arrived.  I was rather impressed at her success on her first day and realized all my worries were so emotionally charged … I didn’t have much to worry about on her end.

However, I was surprised to find that the second day of preschool was harder.  As school day approached, she kept telling me she didn’t want to go to school.  “I don’t like you leaving me” she would say.  She began telling me more and more things that we needed to plan to do … zoo trips, go back to the museum to see the dinosaurs, and then cried when I said we would have to make plans for it.  She didn’t really want to make plans, she wanted us to go right then so she didn’t have to go to school.  Her second day, she bawled as she waved to me out the window of her classroom.  I had no choice but to walk away, almost in tears myself and those mom-guilt worries came flooding back.  I spent a good majority of the day cleaning the house, trying to not worry about her.  And, when I picked her up in the afternoon, she had another fantastic day.  She was smiling and excited about the crafts and activities they did at school.

What I’m learning is it’s an adjustment for both of us.  As much as I was excited about getting some time away from her, I’ve spent the last 4 years trying to figure out what makes her tick.  4 years trying to make her happy.  4 years feeling like a slave.  Yet, 4 years we’ve done so much together that we both have to transition to new routines and separation.  Instead of worrying about her so much, I get to look forward to the end of the day when I see her smiling face and hear all about the exciting activities she participated in.

How did you handle the first day of preschool?

[…] yesterday we were reading books to prepare for preschool.  Just a moment later, she went to her first day of preschool and I was overcome with emotions I hadn’t […]

[…] Feeling Sentimental on the First Day of Preschool […]