written by Ivy B June 13, 2018
This post contains affiliate links which may earn me commissions should you click through them and take certain actions. As an Amazon Associate I earn from qualifying purchases. See full disclosure here.

What I wish I’d known before I became a mom … because parenting isn’t for the faint of heart!

I spent many years ready and waiting to become a mom.  As the time drew nearer, people began to shower me with advice and their experiences about children.  Of course, because I had never had a child, I had my own ideas of how raising a baby was going to be.  I thought the sleepless nights were something you get to used to.

Now that I’ve had two babies, I’m grateful for the “warnings”.  Still I feel like there was a huge piece of advice that had been left out. 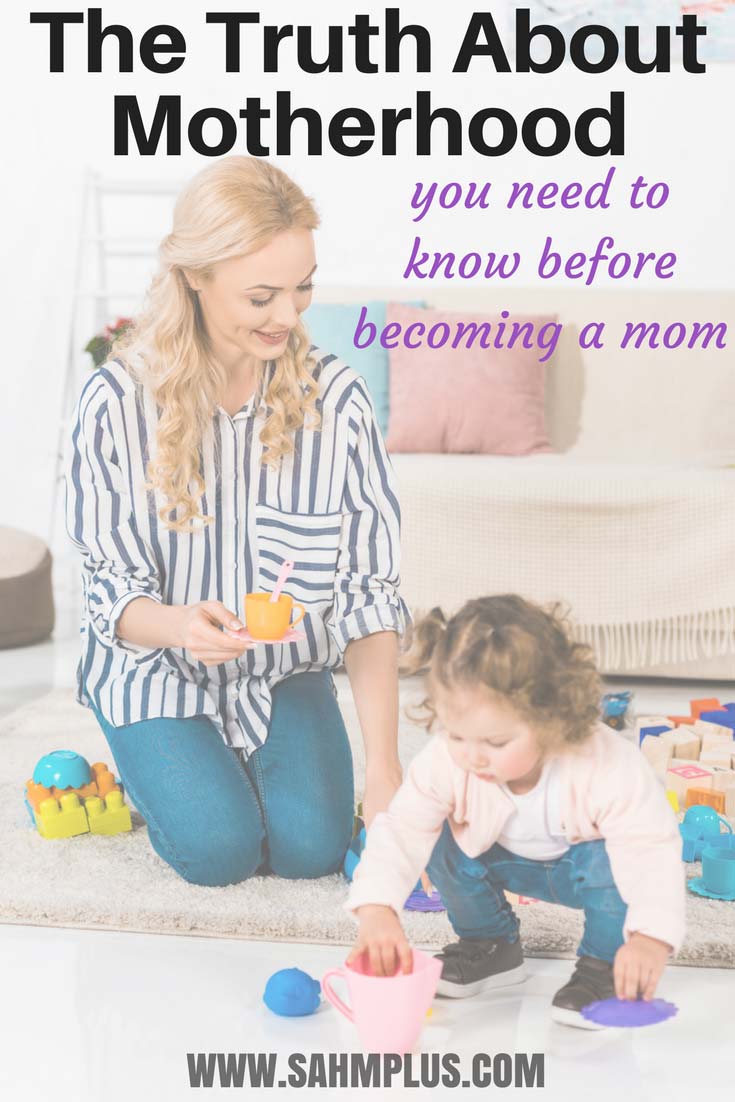 We’ve all heard: “It’s Hard Work”, “Get plenty of sleep now…”, “It’s rewarding”, and any other seemingly tall tales parents like to tell us soon to be first-timers.  There’s all sorts of advice about how to get baby to sleep, breastfeeding, and potty training.

If you thought having kids was going to be fun, there was certainly at least one person to tell you otherwise.

But, the real straight-forward truth?  That’s not something people dole out willingly.  Though in retrospect, it should have been mentioned often.

You know what I wish I’d know before I became a mom?  This is exactly what I needed to hear, and I think you do, too!

Becoming a mom is going to make you crazy!  Don’t expect that you’re going to always be smiling and happy.  The images you see of motherhood only paint part of the picture.  You’re going to look disheveled some days, you’re going to be lost and confused, and that’s perfectly okay!

You’re going to go through periods where you ask yourself why you thought having a baby was a good idea.

You’re going to want to get away from the one thing you’ve been waiting for all this time.

And, you’re probably going to feel like a shitty parent for having all sorts of nasty thoughts about having become a parent.

You’re almost always going to wonder “Am I a Good Mom?”

I’m telling you this because, no matter what kind of warnings I received beforehand, when my daughter came along (after a mostly wonderful pregnancy), I was hit with a reality no one warned me about.

To be fair, some of what we dealt with no one could have guessed would have happened. (In the following links, you can read more on unexpected milk & soy intolerance that couldn’t be diagnosed because there was no “allergy” symptoms AND a misdiagnosis of partial malrotation leading to an unnecessary surgery,: Part One and Part Two).

Here’s my advice to you if you’re a soon to be new parent or a parent in the midst of the first few months: Allow yourself to have your negative feelings about becoming a parent and express them (some other clueless new mother might just appreciate your honesty).

I would have given anything to not feel like I was the only parent out there that hated the first 6 months of our daughter’s life!  Trying to make the most of our situation was extremely hard and it never helped that people couldn’t just be honest and tell me that the first few months may be the least enjoyable time in a new mother’s life!

It doesn’t make you a shitty parent for having some negative emotions because having a baby truly IS hard work that will test you in ways you can’t prepare for.

AND THEN – when you make it through all the first time mom or new baby stuff – you’ll come across another phase that sucks. BUT, you will get through it and it is rewarding!  One minute I can’t stand to be home with my daughter because she’s in “fuss-butt mode” (as I like to call it) and then she’ll turn around and do something amazing or sweet.  My heart melts and I nearly forget that things sucked just moments ago.

Then, I was crazy enough to have baby #2, and I’m going through all the same feelings I had, multiplied by 2 because it’s a roller-coaster ride between them all day.  And I’m pretty sure I have no sanity left in tact at this point.

Spread the love
Was this article helpful?
YesNo
Follow my blog with Bloglovin
9 comments

It is also the hardest as your trying to learn what is right not only for your baby but for you and your family too. There was days I wanted to run screaming from the house and to never return. Now that he is 5 I must say I still have that thought sometimes. So if I am not normal sue me.

It's so wrenching sometimes to see what new moms these days go through. In my day there was no FB, Twitter, Blogger… we all had to just do it and we weren't being held accountable by the online world as well as the offline world. My mother made it look easy but I think those are just some mom's that don't need any assurance but by family. I like a world like that and not today personally. I'm so proud of people like you who write articles like this and are so honest!! Refreshing….

I have no kids, have few friends with kids however I can definitely appreciate how challenging it would be for a new mom. Good for you for sharing those feelings. Although I don't think "a new mom to be" would believe them until they have actually experienced them. Best Regards, <

As someone who has been through all the stages and survived, I can tell you it gets easier and more fun. The toddler years where you spend 2 hours packing and getting ready for the pool, only to stay 30 minutes before one of your kids completely melts down, only last for a while. You will soon be one of the “lawn chair moms” and enjoy wonderful summer days while your elementary school age kids play for hours. Then one day they don’t want to go to the pool anymore. They want to go hang out with their friends and you spend years driving them from place to place to place…. Finally the last one gets their driver’s license and suddenly 15 hours appears in your week that you never had before. And hi ho, hi ho back to work you go to help pay for college. Try to enjoy each day as best you can. The best advice I ever got was that it is not “nap time;” it’s “quiet time.” You can send fighting kids to quiet time for an hour, but not to nap time. Set the rules and stick with them. Everyone snacks at 3:00 and that is it. If you don’t like your dinner, that is sad, but sorry… Everyone puts their shoes and backpacks in one place. These things will save your sanity. Best wishes!! You got this!!!

That’s great advice … many of these things we already do. The toddler does have nap time, which he doesn’t really fight me on, but big sister gets quiet time. I’m responding during said time 😉

I think this goes hand in hand with what people post on social media. Everything is perfect, toys are picked up, & child is cleans &happy. If we were to just be honest with what happens, then there would be a bigger sense of community & not “I’m a better mom than so & so”. Great read!

You’re right! I try to be an open book on Facebook so people know life with kids isn’t all sunshine and rainbows. Unfortunately, most people aren’t equipped to being supportive to it either … probably because, like you said, there’s isn’t a sense of community when no one else can be honest enough that it’s not all rewarding and perfect, especially in the early years.

OMG! Thank you so much for this post. I definitely needed to hear this right now as I am going through terrible twos and it is for sure rocking my world. This is the first honest post that I have read about motherhood ever and I am glad someone if finally talking about this! Thank you so much!

I always try to be honest, because I feel, like you, no one else is. That’s how I got duped into having two kids LOL