How To Catch a Lizard In The House

written by Ivy B May 1, 2020
This post contains affiliate links which may earn me commissions should you click through them and take certain actions. As an Amazon Associate I earn from qualifying purchases. See full disclosure here.

Would you think you need to know how to catch a lizard in the house as part of your homemaking duties?  Well, when no one else is home, it’s up to you!

I don’t know about you, but I’m seriously not cool with lizards.   Well, at least not in the house.  And not near me.

I mean, it’s not like I hate them.  I have a healthy enough respect for them and wouldn’t like to hurt or kill one, you know?  Not intentionally, anyway.

But, in the heat of the moment, when I’m surprised by a lizard in the house, I won’t be held responsible for my actions.  Sometimes logic isn’t my strong suit depending on how I’ve been surprised.

So, the other day, I was busy with my housekeeping and moved my trash can to hand-wash the tile floor.  I noticed a strange spot on the back of the trashcan that looked like the black plastic had been cut and peeled up.  You know how plastic looks when it’s been cut, right?

When I bent over to inspect the area, the lizard ran.

My heart was racing.

Oh my god.  How do I catch this lizard in my house? 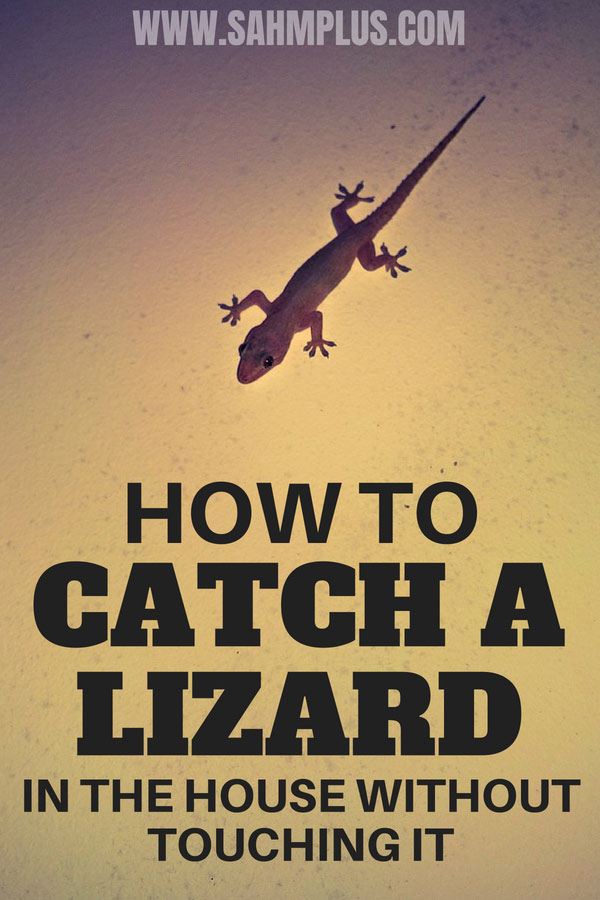 My expert lizard catcher (Shelby, our seven year old daughter) wasn’t home.  And, I wasn’t planning on touching him.  So, I had to remember how to catch a lizard in the house on my own!

Wanna know my secret to catching a lizard without touching it?

How to Catch a Lizard in the House

Now this is just one of several methods of catching a lizard inside.  It’s the only method I’ve ever used because I’ve always needed to catch a lizard quickly to get him out of the house fast!

Supplies Needed to Catch a Lizard

Gloves (if you don’t want to touch the lizard)

Clear plastic bowl or cup (choose something with straight edges to ensure a good seal on a flat surface)  I typically use old Rubbermaid containers to catch a lizard in the house!

This is how I catch a lizard in the house, especially because I don’t have to touch it!

If at all possible, keep an eye on the location of your lizard.  This method is only useful if you actually know where your lizard is!

Cut the rounded edge off the paper plate so that there’s enough room to slide it under your bowl or cup.

Now, gather your plate and bowl (or cup).

First, trap your lizard by placing the bowl or cup over him.  Make no mistake … you must be fast to catch a lizard in the house. 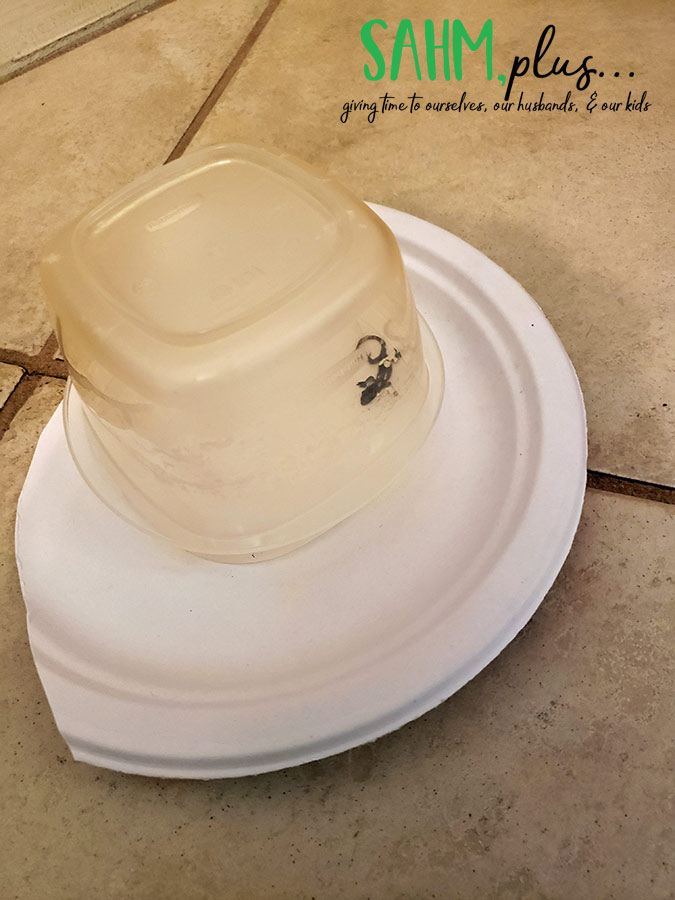 Next, slide the paper plate under the bowl.  You’ll need to do it slowly so that the lizard tries to step onto the plate.  Be sure to slide it completely under the bowl, so there’s no path of escape for the lizard.

Keep one hand over the bowl and the other hand under the plate.

Walk it over to the door and set it down gently.

Carefully grab the bowl and plate so as not to create a gap, walk it outside, then open the side away from you toward the area you want the lizard to go to.

Congratulations!  You now know how to catch a lizard in the house and remove him without touching him.

How to catch a lizard in the house without touching it originally appeared on Sept 12, 2018.

Update:  My lizard loving daughter asked us to let her have a pet lizard.

At first, I wondered “if I’m teaching people how to catch a lizard in the house without touching it, how am I going to handle having a lizard as a pet?”

Well, she and my husband were rather convincing and we got a pet lizard.  And, I learned to not only touch, but hold her!

Watch my daughter’s first video about her new pet!

Spread the love
Was this article helpful?
YesNo
Follow my blog with Bloglovin
3 comments

The Benefit of Putting My Husband First

Worried Your Child Is A Sore Loser?

How to Easily Clean Tile Floors with Vinegar...

I’m an Overwhelmed Stay at Home Mom: What...

How to Make the Best Housekeeping Schedule for...

These 5 Simple Tips Will Help You Start...

Things To Think About While Holiday Cleaning

15 of the Best Posts About the Perfect...

Master Your Family Schedule – A Book on...

The Best Housekeeping Schedule is One You Build

Thanks for a great article

Thank you for sharing how to catch them, I’m also afraid to touch this animal.

Check dark, enclosed spaces to see if the lizard is hiding there. Lizards often enjoying hanging out in small or covered spaces. However Great tips you have given for catching a lizard