Guess Which Grocery Delivery Service I Think Is The Best?

written by Ivy B October 10, 2018
This post contains affiliate links which may earn me commissions should you click through them and take certain actions. As an Amazon Associate I earn from qualifying purchases. See full disclosure here.

I’ve been having some one else do my grocery shopping for a couple years now.  Let’s talk about Shipt VS Instacart and which I think is better.

I’ve been a long time, loyal customer of Shipt.  Admittedly, it was the first and only grocery delivery service I have used and had been pretty darned happy with it.

Recently, however, I noticed that there was far more support of Instacart.  Friends were using it and my fridge only included the Instacart app.  So, I wondered what I was missing out on.

So, I set out on a mission to figure out why Instacart seemed more supported than my beloved Shipt.  And then I wrote why I might switch to Instacart for grocery delivery.

If you’ve ever wondered which grocery delivery service was best, I’m going to go through my comparisons after having used Instacart now for two weeks. 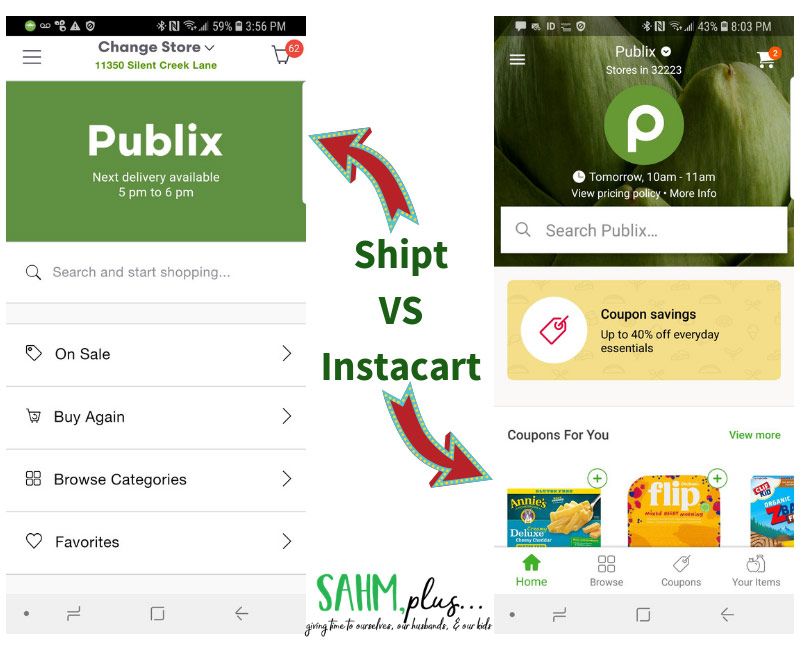 Shipt VS Instacart: Which is Better?

First of all, I totally believe that all moms should be investing in a grocery delivery service.  Though there are plenty to choose from these days, I’m only comparing Shipt VS Instacart because

a) these are 2 of a few available in my area, and

b) I want the delivery to my home, not to go out to pick up my groceries like some services offer.

I also have dietary restrictions, which make it very important for my groceries to be picked correctly, so I do take that part into account as well.

While both services offer the same shopping times (at least that I’ve noticed using them to shop mainly at Publix), there is a difference in how time is allotted to shoppers.  According to one of my Shipt shoppers, I was told she liked working for Shipt because they weren’t strict about shopping times.  Instacart, on the other hand is strict about having their shoppers complete an order in the 1 hour window.

I’ll discuss this further, but this begs to question how accurate can one be on a strict timeline, right?

Well, Shipt shoppers have fallen short on a few of my items or replacements, regardless of how quickly or slowly they’ve shopped.

Additionally, with Shipt, because of the lax timing, I’ve had several really slow shoppers arrive past my delivery schedule.  Though most times this isn’t an issue, there have been times I’ve had something planned and needed to go but couldn’t because my shopper arrived later than the delivery window.

For me, Instacart’s strict shopping hour policy is much more in line with my needs, although it also means a shopper won’t spend as much time searching for a suitable replacement if they need to read labels to find an allergy friendly item.  I like knowing that my groceries will be delivered within the scheduled hour using Instacart, which can’t always be said about Shipt shoppers.

Taking into account my gluten free requests, it’s important that my items specifically marked as gluten free actually be what I need when I need it.  Or, if I want something organic, I’d like to receive organic unless it’s out of stock.

Shipt shoppers have fallen short on this on several occasions, though Shipt has always been good about offering a refund when I’ve needed it.

Now, one of my new Instacart shoppers explained that she loves working for Instacart because she has to scan every item into her app while shopping.  This prevents her from placing an item into the cart that doesn’t match the item ordered.

What this means for me, as the customer, is that unless an item is out of stock, I’m definitely getting what I asked for.

In the two shops I’ve had with Instacart, I haven’t had issues with needing refunds once my items arrived at home.  In two years with Shipt, I’ve seen numerous refunds for items that weren’t right.

Because of the scanner feature in Instacart, I feel as though my items are more  likely to be right than wrong.

3. Chatting with Your Shopper: Shipt VS Instacart

With Shipt, your shopper is available via text throughout their trip.  However, if the shopper doesn’t  message you to let you know they’ve started shopping, I’m unsure how you’re suppose to contact them.

Occasionally I’ve needed to make last minute modifications or additions to my list, so having the ability to chat with my shopper is important.  Only once did I not have a Shipt shopper contact me until after she’d completed the shopping trip and was on the way.  Thankfully, I didn’t need to make any changes to my list, however, she did pick up a few replacement items that weren’t gluten free safe.

Instacart offers chatting with your shopper directly in the app.  The handy button let’s me start a chat while they’re shopping if I don’t hear from them first.  All the chat and replacements are completed in the app and can be approved or request a different replacement.

Your shopper may also contact you via phone call if there are further clarifications needed.  Both delivery services allow this feature.

I’ve been generally happy with both, but I like that I can initiate contact with my shopper through the Instacart app, which makes it better, in my opinion.

Pricing for Shipt VS Instacart isn’t as clear cut as you may think.

When I first started my research, I thought Shipt was where it was at when it came to pricing.  Shipt was a mere $99 for an annual membership VS Instacart’s $149 annual fee.

Well, turns out there’s a big difference in pricing, beyond the annual fee!

For starters, both services increase the prices of individual items and I’m totally cool paying more to have someone else do my grocery shopping … because there’s a thousand other things this mom can do instead!

Secondly, Instacart now charges a 5% mandatory service fee where Shipt doesn’t.  And, if you’re anything like I was, you’re probably thinking Instacart has priced them out of the market.  But you’ve gotta see this! 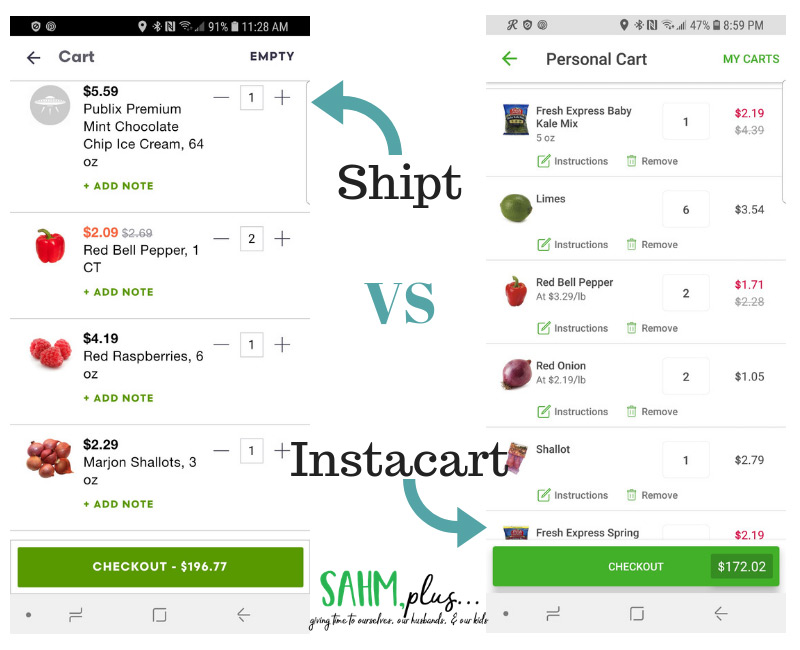 In the last few weeks, I’ve compared my shopping lists side by side with exactly the same products (aside from a couple differences based on either one not having something that I have to “special order”.  Each time, even with the additional service fee, I’ve saved approximately 11% on my total grocery bill using Instacart instead of Shipt.

When it comes down to it, Instacart wins on pricing because it takes me just a few regular deliveries to make up the difference on the annual fee, and then I just save that 11% for the remainder of the year.

(Note: you are still spending more than if you would by shopping on your own.  But, that should be a given.)

5.  Sales and Coupons: Shipt VS Instacart

Both apps have a sales tab, however, Shipt shows the “On Sale” tab very prominently on the first screen before scrolling.  Instacart, however, requires that you scroll down a bit before seeing “Weekly Sales”.

As for Shipt, there is no coupon savings section, although I do remember receiving emails about special savings when you purchase certain items during the week.  Unfortunately, remembering those emails wasn’t my strong suit.

So, although both show a store’s weekly sales, I prefer Instacart because of the additional in-app coupon savings section.

Note: If you type something specific (say Heinz Ketchup), neither app will suggest a similar product simply because it’s on sale.

6. Tipping Your Shopper: Shipt VS Instacart

Both services offer the chance to tip your shopper (and it’s something I recommend).  However, Instacart has a feature to include the tip with your initial order.

Now, I’m on the fence about this for a few reasons:

b) I have forgotten to tip my shoppers through Shipt until nearly a week after the shop (hello mom brain!)

Shipt requests a tip after the shopper has delivered groceries (which is mostly appropriate), but if I forget to go in and rate the shopping experience, I also forget to tip until much later.  Usually this is rectified when I start adding to items to my list for the following week.

Instacart’s feature actually saves me the time and hassle of remembering before a few days have passed.  Additionally, I’m able to change the tip amount after the transaction is completed, which is great if I feel a shopper warrants a different tip than I previously agreed to.

There’s no clear winner on the tipping function, but if you’re more likely to forget to tip after a shop is complete (like me), Instacart may be the better solution.

7. Problems With Food: Shipt VS Instacart

On occasion, I’ve had issues with food that goes bad before I’d expect it to.  Like recently, my avocados were purchased on Sunday and on Wednesday they were already growing mold before I got to eat them.

With Shipt, you’re able to go into your app and report a problem with your food by looking at your last order.  It’s all done within the app by clicking buttons.  Then you’ll receive an email about a credit.

Unfortunately, here it was just 3 days after having my groceries delivered with Instacart, and I wasn’t able to do an easy report of spoiled food through the app.  Instead, I had to send an email to explain that my avocados were already molding.  Thankfully, I received an almost immediate response that I would be credited for the avocados.

In my opinion, Shipt is the clear winner solely based on the in-app reporting features.  However, both Shipt and Instacart respond quickly and don’t give me any issues.

8. Do They Work With Meal Planning Services?

If you’re into meal planning you may be wondering if a grocery delivery service will work with any meal planning websites.  And, in “work with”, I mainly just mean that they’ll import your grocery list into your shopping cart.

The answer is yes.

The sad truth is, most of the meal planning websites I looked at work with Instacart, while very few work with Shipt.  It’s part of the reason I made the switch to Instacart.

Have you had groceries delivered before?

When it comes to Shipt VS Instacart, which is your favorite?  Are their other grocery delivery services you have tried or currently use?  What do you like about them?  Did I answer all the questions you have to make your choice between Shipt VS Instacart?  If not, ask away and I’ll see what answers I can find for you! 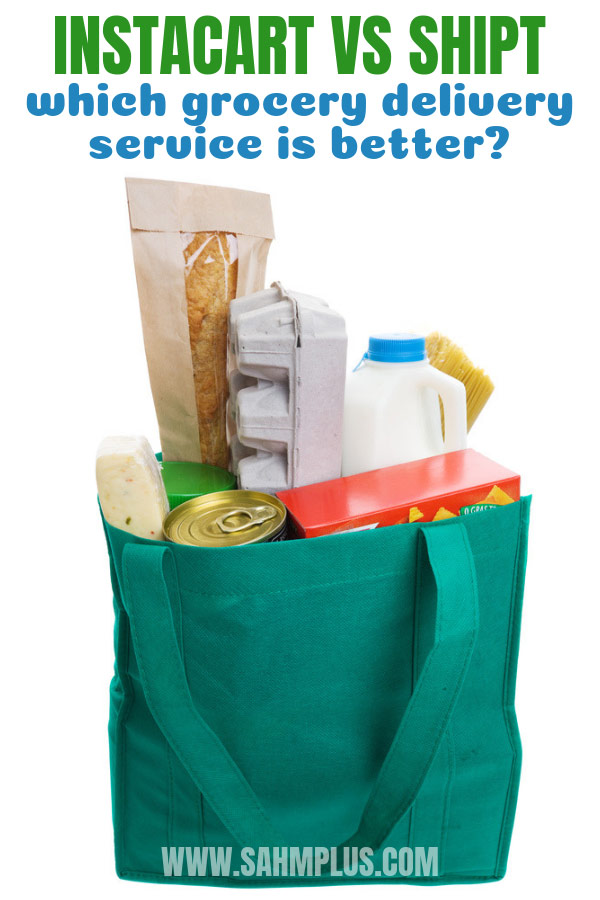 6 Of The Best Monthly Subscription Boxes for Babies

Being a Stay at Home Mom is My Job

5 Swing Sets For Small Yards That Will...

How To Choose a Baby Carrier You’ll Love

9 Smart Ways To Save On Baby Stuff