I Didn’t Know a Get Pregnant Party Was a Thing

written by Ivy B January 12, 2018
This post contains affiliate links which may earn me commissions should you click through them and take certain actions. As an Amazon Associate I earn from qualifying purchases. See full disclosure here.

A strange trend in the world of pregnancy and fertility has popped up.  I’m not sure I’m for a get pregnant party.  What do you think?

I had no idea this was a trending thing.  A “get pregnant party”?

I can attest this is a very real party trend.  I’ve seen people coming to my site from this Google search and I’ve read about it on forums like Baby Center.

Does anyone else think this is kind of a weird trend?

At first thought, the idea of a get pregnant party kinda creeps me out.  But beyond that, I kind of worry about the potential for disappointment and feeling of failure.  Not to mention the added pressure that will come with everyone knowing your conception plans. 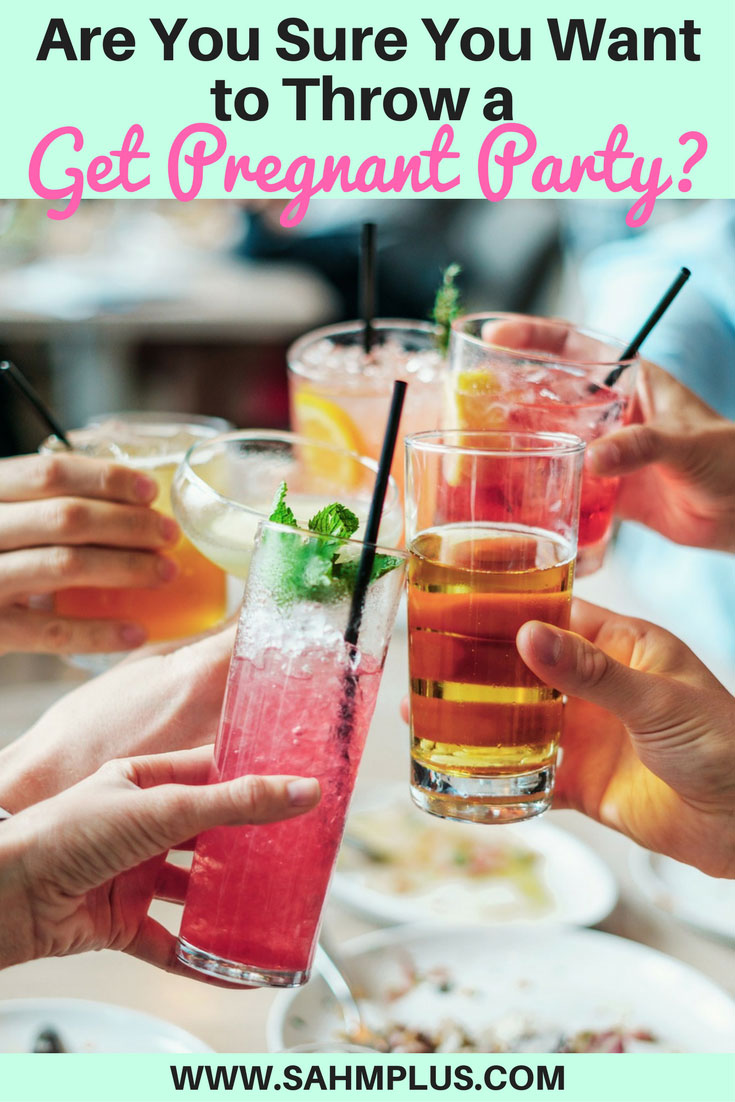 Why I Wouldn’t Throw a Get Pregnant Party

As an invitee, I think it’s weird.  Unless you’re my best friend who regularly shares intimate details of your life, I’m not sure I need (or want) to know you and your husband are trying to conceive (TTC).  I don’t want to sit around a table toasting to your sex life.  It’s bad enough I know what you have to do to have gotten pregnant.  I don’t want to celebrate and toast to the deed ahead of time.  Seriously, just strange in my mind.

As a parent myself, I remember telling some individuals that we were planning to have a baby.  Those individuals could be trusted to be supportive,  caring, and understanding if things didn’t go well.  I couldn’t have imagined sharing the news with all my friends and family, no matter how close they were.

It was a private event.  Not to mention, the first time we decided to have a baby, I struggled with my fertility.  At the time, I was learning that my cycles were off, which made TTC’ing much more of a chore.  I really had to make some major changes in order to get pregnant naturally.  I may have cried to one close friend about my pregnancy journey at the time.  But, she was the one person I could trust to not put pressure on me.

The thing about trying to conceive, in my mind, is that there’s already so much pressure.  That which we place on ourselves because we’re finally ready to have a baby.  The pressure we receive from our own parents hoping to become grandparents.  And an unspoken pressure from society to have children … because it’s just what we’re expected to do once we’re married.

I can’t wrap my mind around how much added pressure there would be if we invited everyone to a party proclaiming we’re TTC’ing.  If we struggled with fertility, would I be expected to let everyone know?  Would I not feel like a failure if it didn’t happen?

What if I never could get pregnant?  Would I need to throw a big pity party and invite all the get pregnant party attendees?

Sure, perhaps I’d have a larger support system to cry to in the event we experienced long term fertility issues.  But, that was really private, too.  And I would have preferred to keep it between those I felt wouldn’t have such an emotional investment in it.

No, guys, I chose to keep our TTC plans semi-private.  I saved the excitement for the day I could tell everyone I was finally expecting a baby!  I wanted to see Grandmas’ faces light up at the news.  I wanted to hear the excitement in their voices.  I wanted the huge hug from my dad who’d been waiting to spoil new grandbabies.

I didn’t want pity when things weren’t going as planned.  I didn’t want the questions.  I just needed to be left alone until the time was right.  Because, for me, it was easier to handle the waiting not feeling as though I was letting someone down.

Now, that’s my whole thought process on a get pregnant party.

But, my friend Echo helped me see why throwing a “getting pregnant party” might be a sweet idea for a friend who is struggling to TTC.  Plus, she’s shared a few gift ideas for friends that are trying to conceive.

So tell me in the comments, how do you feel about a Get Pregnant Party?

Accepting That This Is The Mom I Became

What You Should Know About the Risks of...

Best Books About a New Sibling to Help...

How To Get Pregnant With Irregular Periods

Tips For Birth Without Epidural

3 Myths About Pregnancy & Dental Care You...

11 Foods and Beverages to Avoid During Pregnancy

Why You Should Be Discussing Opioid Alternatives for...

I’m not sure you’re thinking about this like a lot of people searching for it. The idea as I understand is for women that aren’t married, and can’t afford artificial insemination, that want to get pregnant. They arrange a party with prescreened men to have anonymous unprotected group sex with while ovulating, increasing the odds of getting pregnant, while making it impossible to identify which of dozens of men, are the father.

Well, your comment is rather interesting. When I researched the topic prior to writing about it, I found articles and forums discussing exactly what I wrote about. None of my reading even remotely hinted at what you’re suggesting. I don’t even know what more to say, other than, thank you for your interesting comment.