written by Ivy B June 26, 2017
This post contains affiliate links which may earn me commissions should you click through them and take certain actions. As an Amazon Associate I earn from qualifying purchases. See full disclosure here.

I had always thought I’d be a mom and when the time came to start a family, I couldn’t have been more excited.  When I got pregnant the first time, I boasted to my husband that I felt as though I could be pregnant for the rest of my life.  Then, we decided to have another baby and the second pregnancy differences were quite noticeable.  Let’s go through the list of ways my pregnancies differed and see if you can relate. 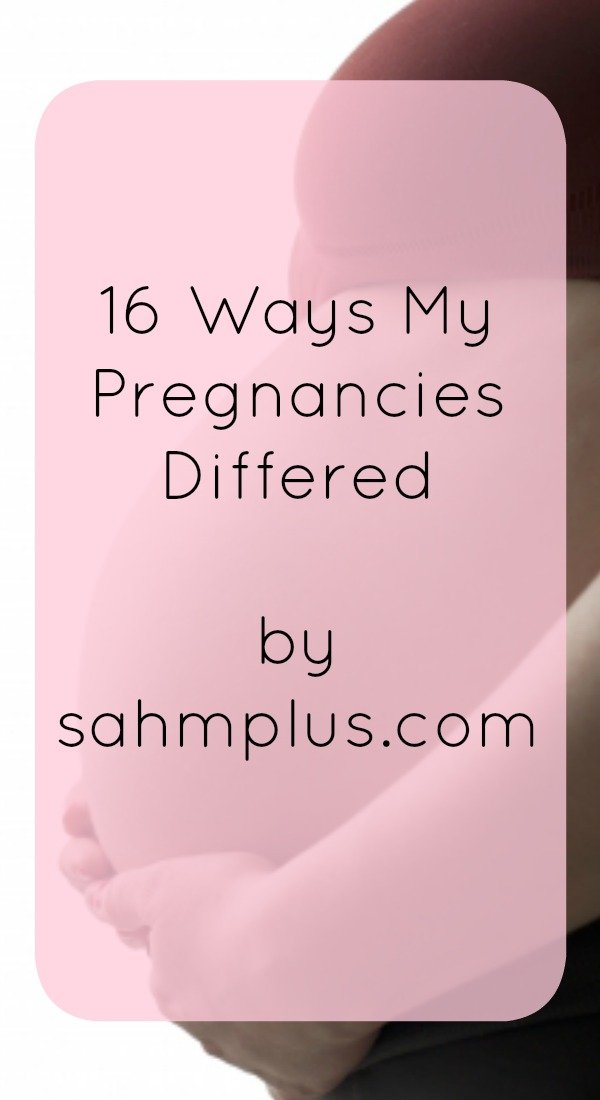 Image courtesy of patrisyu at FreeDigitalPhotos.net

1) Disorganized.  With our first, I had a notebook made up right away that separated documents, OB receipts, sonogram pictures, etc.  This time around, I had forgotten when I had ultrasounds, had to research payments, and even temporarily misplaced sonogram pictures.


2) More concerned about finances.  Our health insurance is decent when it comes to monthly premiums, but most services aren’t covered until we reach our deductible.  I’ve had to go over all our bills and global maternity payments to catch when we’ve reached our deductible so that all bills thereafter fall under the 80/20 rule until we reach our out of pocket maximum.  The global maternity payments ate up nearly every bit of our deductible, which was a huge up-front expense to pay in 4 installments.  Not to mention the ridiculous cost for ultrasounds and Qnatal blood work.

3) Certain lady parts grew faster and bigger during pregnancy.  I had to buy new bras (and even had a chance to review a Cake Maternity and Nursing Bra) because said parts were practically falling out of my original bras.  And, I even had to start using stretch mark oil and cremes because I was already starting to see some.  Growth in that area didn’t happen until after my first baby arrived … not during the pregnancy.

4) Happened quickly.  There was an unexpected discussion about adding a new baby to the mix of our already crazy 3 person family.  I had expected my husband to say that he was leaving me, because he had been so adamant about having only the 1 after the trouble we went through with the first.  Surprisingly he agreed, I had my IUD removed within the week, and we were pregnant a couple weeks later.  Not at all like the first which took us roughly 8 months of very trying.

5) I loved being pregnant the first time.  Second time around?  I hardly had an enjoyable moment.  Between 1st trimester nausea and being busy with a cranky preschooler, I scooted through the half-way point without much excitement.  I didn’t even receive the 2nd trimester energy boost I needed.  So, I was tired and cranky all day, every day, which takes us to #6.

6) I never had energy.  I remember feeling like superwoman pregnant with my first as I walked around Chicago for a full day with my huge belly.  This time?  I couldn’t walk two feet without being exhausted.  If I worked for 20 minutes to an hour around the house, I could hardly function the rest of the day.  My daughter was regularly upset with me because I simply couldn’t entertain her as much as she was used to.

7) I had back pain.  Add some other random aches and pains, but the back pains were pretty annoying because they became daily occurrence through the 2nd trimester.  I was actually having to take Tylenol more regularly than I would like and bother the hubby for quick massages to help relieve some of the pain temporarily.  I couldn’t even play games on the floor with the family for more than a few minutes before excusing myself.  And, I had to get myself one of those maternity belly bands to help me get through activities when I would be on my feet for a while.

8) I chose an OB I didn’t like.  This one is HUGE.  This particular OB irritated me the first time I met him when I was pregnant with #1 and I refused to see him during the remainder of my pregnancy with her.  As luck would have it, he ended up being the doctor on duty when I was delivering my baby and we experienced a surprisingly wonderful delivery.  So, I put my dislike for him aside and chose him as my OB in hopes for similar results with #2.

9) I’m afraid to breastfeed.  The first time around, I was gung-ho.  Breastfeeding was the only way to feed a baby properly.  This time?  Yeah, I blogged about it… I confessed I’m afraid to breastfeed.  I still know in my heart it’s the right way, but the first time around didn’t go as expected.  It was a nightmare.  I’m terrified of going through it again, and, I’d love someone else to help bear the burden of some sleep-loss.

Related: Helpful advice on how to breastfeed a baby

10) My breast pump was covered by insurance.  Thankfully, with baby #1, I was working when I was pregnant, so purchasing an expensive breast pump wasn’t the end of the world.  I saved the stupid thing because I couldn’t bear to part with such an expensive item after not being able to use it for a full year.  This time?  Now these things are covered by insurance.  I get a new one for free anyway.  I know, I just told you I’m afraid of breastfeeding, but I’m going to try again … no one else is home to pop a bottle in the baby’s mouth and give me a break during the day anyway, so I might as well try again.

Related: 8 smart ways mom-to-be should prepare for her new baby

11) Kick Counting.  Um, how did I not know about this?  My doctor sure never mentioned it with my first baby and I only read something about it online as I was nearing my 3rd trimester.  Thankfully, any of the guess work on how to approach kick counting was handled through a special feature in Baby Bump’s free app.  Planning to sit for 20 minutes to wait for 10 kicks sounded impossible, but I was happy to find that we reached ten kicks in under 10 minutes.  Now that I’ve done my research, I know that 10 kicks in 2 hours is a sign of a healthy baby, and by doing kick counts, we can know sooner if there are problems.

12) I just wanted it to be over.  Remember, I didn’t like this pregnancy as much?  And, as much as I am about all natural birthing, I got to a point with the second that I was telling my husband I was ready for them to cut the little guy out.  I know I’d have been terribly upset with myself over it later, but I was miserable.  Little guy was head down for such a long time, giving me lightning crotch, and some other horrible pains that I felt as though I couldn’t take much more.  And, it sure didn’t help that even nearly a week before he was due, I wasn’t dilating.  It was as if my body wanted to stay pregnant, regardless of how ready he was.

13) I didn’t buy much.  With my first, I went out regularly and purchased cute little outfits to help me stay excited about having a little girl.  I wasn’t thrilled about the possibility of seeing a bunch of pink & frilly things, so I ensured we had a closet and dresser full of clothes I could tolerate looking at.  Baby #2, however, should have been much more exciting and I had always loved little boy clothes.  Unfortunately, between the miserable pregnancy symptoms and having a toddler with me most of the time, I rarely had a chance to shop for the little guy.  I think I had a hand-full of times I was able to concentrate on purchasing things I liked for him, but it wasn’t as easy as it was without another kid in tow.

14) I went past my due date.  What a shock!  My first was born ON her due date, which is rare.  However, baby #2 decided he needed some extra time to bake.  Or, maybe my body wanted to get the most out of the last time it was going to be pregnant.  Either way, pile on the stress because I had to research my options extensively to try to have a natural birth again.  Thankfully, the little man decided to arrive on his own about 12 hours before our scheduled induction (the evening before 42 weeks).

Related: How to handle the disappointment when baby is late

15) I asked for a membrane sweep.  I’m against any and all interventions, typically.  But at 40w 5d overdue, having contractions for 2 days that weren’t going away but weren’t really worthy of my attention, I requested a membrane sweep in hopes that it would help speed my body along in the process.  My doctor and husband, both, were in shock that I requested it.  Oddly, neither sweep worked.

16) Had to schedule an induction.  Boy was that a hard one to take.  I hate the idea of medical inductions, but we actually had to discuss and schedule an induction.  I had wanted to wait to induce at the end of my 42nd week, to give myself and baby to get in gear, but when we began looking at the calendar, it put us too close to Christmas.  If we hadn’t had a 4 year old to ruin it for, it wouldn’t have been a big deal, BUT, we didn’t want to risk bringing baby brother into the world ruining Christmas for his big sister.  Talk about sibling rivalry from the get-go… and NO THANK YOU.  Again, thankful the little guy decided to show up before this happened!  (Would you like to know how we escaped medical induction even though he was 13 days late?)

Related: Can I ask to be induced?

Now, there were some ways that my pregnancies were the same.  Namely, having convinced myself I was in labor before I was actually in labor.  That makes the end that much more depressing.  I suppose we all get to the point at the end of the pregnancy that we’re ready to get those babies out, regardless of how we’ve felt about being pregnant for the first 8.5 months.  Additionally, baby number two got the hint and decided to arrive on his own the day before induction day!

Are you currently pregnant?

Don’t forget to create your Amazon Baby Registry! (Disclaimer: We are a participant in the Amazon Services LLC Associates Program, an affiliate advertising program designed to provide a means for us to earn fees by linking to Amazon.com and affiliated sites.)

Your turn: Share some stories about your pregnancy differences

What Tests Do I Need for a Proper Hypothyroidism Diagnosis?

What You Should Know About the Risks of...

Best Books About a New Sibling to Help...

How To Get Pregnant With Irregular Periods

Tips For Birth Without Epidural

3 Myths About Pregnancy & Dental Care You...

11 Foods and Beverages to Avoid During Pregnancy

Why You Should Be Discussing Opioid Alternatives for...