Is Switching to Aluminum Free Deodorant Going to Be Easy?

written by Ivy B January 16, 2018
This post contains affiliate links which may earn me commissions should you click through them and take certain actions. As an Amazon Associate I earn from qualifying purchases. See full disclosure here.

Switching to aluminum free deodorant was no easy feat.  Can you believe it took me a year to find the best natural deodorant that didn’t give me a rash OR make me stink?

Last year, I told you a bit about motherhood with an autoimmune disease.  I may have even bored you with some sciency details about Hashimoto’s.  I’d planned on continuing the series to help moms with health issues feel understood and seek appropriate care for themselves.

The truth about that health phase is the content I was writing I just didn’t feel very passionate about.  I mean, on a personal level, sure I enjoyed hearing all the sciency crap my doctor spewed at me as we’d commiserate over my latest round of lab work.  But, I didn’t really enjoy how I was presenting it to you, so I stopped.

I’ve realized I just want to share the daily struggles and triumphs I find in living my new semi-crunchy life.

You see, living with autoimmunity and several other health concerns, you begin to see life in a new way.  When conventional medicine fails or simply doesn’t treat or improve your quality of life, you begin to question everything you ever knew about health.  And, you start seeing chemical-laden products as another way to get yourself killed.  Yes, I went into a very dark, morbid space.

2017 brought about many changes in my life, including completely revamping my beauty and cleaning routines.  I threw out many “good” products in favor of less harmful ones.  I’ve tossed hundreds of dollars of conventional, grocery-store brand makeup products and ditched toxic toothpaste, all in favor of leading a less toxic lifestyle.  But, in the search for healthier daily practices, the one I struggled with the most was switching to aluminum free deodorant!

You probably wouldn’t believe that it took me almost an entire year to find a non-toxic deodorant that was comfortable and didn’t make me smell like a hobo.  It took some serious determination and will power to not just give up and switch back to conventional, toxic deodorant. 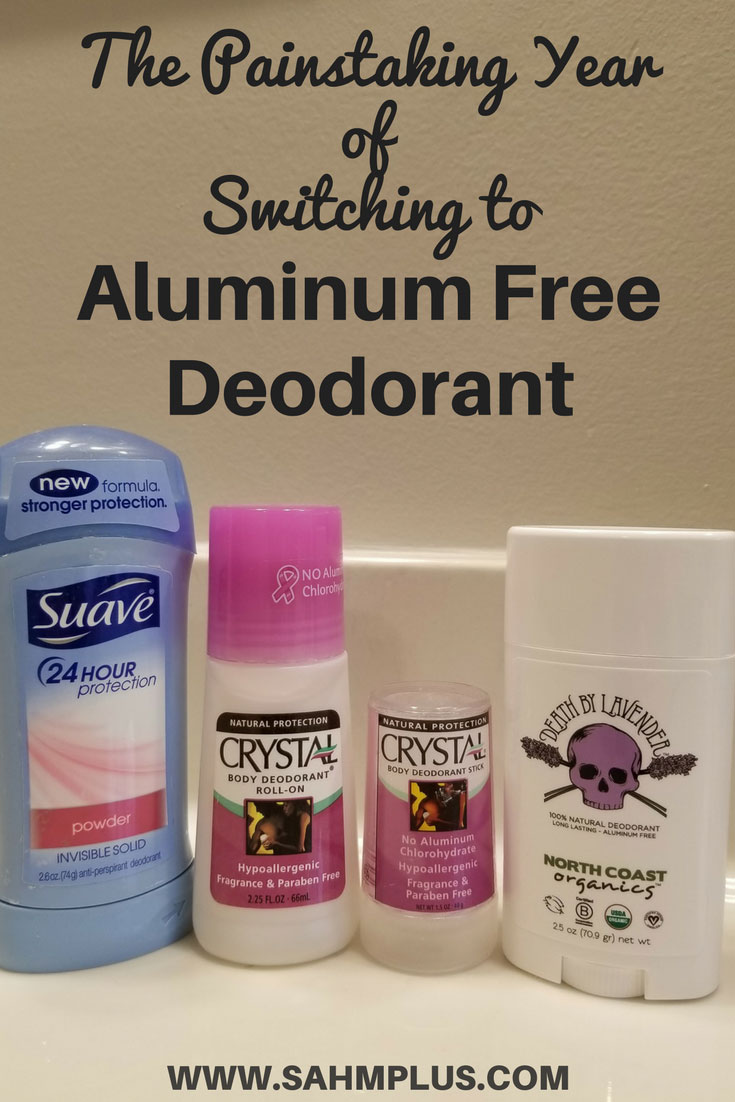 The problems with switching to aluminum free deodorant

When you begin to think about making the switch to a natural deodorant, you probably think “if it’s natural, it’s automatically good.”  Well, that was my mentality, anyway.  I’d naively assumed that switching to a natural deodorant was going to be an easy process.  Hell, I didn’t even think it would be a process.  I was certain I could just pick something off the shelf at my local health food store and be good to go.

It didn’t even remotely go as planned. 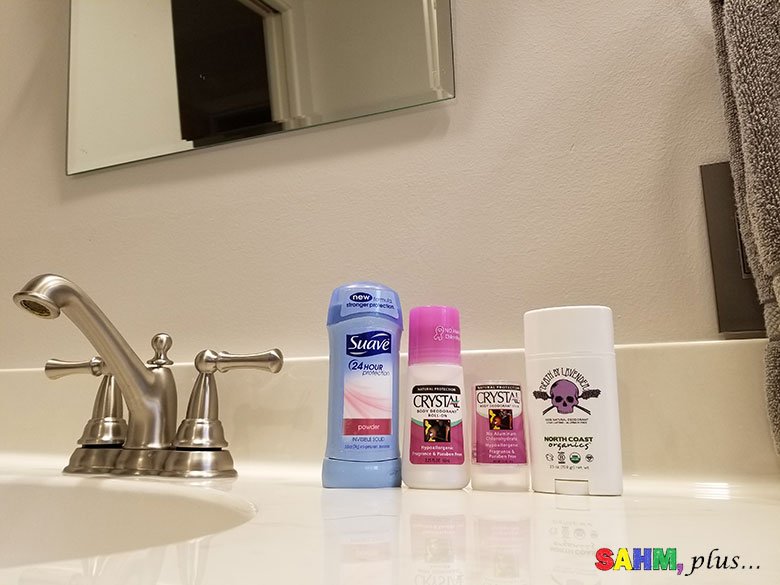 Apparently, you go through a form of armpit detox when switching to aluminum free deodorant.  This was something I’d never even heard of, because, well, I didn’t know anyone who’d done this.

When I began noticing that I couldn’t stop scratching my armpits, I began to worry.  It was so bad that I discussed with my doctor that I felt like something was wrong.

You see, I noticed a rash with my itching and thought it was razor burn, so I stopped shaving as frequently.  When that didn’t clear it up, I switched back to my conventional deodorant for a couple days and noticed less itching, but not completely gone.

So I quickly found a new aluminum free deodorant and the itching got worse.

It was so bad my husband thought I was crazy because I just couldn’t keep my hands out of my pits.  And I seriously thought I was going to die.  I’d nearly convinced myself I was developing more health problems.  So I switched again.

The stench after switching to aluminum free deodorant

My next switch was to an aluminum free, hypoallergenic deodorant.  Eventually, with this one, the itching stopped and I was thoroughly excited.  But, the excitement was squashed shortly after this switch when I began to smell horrible body odor.

My memory isn’t always the greatest, so I sometimes questioned whether or not I remembered to put on deodorant in the morning.  I had to make mental notes of actually putting it on and realized I wasn’t missing it in my morning routine.

About mid-day, the deodorant would just stop working and I’d smell horrible.  I began to feel really self-conscious about it.  If I had to see people, I’d squeeze my arms tighter hoping the smell wouldn’t emanate past me.  Then I’d worry that someone would catch on to it and think I didn’t bathe.  Or worse yet, I’d become the serious hippy chick that doesn’t even use deodorant.

Eventually I banished this deodorant after finding out that this was a specific complaint of this kind of deodorant from many people. 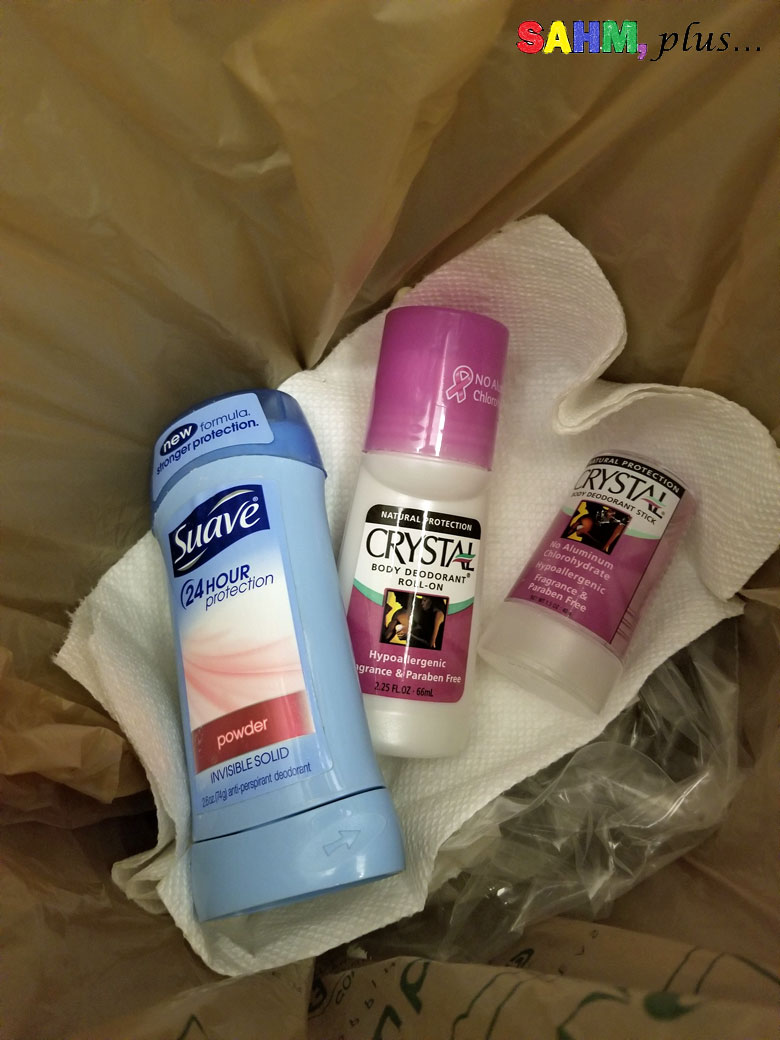 I ditched conventional deodorant and the stuff that made me stink!

I almost switched back

I took a couple weeks off from the hunt for natural deodorant, switching back to my reliable (and toxic) conventional deodorant.  I was mildly disappointed in myself, but at the same time, relished in the fact I could easily get my Shipt shopper to pick up my deodorant instead of making a special trip out to a health food store.  And, I wouldn’t have to worry about completely wasting more money on an expensive natural deodorant that would make me question my health and or sanity again.

But, as luck would have it, MommyCon sent me a mystery box of products to try out in August and tucked inside among all the other healthy goodies was a fabulous lavender smelling aluminum free deodorant.

I couldn’t decide if this was fate or the universe teasing me about the months I spent insanely itching and stinking for the sake of reducing another toxin in my life.  But, I figured there was no harm in trying [easyazon_link identifier=”B071S2LHKW” locale=”US” nw=”y” nf=”y” tag=”ivsvabasaan0a-20″ cart=”n” cloak=”n” localize=”y” popups=”n”]North Coast Organics[/easyazon_link] since it didn’t cost me anything.  And I told myself I would immediately switch back if I noticed any signs of itching or irritation.

Miraculously though, I was not only hooked on the scent, I never experienced itching, rashes, or body odor from this deodorant. 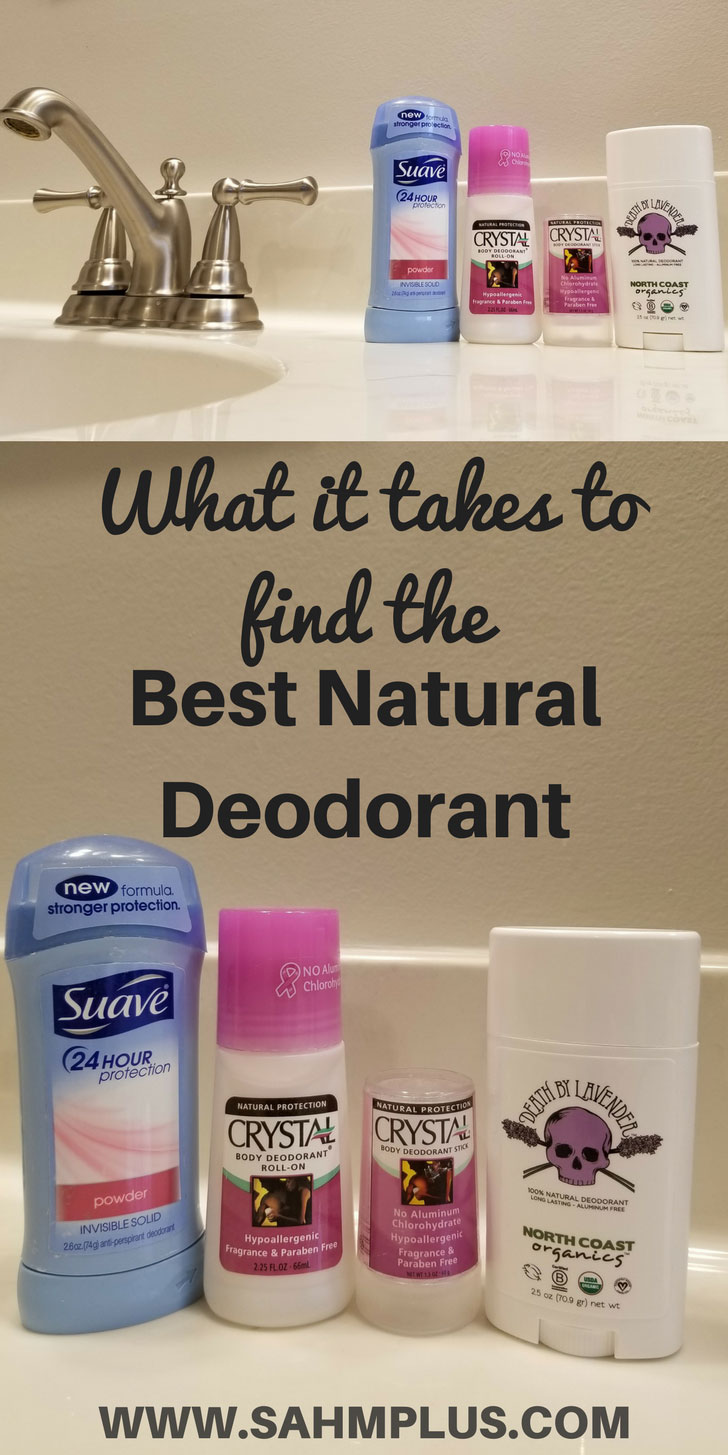 Accepting That This Is The Mom I Became

10 Benefits of Visiting the Library with a Toddler

Should You Try Medterra CBD Oil?

How to Celebrate American Heart Month

5 Reasons You Need to Switch to Stowaway...

Why I Use Desert Essence Anti-Breakage Shampoo on...

My eldest son joined me in switching after starting to get a reaction to the mainstream aluminum containing deodorant he’d used for several years. I haven’t tried the brand you mentioned and will have to consider it for the future as I’m trying to get everyone else in the house switched over.

As a breast cancer survivor, I have also been on a quest to find an effective aluminum-free (and preferably plastic-free) deodorant. There is definitely a fair amount of trial and error until you find the right one. I recently wrote a blog post on this very topic https://boomerecocrusader.com/aluminum-free-deodorant-reviews/