To the Mom Who Judged Me for Being on the Phone

written by Ivy B April 17, 2017
This post contains affiliate links which may earn me commissions should you click through them and take certain actions. As an Amazon Associate I earn from qualifying purchases. See full disclosure here.

I was struggling one morning dealing with being sick but forcing myself to get ready for an Easter event with our playgroup for my daughter.  I had been sick and sluggish for weeks and today was no different.  Except that this day, I had to put on my big girl panties, try to do my hair, force myself to look alive, visit a grocery store, and make it to our Easter event on time.  My daughter needed this day out of the house to play with her friends at the park, and I needed her to run out some of her energy without needing me every two seconds.

I’d waited a week for lab results, knowing they were going to show I needed an increase in meds.  I’d been extra sluggish and lacked motivation to do more than sleep.  I was a walking zombie, which I knew wasn’t good for the baby I had recently found out I was going to have.  (Yes, this is also how I’m announcing my second pregnancy to my readers.  I was on the phone back and forth with doctor’s offices trying to make immediate appointments and waiting for call backs on questions I had.  And, while I was doing my hair, my father in law called.  I had to let it go to voice mail, otherwise I was never going to get out the door in time to pick up what we needed at the store for the party.

By the time we arrived at the park for our event, I was tired, frazzled, and was still waiting to get things cleared away for my med increase.  My daughter had spent the morning crying.  Being at the park with her friends wasn’t as much relief from the dramatics as I had hoped.

Finally, she was playing on the playground and I noticed her making friends with a girl, slightly older and not much bigger.  I was amazed and impressed that my daughter was actually making friends on her own… and not with a girl in our playgroup.  I was somewhat relieved as I watched her follow her around giving me a few minutes of peace as I continued to wait on hold.  Then I watched this new little girl take a misstep, slip, and land on her bottom.  She got up and chased down my daughter to whine at her like it was her fault.  I was annoyed, but I let it go when I heard my daughter say “It’s okay, it happens.”  (Darn right, I didn’t raise a wuss!)

Much of the time, I let her continue playing with this little girl while I was still playing phone tag with the doctor’s offices.   My frustration with the day continually builds.  All the while, watching the girls play and witnessing the other little girl whining about some random mishap or another.

Finally, I witness this girl coercing my daughter to use monkey bars which were not intended for such small children.  I hear her say “Don’t worry, I’ll catch you.”  Here I am on hold, rushing over to stop my daughter from attempting the monkey bars.  At the same time, trying to explain to the other girl she’s not big enough to catch her if she falls.  At that moment, my daughter begins falling.  As I try to grab her to save everyone from another whiny moment, my phone slips from between my shoulder and ear, bumping my daughter on the head.  And, wouldn’t you guess it?  Right into the other girl’s face.

My daughter’s immediate reaction? “I’m okay!”  The other girl’s?  Yeah, you guessed it … more whining.  I try to make sure everyone is okay and apologize.  I felt horrible and looked around for the girl’s mother, who couldn’t be found.  The girl ran off whining and I finally gave up looking for mom.  A few minutes later, the little girl was back, still whining and pointing out some other person that she believed hurt her.

It’s not bad enough, I’m STILL on hold for the doctor’s office.  I need these questions answered and an appointment made.  But, now I have to step in to make sure someone doesn’t get blamed unnecessarily.  I walk over to the mom and start with an apology and explain what happened.

The shock came over me when she asked “Because you were on the phone?”.  I didn’t have it in me to defend myself.  Nothing good was going to happen if I decided to snap back at her about her disappearance.  Though, I’m sure pointing out her audacity for judging my phone usage while wearing a Bluetooth headset in her ear would have been hilarious.

To the mom who judged me for being on the phone,

I am typically not on my phone enough to warrant the purchase and use of a Bluetooth headset for myself.  I don’t usually spend my time at the park with my daughter while on the phone.  There were extenuating circumstances that had to be handled for the health of myself and my new growing baby.  Not that I owe anyone an explanation, but I MOST DEFINITELY do not feel as though I owe it to you.

You! The mother with a Bluetooth earbud, who couldn’t be found every time her child whined.  You have no right to judge me.  I was actually trying my best under the circumstances to be there for my child.  In fact, no mother deserves to be judged the way you did.

What I should have told you at the time:  You came off as highly hypocritical for judging me.  Having a Bluetooth in your ear and your absence made your criticism less effective and more bitchy.  It seemed pretty obvious you were more occupied than I was.  I mean, it took your daughter a few minutes to even find you.

So, you’re welcome for being present and trying to help these kids.  You’re welcome for having someone else listening to your whining child while you were too busy to even notice.  And, you’re welcome for my ability to bite my tongue at the time.  I really would have loved nothing more than to call you out on your hypocritical judgment of me.

Spill it!  Have you ever dealt with a hypocritical judgment from another mom?  How did you handle it, or how do you wish you had? 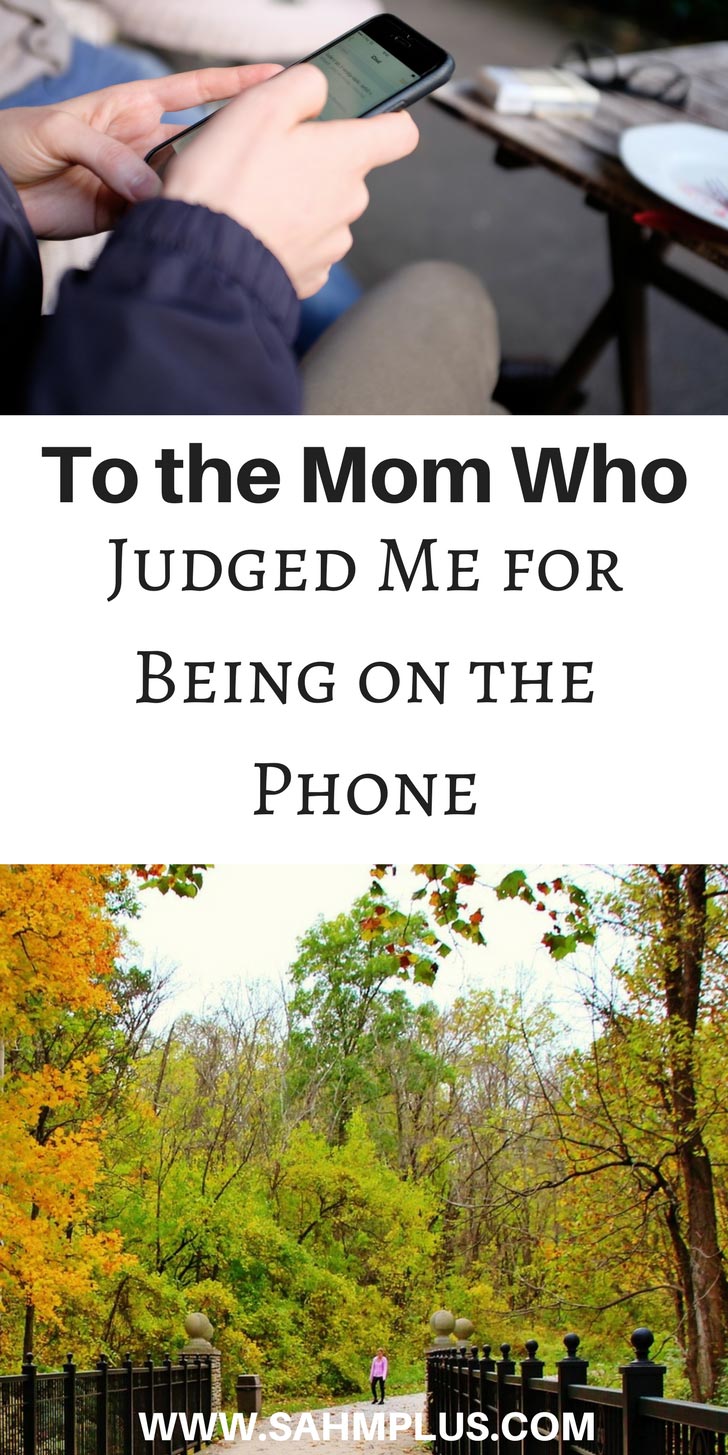 15 of the Best Posts About the Perfect Housekeeping Schedule

15 Easy Chicken and Rice Dinners You Need to Try

Working Mom Guilt is Real: How to Deal

Am I a Good Mom? The Best Response...

How Do You Define What a Good Mom...

7 Ways I Prioritized Myself and Ditched the...

How 1 Mom Survives as an Introverted Mom

6 Subscription Boxes for Moms Who Need to...