written by Ivy B March 16, 2017
This post contains affiliate links which may earn me commissions should you click through them and take certain actions. As an Amazon Associate I earn from qualifying purchases. See full disclosure here.

I love having a child who loves dinosaurs.  It’s possible that our love for dinosaurs is being transferred to the boy too.

Have you ever wondered what you can do with dinosaur obsessed kids?  I have too!

I came across Jurassic Quest recently and knew this was something we needed to do.  I immediately contacted the powers that be and partnered with Jurassic Quest to share our experience with you!

Let me first re-confess that it’s my fault my children are obsessed with dinosaurs!  When my daughter began expressing interest in dinosaurs, I made certain I exposed her to lots of exciting dinosaur stuff, including learning Spanish with Dino Lingo, brushing up on dinosaur terminology, and reading tons of dinosaur books.

From the time she was a toddler, S began her large collection of dinosaur toys.  My son, who is now 15 months, loves playing with her toys and pointing out dinosaurs when he sees them.  And, I get to be a kid at heart.  So, we all win here!

Anyway, back to Jurassic Quest!

I didn’t tell my daughter we were going.  I tend to let things stay a complete surprise until the day of.  However, having trouble containing my own excitement, I needed to find a way to express something about the day.  The morning of our adventure, I started her out with Dinosaur Egg oatmeal.  As we sat there, I asked how cool it would be if we could go back in time to visit the dinosaurs.

“I think we should turn the Jeep into a magic Jeep, you know, like the Magic School Bus.  Then, maybe we can travel back in time to see real dinosaurs.”

“I know! But, if we went back in time to when they did exist …  well, wouldn’t it be fun to maybe touch a baby dinosaur or ride on a big one?” 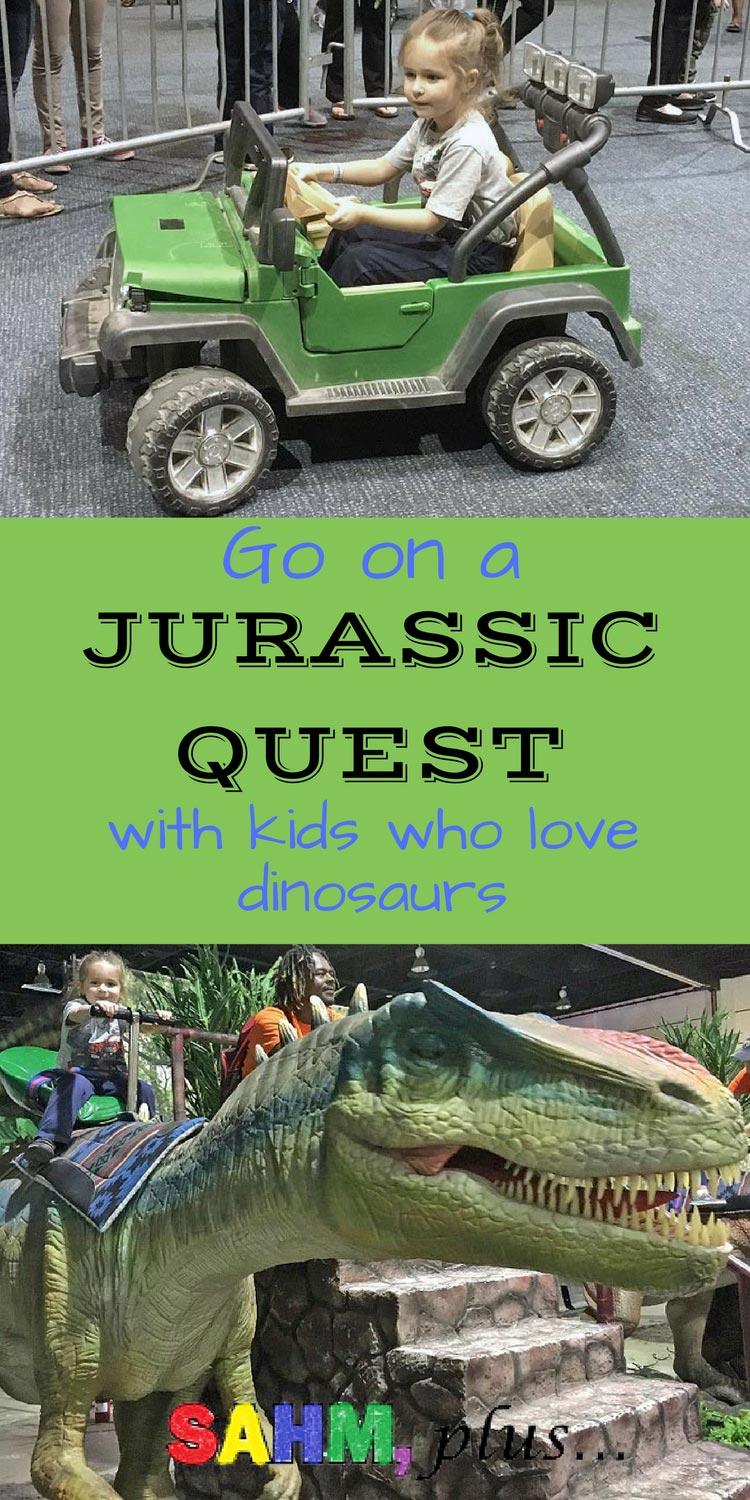 *Disclaimer: We were provided free tickets in exchange for this post.  All opinions expressed here are my own.  Be sure not to construe the information provided here as definitive and always fact check for yourself!

What is Jurassic Quest?

Jurassic Quest is a Dinosaur Adventure featuring over 80 life-size and anamatronic dinosaurs.  The whole family will enjoy interacting, learning about, and even riding dinosaurs with their admission.  Their are other dinosaur related activities and crafts for kids of all ages to participate in.

Essentially, I like to think of this as a seriously cool dinosaur exhibit … way better than what you’d experience in a museum!  You’re not going to be reminding the kids not to touch every two seconds … in fact, you’re going to be encouraging it!

To me, envisioning these massive creatures roaming the earth gives me goose bumps.  Having visited a place in Texas with fossilized dinosaur tracks in the river, I’m overcome with a highly active imagination.  Jurassic Quest helps me bring my imagination to life.  I can’t even speak for the kids. 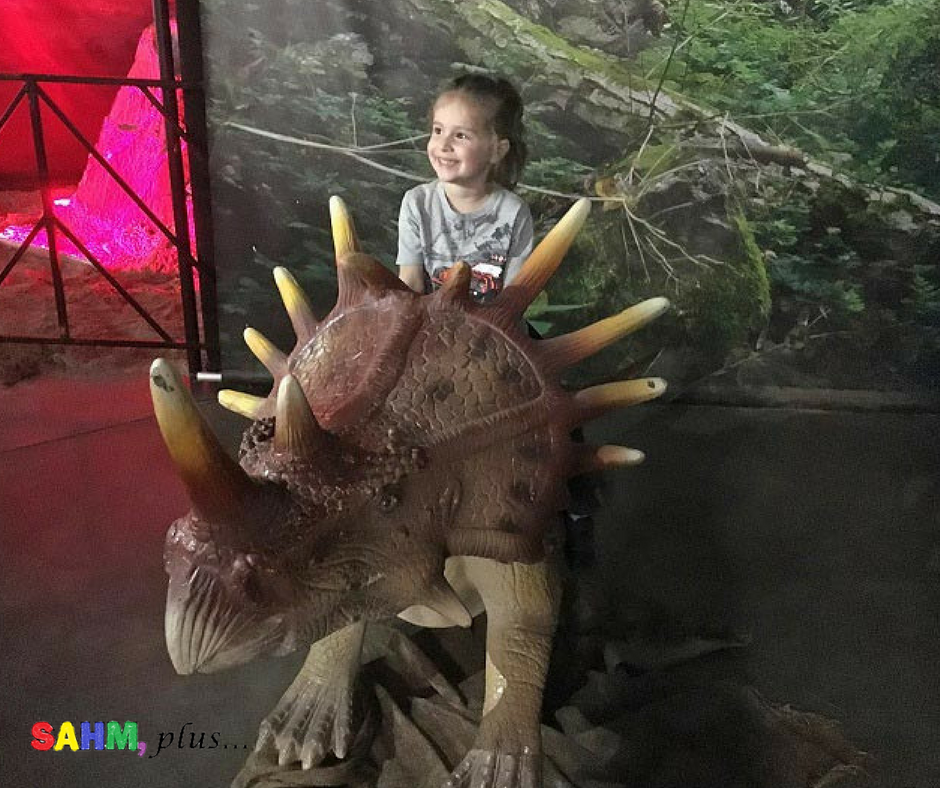 The Skinny on Jurassic Quest

That’s not exactly an appropriate phrase to use in such an event, huh?  Maybe I should have titled this part “the low-down”?  Nope, that doesn’t work either.

You get my drift… let’s get to the good stuff.

I packed up the normal overabundance of supplies, including some semi-healthy Trail Mix Cookies … because toddler and 5 year old. ‘Nuff said.  I also brought along my dad, because Hubby had other plans and I was certain this would require he extra hands.

When we arrived, my daughter wasn’t convinced the magic worked.  I had to keep telling her that maybe the magic was slowly taking over the city…  When we walked into the building, her eyes widened and she began pointing it all the dinosaurs.  We entered the building closest to the dark side where the exhibits were.

We took a bit of time visiting each of the like-like animatronic exhibits.  My goodness were they amazing!!  My daughter, though, quickly reminded me that they weren’t real.  Ugh… too smart, I tell you.

Eventually we moved on to the activities. She ended up on two dinosaur rides, doing a Pterodactyl craft, driving a Dino scooter, and going on the large climb and slide bounce house. 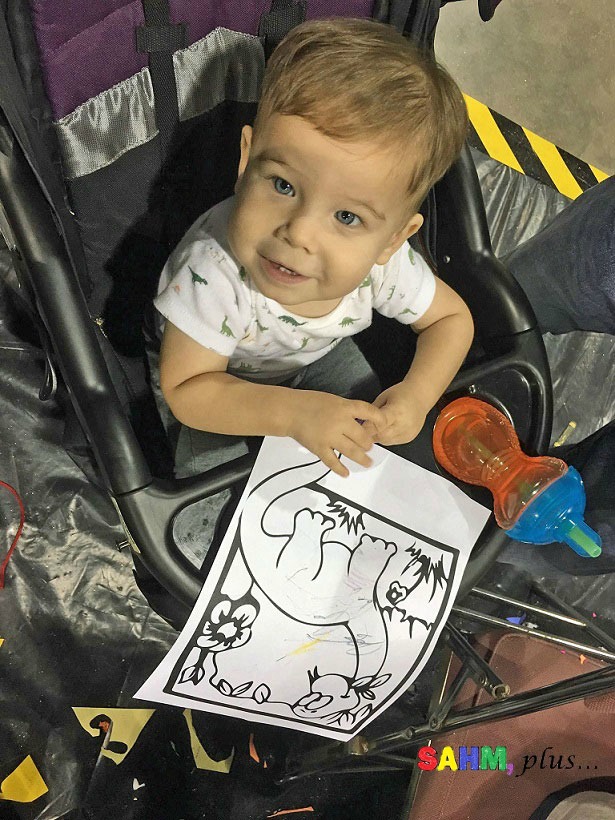 A bit of truth – Cost of Jurassic Quest

As always, you know I have to be real.

S had the VIP pass, which was supposed to include unlimited rides and activities.  While the VIP pass is the best deal if you’re planning on letting the kids ride, it’s not as amazing as it sounds.  Unless you can spend the entire day (from open to close) at the event, you’re not likely to get unlimited anything.

In the 5 hours we were there S was able to do 5 activities, like I mentioned previously.  Each of those activities, she was only able to do once.  And, only 4 of those activities were once that you’d have to pay an additional $5 a piece for if you had the standard ticket.  That was a bit of a bummer, to be honest.  And, I kept having to remind her that it’s just like waiting in line at Disney.

To be fair, if you do the math, getting a standard ticket and doing 4 rides would have cost a total of $40 VS paying the $29 VIP which would have covered those 4 rides.

The adult tickets, though are kind of a rip off unless you actually plan to do the dino crafts and science activities along with your children.  And, I mean, take home your own art LOL.  Still, you’re basically paying to walk around and escort your kids.  Come on guys … you know that’s what parents do!

Admission to Jurassic Quest for the Jacksonville, FL location was as follows:

Be sure to check your location for accurate ticket pricing!

Additionally, you should follow Jurassic Quest on their social media channels!  I found out before we left Saturday that they were only doing online sales instead of allowing walk-up sales.  It appeared they were expecting the event to sell out for the weekend.  I wouldn’t have known this had I not been following them!

Over 30 Indoor Activities for 3 Year Olds...

Things To Do At Home With Kids

You Need to See These Places in Tampa...

Should You Visit SeaWorld With Your Kids?

Oh man, my kids would love this and it is coming here! We may have to check this out!

yes! And let me know how it goes. I can’t believe just how busy it was here!

I can’t wait til it comes back to Indiana , my son and I wanted to go so bad but it just was not in the budget at the time .

Oh, I hope you get a chance to go this time!