written by Ivy B December 8, 2014
This post contains affiliate links which may earn me commissions should you click through them and take certain actions. As an Amazon Associate I earn from qualifying purchases. See full disclosure here.
When my daughter was younger, I wasn’t a fan of allowing her too much television or sitting idly in front of electronics.  I was prone to limit the time my child spend on them.  For whatever reason, electronics made her whiny and unruly.  It was terrible!

But, I had one of those weeks.  I broke my own rules on limiting access to electronics and sitting idle watching videos.  For a few weeks, the kiddo was whiny about everything.  She was driving me insane.  (You know it’s okay to admit these things publicly, right?!  Maybe I just say that because I need to feel better about it)  I couldn’t really stand it anymore.  I’d entered the year of the threenager.  It didn’t matter if we were busy doing school work, coloring, playing, eating … she wasn’t happy with anything.  For a while there, she complained with “I don’t feel good” if she was being reprimanded for her behavior.  She was seeking pity … I know this because she wouldn’t ever say that as long as things were going her way. 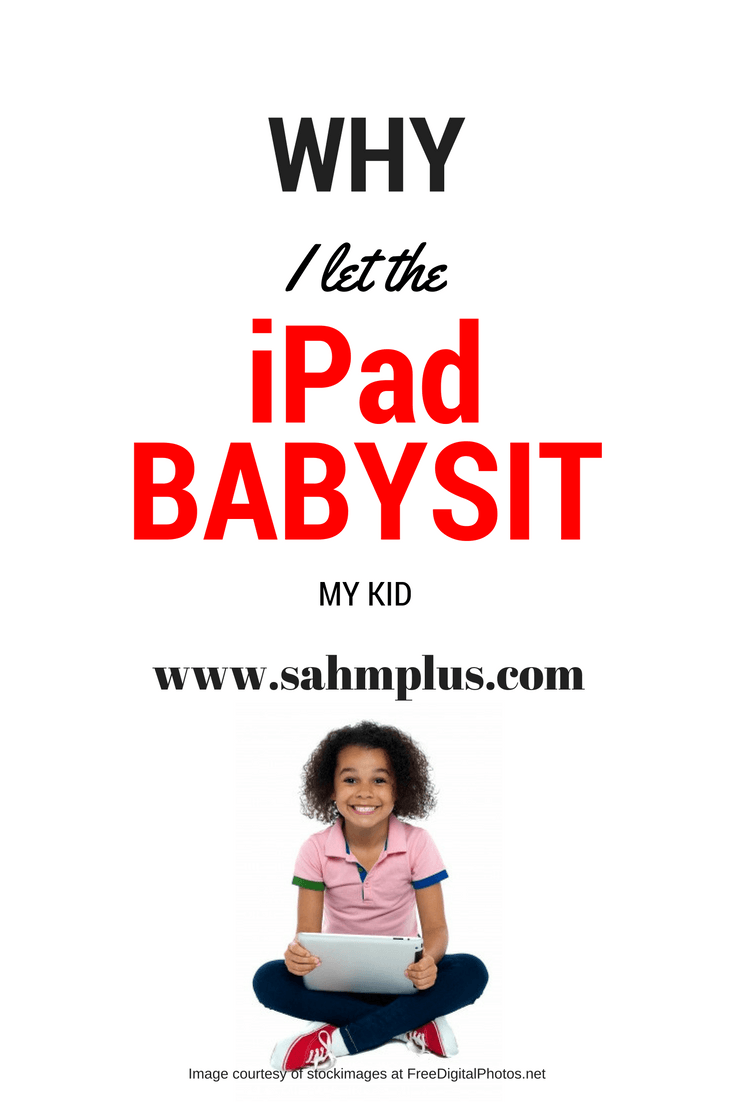 Why I let the iPad babysit my kid

Finally, after about two weeks of disagreeing and being totally incapable of making the kiddo happy, I gave up.  I said “screw the studies on limiting screen time”.  I just let her sit playing ABCMouse on her iPad or watching videos because it was the only thing that kept her quiet and happy.  I needed the peace and quiet and the ability to regain some sanity.

So, for a couple days, I let the iPad babysit my kid.  I’d interrupt for food, potty breaks, and quiet time (which didn’t include iPad time so that she could break away from the screen for a bit).  Occasionally, I’d check in to see if she wanted to do other activities.  But, the times she was busy on the iPad were the most peace I’d had in a while.  I was able to get some cooking and cleaning done and life didn’t seems as dramatic and terrible.

I’m guessing this is some sort of insane 3 year old phase as I’m finding there are just some days I have to resort to the iPad sitter.  Other days, she can go all day reading, playing, or doing crafts without so much as a whine.  But, the days she can’t, she’s off the charts with her whining and crying.  Seems like there’s no in-between which leaves me on edge.

Thankfully, I loaded her iPad up with mostly educational apps, so I didn’t feel some other kind of guilt for her sitter being nothing but fluff.  At least her time was spent learning, even if she thought it was all just fun and games.  The only real trouble I’ve had with this approach is getting her to stop relying on the iPad when she’s in a better mood.

Tell me: When your kiddo is driving you insane, what techniques, tactics, or devices do you use to get some peace and regain your sanity?  Have you ever let your iPad babysit your kid?

Join Me on Influenster during #FriendFlurry – Get FREE Stuff to Review

[…] I’ve been known to let the iPad babysit my kid(s), I’m aware of the issues too much screen-time can cause.  This was discussed […]