written by Ivy B March 25, 2014
This post contains affiliate links which may earn me commissions should you click through them and take certain actions. As an Amazon Associate I earn from qualifying purchases. See full disclosure here.
So, most board games and games, in general, aren’t labeled for children under 3 years.  That wasn’t feasible for us, so we started baby girl on games for Christmas (a few months after turning 2).  I’ve always taken the approach at starting her on games and toys that were labeled for an older age group by about 6 months to 1 year.  Truthfully, I recommend it for everyone simply because buying a toy for a child’s age means they won’t get as much use out of it.  You can always adapt play FOR your child’s age and have them grow into it, rather than having to toss (or sell) a toy a couple months down the road.

Anyway, that’s how we ended up on games.  Right now, one of her favorite games is Go Fish from Playchest Games.  She’s 2.5 and enjoying the game (rated for 3+) immensely.

While the box states a couple benefits of game play, I have a few extras to add to the list: 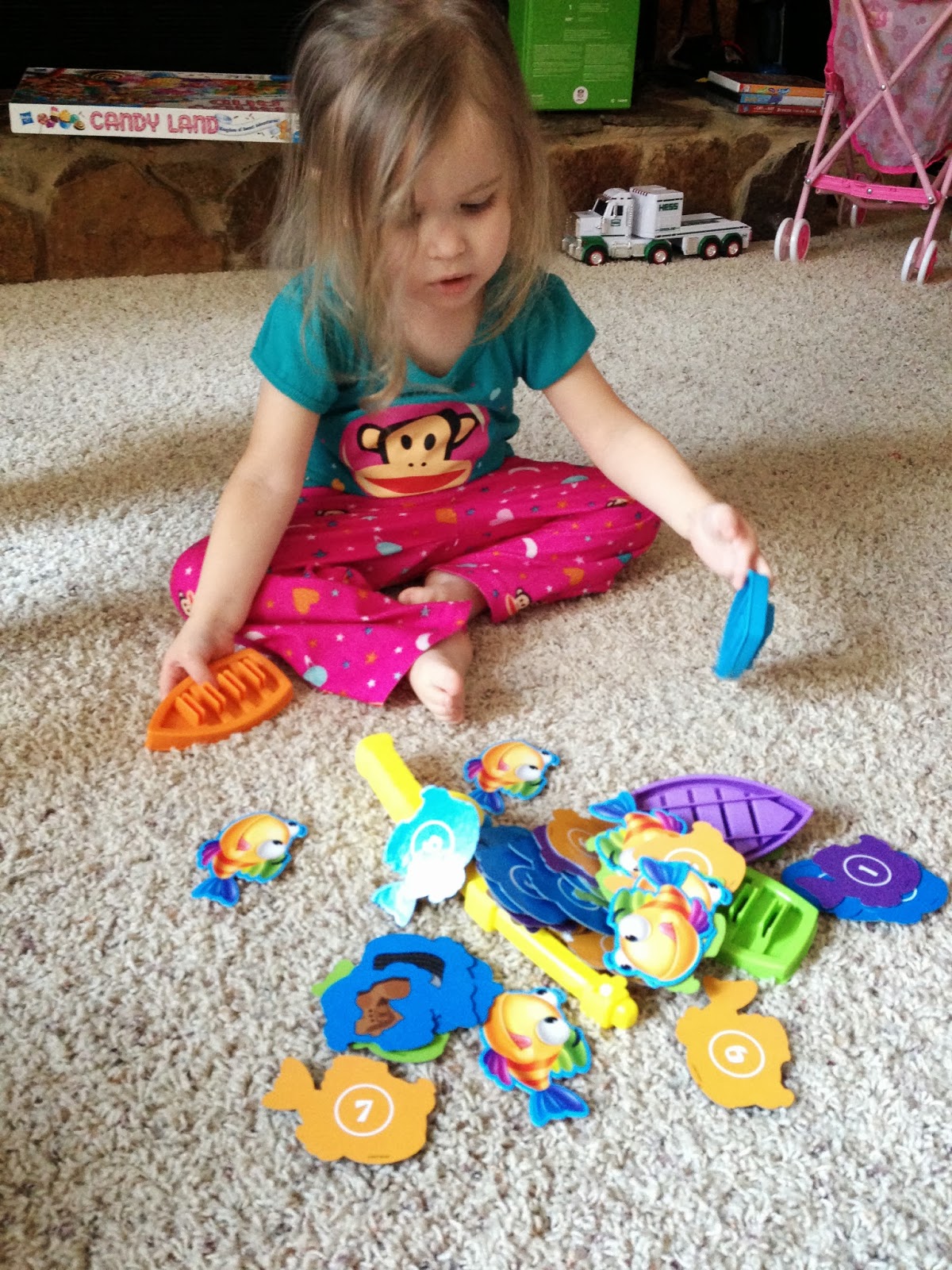 As a family, we sit down at night to play.  She’s learning to take turns and finally starting to understand how someone WINS when they fill their boats with 4 like-colored fish.

I added “attention & focus” to the list because we have to remind her to pay attention to the fish we draw and put down, in order to work on the memory skill and pick up the colored fish she needs when it’s her turn.  I know she’s young, but without directing her attention, she’d be all over the place until it was her turn, and won’t know to pay attention to her fish.  If she’s too far gone, we just let her have fun and pick whatever she wants.

And, while we always have a winner, we make sure that everyone places.  1st, 2nd, and 3rd, that way she doesn’t become discouraged with play.  We do try to make a huge fuss when she WINS 1st place so that she understands there are perks to winning.

* You catch fish with a rod, and a worm with a suction cup
* Best played on a hard surface – we typically play on the carpet which gives enough that getting the suction cup to hook a fish takes a little more work for a little kid.
The table works great if your kid isn’t all over the table, but I could see playing this on a hard floor.  Place pillows for seating comfort.  That would be cute.
* Boats feel like durable plastic
* The fish cards could be bent with a little force.

Finally, because of her age, we often take out the colored fish that no one needs.  It can be too distracting and divert her attention when making the game take longer to play than necessary.

Hey Baby! An Adorable and Informative Book About...

What Kids Really Need to Know About Making...

Warning! You Need to Know These Truths About...

Using the Gold Fever Package with Your Family...

How to Easily Ditch Toxic Toothpaste That Can...